PHOENIX, Ariz. — August 22, 2022 — Nonalcoholic fatty liver disease (NAFLD) is both increasingly common and potentially deadly; yet its causes remain poorly understood. Now, a collaborative team of researchers at the Translational Genomics Research Institute (TGen), part of City of Hope, and Temple University has uncovered a link between decreases in an enzyme that makes choline in the liver —an essential nutrient for humans— and severity of NAFLD. 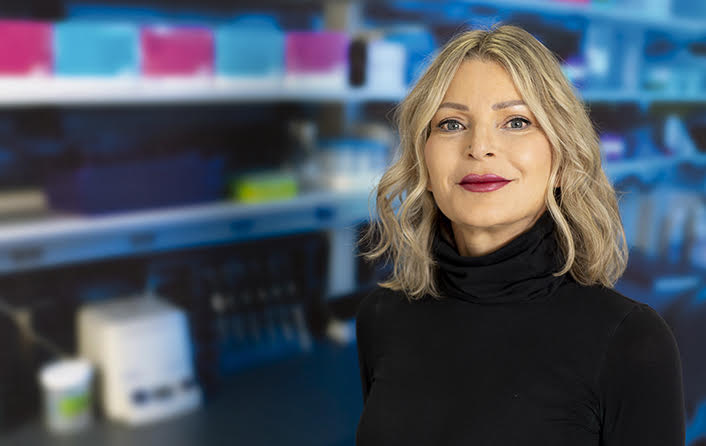 NAFLD is an umbrella term for a wide range of  conditions caused by accumulation of excessive fat in the liver. In many patients, NAFLD can progress to a condition called nonalcoholic steatohepatitis (NASH), characterized by liver inflammation and fibrosis, which in turn increases their risk of developing more lethal complications such as cirrhosis and cancer. NAFLD is one of the most common indications for liver transplantations in the United States.

The study results, published this week in the International Journal of Molecular Sciences, suggest that regulation of choline, which is an essential nutrient we usually obtain through our diets, is absolutely critical for the normal, healthy functioning of our livers. The sole source of choline made in the liver is through the activity of an enzyme called PEMT. Without sufficient choline, fat is unable to be transported out of the liver.

“This collaboration has provided insights that implicate choline deficiency, as a result of decreased PEMT in the liver, as a potential cause of both NAFLD and worsened fibrosis in patients who have progressed to NASH. Low PEMT expression in the liver may predispose some individuals to rapid hepatic fat accumulation because they are not able to get fat out of the liver efficiently,” said Johanna DiStefano, Ph.D., a Professor in TGen’s Metabolic and Fibrotic Disease Program and the study’s senior author. “Complicating that further, the modern diet of heavily processed food may not provide as much choline as our bodies need,” DiStefano added.

Key to the study was a large, well characterized patient cohort, encompassing the full spectrum of NAFLD disease. The researchers were also able to replicate their findings using independent cohorts. Many past investigations suffered from small sample sizes and overreliance on extreme NAFLD phenotypes, or observable characteristics.

“The cohort size and availability of data across the spectrum of NAFLD allowed for the significant results shown,” said TGen Research Assistant Professor Ignazio Piras, Ph.D., the paper’s first author. “To our knowledge, this is the first time the relationship between PEMT genotypes and hepatic PEMT expression has been explored.”

Augmenting their data with banked gene expression information from NIH and international databases, Dr. DiStefano’s team looked at 20 known DNA changes that alter how PEMT functions. After completing their statistical analysis, the team determined that —surprisingly— no prior study implicated the changes they found to be associated with NAFLD symptoms, including one that controls what may be the key PEMT variant capable of impacting all NAFLD conditions.

A correlation was found between poor PEMT expression and obesity—a novel observation that could help to bring a new subset of patients into risk-monitoring. Low PEMT levels were previously believed to align with low body mass index or BMI.

Analysis of samples from patients suffering from NASH revealed significantly lower PEMT expression than that measured in healthy controls. Patients with liver inflammation were also found to have significantly decreased PEMT, as were those with fibrosis.

The team also observed a significant decrease in PEMT expression across the histological spectrum, from normal liver histology to fibrosis. Expression data derived from RNA sequencing revealed a similar pattern within the range of fibrosis severity, with complete cirrhosis corresponding to lower PEMT levels than incomplete cirrhosis and bridging fibrosis.

Dr. DiStefano and her colleagues emphasized that these discoveries are not final answers, but open doors to future studies.