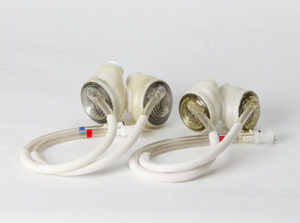 The SynCardia Total Artificial Heart in the 70cc (at left) and 50cc TAH-t sizes.

EKN Duisburg-Nord, a leader in treating heart failure, is the first device-only implantation program to reach 50 SynCardia Total Artificial Heart implants, which include both the 70cc and 50cc TAH-t sizes. Most SynCardia Certified Centers combine a device program with a heart transplant component.

“Our work has proven that the 50cc SynCardia TAH-t is meeting the needs of smaller patients,” says EKN Duisburg-Nord Prof. Dr. Reiner Körfer. “We are able to save lives and get these patients stable and strong enough for a donor heart transplant at another medical center.”

Like a heart transplant, the SynCardia Artificial Heart is the only approved device that eliminates end-stage biventricular (both sides) heart failure. This fatal condition results when the native heart’s two ventricles can no longer pump enough blood for a patient to survive.

SynCardia Systems, LLC in Tucson, Arizona is a medical technology company focused on developing and manufacturing the SynCardia temporary Total Artificial Heart (TAH-t). The SynCardia TAH-t is an implantable system designed to assume the full function of a failed human heart in patients suffering from end-stage biventricular (both sides) heart failure.

The SynCardia TAH-t is the only total artificial heart that is commercially available in the United States, European Union and Canada for use as a bridge to donor heart transplantation.

More than 1,625 implants of the SynCardia Total Artificial Heart account for over 550 patient years of life on the device. Since January 2012 more than 600 SynCardia Hearts have been implanted.

The youngest patient to receive a SynCardia Heart was 9 years old; the oldest was 80 years old. The longest a patient has lived with a SynCardia Heart and received a successful donor heart transplant was nearly four years (1,373 days).