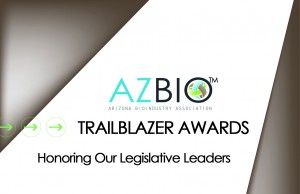 The Arizona BioIndustry Association (AZBio) will honor 11 Arizona Legislators on December 11, 2014 for their service to the community and for championing research, education, innovation, the growth of Arizona’s bioscience sector and ensuring that Arizona patients benefit from life science innovation.  The honorees will be recognized by the leaders of Arizona’s bioscience and healthcare community at the 2014 AZBio Trailblazer Awards during a special appreciation luncheon for members, elected officials and legislators featuring a special keynote by the Honorable James C. Greenwood, President and CEO for the Biotechnology Industry Organization (BIO).

“Arizona’s bioscience sector is leading the way both in advancing science and in job creation” shared AZBio President and CEO, Joan Koerber-Walker.  “While our leading educational, research, and industry partners are making it happen on the front lines, we rely on the support of our legislators and elected officials to clear the path for growth with a commitment to quality education, scientific discovery, and a business environment where companies are attracted to Arizona, created in Arizona and most importantly choose to stay and grow here.”

Each year, AZBio shares with the community the key factors that lead to growth in this vital economic sector.  The 2014 Trailblazer honorees were selected based on their engagement with the bioscience community as well as committee and voting records on key issues that shape the key bioscience growth factors. 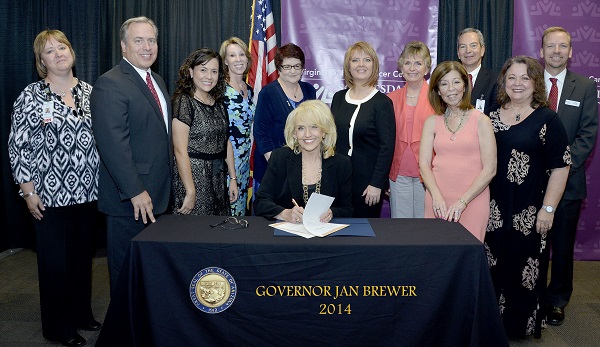 “Ensuring that Arizona patients benefit from the benefits of the life sustaining and life saving innovations our industry delivers is equally important,” shared Koerber-Walker.  “A great example of how Arizona benefits  when our industry, patient groups, and legislative leaders work together was H 2078, the Fair Access to Cancer Treatment (FACT) Act″ shared Koerber-Walker.  “This legislation passed unanimously through both the Arizona Senate and the Arizona House ensuring that cancer patients have access to their medicines no matter what form they may be in when  it was signed into law by Governor Brewer this year.  We are greatly appreciative to everyone who came together at the Capitol to make this happen.”

Other examples of how the Arizona Legislature championed key issues for our life science industry and Arizona patients included:

The 2014 AZBio Trailblazer Honorees are:

About the Arizona Bioindustry Association (AZBio)