Roche (SIX: RO, ROG; OTCQX:RHHBY) announced today that the U.S. Food and Drug Administration (FDA) has approved the VENTANA ALK (D5F3) CDx Assay1 for use on the VENTANA BenchMark ULTRA automated slide stainer. The assay is a companion diagnostic to aid in the identification of ALK-positive lung cancer patients who are eligible for treatment with Pfizer’s FDA-approved therapy XALKORI®(crizotinib).2

The VENTANA ALK (D5F3) CDx Assay was approved in 2012 in countries accepting the CE mark and by the China Food and Drug Administration (CFDA) in 2013. It received FDA Class III approval in June 2015 for use on VENTANA BenchMark XT system. Due to an established presence of the BenchMark ULTRA system in laboratories globally, this latest approval means even more non-small cell lung cancer (NSCLC) patients may benefit from improved treatment options.

“ALK is an important biomarker found in non-small cell lung cancer. Detection and inhibition of this biomarker can help shrink tumors in some ALK-positive patients,” said Ann Costello, Head of Roche Tissue Diagnostics. “The FDA’s approval of the VENTANA ALK CDx Assay on the VENTANA BenchMark ULTRA system underscores our continued commitment to expanding the identification of NSCLC patients who may be eligible for improved treatment options.” 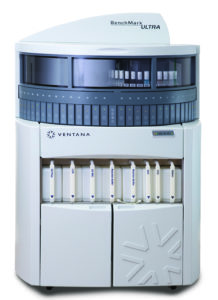 Lung cancer remains the leading cause of cancer deaths with an annual estimated 12.9 percent of all new cancer cases and nearly 1.6 million deaths worldwide. NSCLC accounts for approximately 85 percent of all lung cancer cases.3 During the past three decades, lung cancer has shown the least improvement in survival rates when compared with other cancers.4

For more information on crizotinib, visit the Pfizer website.

Roche is a global pioneer in pharmaceuticals and diagnostics focused on advancing science to improve people’s lives.

Roche is the world’s largest biotech company, with truly differentiated medicines in oncology, immunology, infectious diseases, ophthalmology and diseases of the central nervous system. Roche is also the world leader in in vitro diagnostics and tissue-based cancer diagnostics, and a frontrunner in diabetes management. The combined strengths of pharmaceuticals and diagnostics under one roof have made Roche the leader in personalised healthcare – a strategy that aims to fit the right treatment to each patient in the best way possible.

Founded in 1896, Roche continues to search for better ways to prevent, diagnose and treat diseases and make a sustainable contribution to society. Twenty-nine medicines developed by Roche are included in the World Health Organization Model Lists of Essential Medicines, among them life-saving antibiotics, antimalarials and cancer medicines. Roche has been recognised as the Group Leader in sustainability within the Pharmaceuticals, Biotechnology & Life Sciences Industry eight years in a row by the Dow Jones Sustainability Indices.

The Roche Group, headquartered in Basel, Switzerland, is active in over 100 countries and in 2015 employed more than 91,700 people worldwide. In 2015, Roche invested CHF 9.3 billion in R&D and posted sales of CHF 48.1 billion. Genentech, in the United States, is a wholly owned member of the Roche Group. Roche is the majority shareholder in Chugai Pharmaceutical, Japan. For more information, please visit www.roche.com.