Researchers at the University of Arizona have discovered a protein that prevents mosquitoes from hatching, opening the possibility of developing new drugs that could act as birth control for mosquito populations. 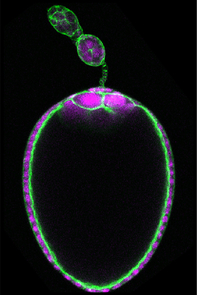 Depending on where you live, the buzz of a nearby mosquito can be a nuisance, or it can be deadly. Worldwide, more than 500 million people suffer from diseases transmitted by the blood-feeding insects, including malaria, Dengue Fever, Zika, and West Nile, and nearly a million deaths are attributed to mosquito-borne illnesses each year.

Researchers at the University of Arizona have discovered a protein in mosquitos that is critical to the process of producing viable eggs and could pave the way for “mosquito birth control.” When researchers selectively blocked the activity of the protein – which they named Eggshell Organizing Factor 1, or EOF-1 – in female mosquitoes, the mosquitos laid eggs with defective egg shells, leading to the death of the embryos inside.

In the report, published in the open access journal PLoS Biology on Jan. 8, the team showed that EOF-1 exists only in mosquitoes. Therefore, any drug developed to render the protein dysfunctional would only affect mosquitoes and no other organisms. 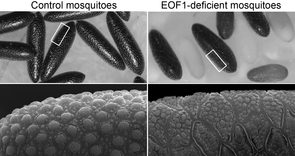 Eggs laid by mosquitoes treated with RNAi against the EOF-1 protein (right) and a control (left) display striking differences in their shells: Instead of a surface covered in regular bumps (each about 15 times smaller than the diameter of a human hair), EOF-1 deficient mosquitoes lay eggs in which this regular structure is disrupted. Lower images are magnifications of the egg shell structure. (Image: Jun Isoe)

The team, led by Jun Isoe, a research scientist in the lab of Roger Miesfeld, a UA Distinguished Professor and head of the Department of Chemistry and Biochemistry, is hopeful the approach might offer a way to interrupt mosquito egg formation and reduce mosquito populations in areas of human disease transmission without harming beneficial insects such as honey bees.

“We specifically looked for genes that were unique to mosquitoes and then tested for their functional role in eggshell synthesis,” Isoe says. “We think there are other discoveries to be made using this same species-directed approach.”

Isoe first used a bioinformatics approach to search for and identify genes that are unique to mosquitoes. None of those genes were previously known with regard to their function. The research team then created small RNA molecules that specifically inhibit each of the proteins the genes code for. Known as RNA interference, or RNAi, the technique works by suppressing messenger RNA molecules that serve as blueprints for proteins.

Each individual mosquito was screened for viable offspring. Out of the 40 mosquito-specific genes the team tested, only one, the EOF-1 gene, was found to disrupt eggshell formation and result in the death of the mosquito embryo.

A female mosquito needs a second blood meal in order to produce next the batch of fertilized eggs. Usually, the effects of RNAi injection last only through one egg-laying cycle, but in the case of EOF-1, the researchers were surprised to find that treated females could no longer produce viable eggs for the rest of their two- to three-week life span, even after three consecutive blood meals.

Images obtained through electron microscopy revealed that when mosquitoes are deficient in the EOF-1 protein, the females lay eggs with abnormal-looking egg shells. Although the exact function of the protein remains to be elucidated, Isoe and Miesfeld believe that EOF-1 might act as a master switch at the onset of the insects’ ability to produce viable eggs in response to a blood meal.

Based on these results, the team envisions a strategy using small molecule drugs that selectively interfere with mosquito EOF-1 in areas of the world where mosquito-borne human diseases are prevalent, resulting in eggs that never hatch into larvae.

“We think this strategy may have a much lower chance of harming other organisms than what is being used today,” Miesfeld says. “Since the days of DDT, we have known that mosquito population control works to reduce the incidence of human disease. This could be a next-generation tool that could be applied to bed nets and other areas frequented by mosquitoes.”

Of the more than almost 3,500 species of mosquitoes buzzing across all continents except Antarctica, three genera stand out as carriers of human disease: Mosquitoes of the genus Aedes transmit Yellow Fever, Dengue, Chikungunya  and Zika viruses; West Nile virus is spread by Culex mosquitoes; and Anopheles mosquitoes are carriers of malaria. To ensure that disruption of EOF-1 was not specific to lab-bred mosquitoes, Isoe tested it on a strain of Aedes aegyptimosquitoes collected from wild populations in the Tucson area and found their eggs to be similarly affected.

“The inhibitors currently available to control mosquitoes have been used for so long that the pests are becoming resistant to them,” Miesfeld says. “Our idea is to knock their populations down to a level where you can break the cycle of disease transmission between mosquitoes and humans.”

As a first step toward turning the discovery into an application that could be commercialized, the team has filed a provisional patent on the species-specific discovery process through the UA’s technology commercialization office, Tech Launch Arizona.

“An invention that can directly address mosquito-born illnesses like malaria, Zika and West Nile demonstrates how research being done by innovators throughout the University of Arizona can lead to solutions for the most pressing, critical problems of our day,” said Tech Launch Arizona Assistant Vice President Doug Hockstad.