The world’s first microbial nursery is Ferran Garcia-Pichel’s brainchild, a mobile lab designed restore arid lands in the Southwest. Garcia-Pichel is director of the Biodesign Center for Fundamental and Applied Microbiomics and professor in ASU’s School of Life Sciences. His plans to grow microbes and prevent dust pollution earned him recognition last fall as a finalist in the Governor’s Celebration of Innovation. 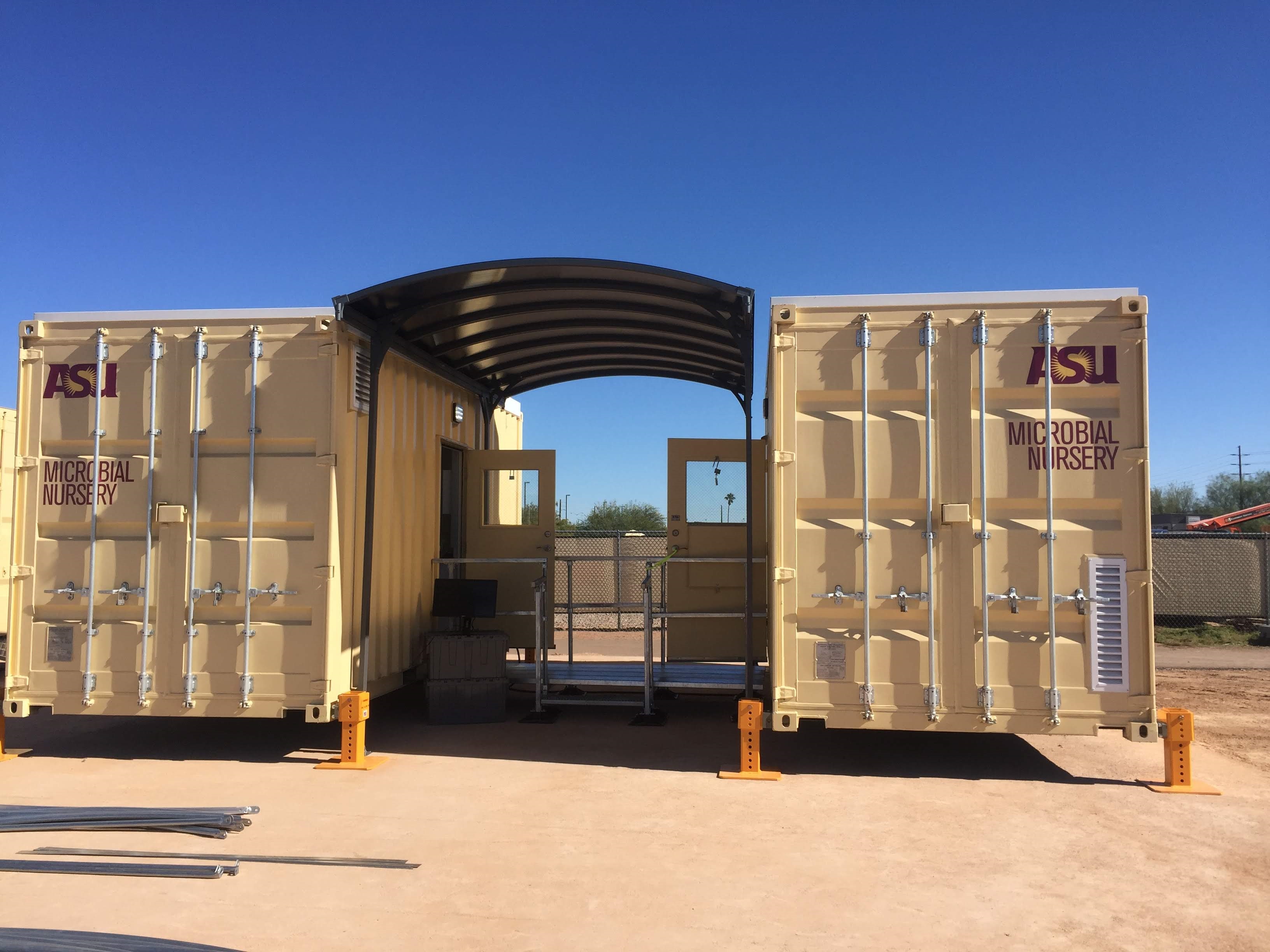 Microbiologist Ferran Garcia-Pichel has been on a mission to solve a particularly gritty problem: How can we keep the Earth’s natural topsoil tethered to the ground and out of the air – a particularly challenging problem in the desert, where haboobs and other natural processes can kick up some significant dust.

In Arizona, particulate matter is the top source of pollution. As dirt flies away, it becomes dust and pollutes the air, causing issues for public health and the environment. For example, the dust can trigger respiratory illness, and even significantly reduce the capacity of solar panels when it blocks out the sunlight.

Next Wednesday, May 8, Ferran-Pichel and his research team will unveil their solution: the world’s first microbial nursery. Garcia-Pichel is director of the Biodesign Center for Fundamental and Applied Microbiomics, a center that studies the effects of microbial communities on ecosystems like the human gut, deserts, marine waters and tropical islands. He and his team work with Center for Bio-Mediated and Bio-inspired Geotechnics, funded by the National Science Foundation.

The nursery is composed of three shipping containers — two 20 ft. and one 40 ft. — outfitted with the water, electricity and equipment needed to nurture microbial life. The nursery is essentially a mobile outdoor lab and soil restoration center, where researchers will grow native strains of microbes with a process that is faster than nature’s ability to repopulate the microbes that keep the soil in place, and will increase their population size and endurance.

Garcia-Pichel and his team have developed a process to improve soil retention in a way that doesn’t negatively impact native flora and fauna. However, scientists found it tricky to replicate outdoor conditions inside a lab.

“It was very hard for us to mimic the conditions that are relevant to a particular site in the laboratory or a stable greenhouse,” Garcia-Pichel said. “If it was hard to bring the conditions of the environment into a single lab, then the solution is to take the lab and bring it into different environments, allowing us to better mimic the local climate.”

The mobile microbial nursery will be ready to travel the Southwest, from Mesa to New Mexico. The first stop will be the Jornada Experimental Range near Las Cruces, New Mexico, where the team will work in collaboration with the U.S. Department of Agriculture. Then, the plan calls for the nursery to return to Mesa and work with nearby solar farms before traveling down to Tucson to work on degraded mine tailings.

In arid states, retaining the microbial soil crust can be particularly challenging. Cultivating cyanobacteria emerged as an effective solution. Cyanobacteria are a group of bacteria that obtain their energy through photosynthesis and have the unique ability to produce oxygen. As the microbes react to changing levels of light and water, they travel through the soil and excrete polymers that act as a bonding agent in the dirt, gluing it in place.

Garcia-Pichel’s team has spent years devising strategies to keep dust down to earth. “The traveling microbial nursery is a culmination of years of research to use basic scientific knowledge to restore degraded arid soil—using microbes,” Garcia-Pichel said.

Contractors from California built Garcia-Pichel’s microbial nursery to be easily moved as needed. The mobile nursery derived its name from nurseries where trees, the most popular tool for restoring soils, are grown. However, in desert rehabilitation, microbes reign supreme. Garcia-Pichel’s work in restoring desert soils was recognized last fall as a finalist in the Governor’s Celebration of Innovation.

“So many people have contributed to this, and we have so many partners that are invested in what the facility will be able do, that we want to celebrate the possibilities,” Garcia-Pichel said.

Garcia-Pichel hopes the grand opening will highlight sustainable solutions to arid land restoration. A significant benefit of the nursery-grown microbes is that once they are in the ground, they won’t require further human intervention or replacement.

The event will be held Wednesday, May 8, from 9-11 a.m. at Arizona State University’s Polytechnic campus in Mesa. Researchers will be on hand to explain their work. The event is open to the public, and guests are encouraged to RSVP. For more information and further queries, click here.

The National Science Foundation, Biodesign Institute and the Center for Bio-mediated and Bio-inspired Geotechnics have provided support for this project.