The Flinn Foundation hosted three Bioscience Roadmap luncheons on March 31st  in Phoenix, on April 1st in Tucson, and on April 2nd in Flagstaff  to highlight the growth of Arizona’s bioscience sector over the past year, with a special focus on progress in bioscience entrepreneurship and economic development. 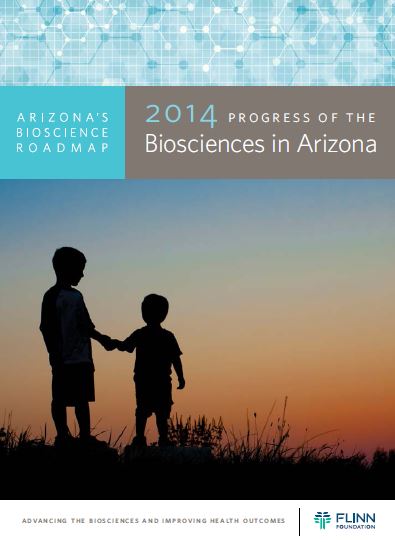 “2014 Progress of the Biosciences in Arizona” is now available. This report highlights the major bioscience developments of the past year.
Click the image to download the report.

“2014 Progress of the Biosciences in Arizona,” a new publication that features the major developments of the past year, was released at the luncheons around the state.

“These luncheons will showcase the impressive entrepreneurial spirit and momentum taking place throughout Arizona as we hear directly from the entrepreneurs who are leading the way and those working alongside them to help boost their startup ventures into flourishing bioscience companies,” said Jack B. Jewett, President and CEO of the Flinn Foundation.

The entrepreneurship theme aligns with the first goal of Arizona’s Bioscience Roadmap, which was updated a year ago—to form a hub of bioscience entrepreneurs and new enterprises across Arizona.

The luncheons continue a tradition that originated during the first decade of Arizona’s Bioscience Roadmap, which was commissioned by the Flinn Foundation in 2002 and updated in 2014 to guide the state through 2025.

In the second decade of the Roadmap, bioscience metrics in subjects such as jobs, wages, firms, and federal grant funding are being compiled and reported publicly every other year instead of annually.  Updated results to the metrics will be released at the 2016 luncheons.

Download “2014 Progress of the Biosciences in Arizona,” to get the full report.