Francis S. Collins, M.D., Ph.D., today announced his decision to end his tenure as the director of the National Institutes of Health by the end of the year. Dr. Collins is the longest serving presidentially appointed NIH director, having served three U.S. presidents over more than 12 years. 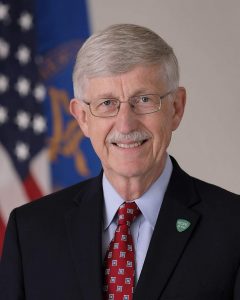 “It has been an incredible privilege to lead this great agency for more than a decade,” said Dr. Collins. “I love this agency and its people so deeply that the decision to step down was a difficult one, done in close counsel with my wife, Diane Baker, and my family. I am proud of all we’ve accomplished. I fundamentally believe, however, that no single person should serve in the position too long, and that it’s time to bring in a new scientist to lead the NIH into the future. I’m most grateful and proud of the NIH staff and the scientific community, whose extraordinary commitment to lifesaving research delivers hope to the American people and the world every day.”

A physician-geneticist, Dr. Collins took office as the 16th NIH director on August 17, 2009, after being appointed by President Barack Obama and confirmed by the U.S. Senate. In 2017, he was asked to continue in his role by President Donald Trump, and in 2021, by President Joe Biden. Prior to becoming the NIH director, Dr. Collins served as the director of the National Human Genome Research Institute (NHGRI) from 1993-2008, where he led the international Human Genome Project, which culminated in April 2003 with the completion of a finished sequence of the human DNA instruction book.

“Few people could come anywhere close to achieving in a lifetime what Dr. Collins has at the helm of NIH,” said Health and Human Services Secretary Xavier Becerra. “It takes an extraordinary person to tackle the biggest scientific challenges facing our nation — and under three presidents, amidst three distinctly different chapters of American history. Dr. Collins, master of scientific breakthroughs and scientific reason — from mapping the human genome to fighting the most devastating pandemic of a century — has routinely broken ground to save countless lives, while unleashing innovation to benefit humanity for generations to come.”

Known for his accessible, plain-spoken manner, Dr. Collins garnered broad bipartisan Congressional support for NIH research. During his 12-year leadership, NIH’s budget grew by 38%, from $30 billion in 2009 to $41.3 billion in 2021. Dr. Collins proposed and established bold initiatives — extending from fundamental basic science to translational science to focused projects — to tackle some of the most pressing health issues facing Americans, including Alzheimer’s disease, cancer, opioid use disorder, rare diseases and the COVID-19 pandemic.

Dr. Collins long envisioned that knowledge gained from the mapping of the human genome would be used to develop treatments tailored to every person’s unique genetics, environment and lifestyle. To spur research in the emergent area of precision medicine, Dr. Collins launched the All of Us Research Program, which is well on its way to enrolling one million people across the U.S. to provide their health data so that researchers can improve the way we prevent illness as well as treat the full spectrum of diseases and conditions. He also is the architect of several strong public-private partnerships such as the Accelerating Medicines Partnership to reduce the time from the identification of biological markers of disease to the development of treatments that target those pathways.

In concert with the Obama administration, Dr. Collins launched the Brain Research through Advancing Innovative Neurotechnologies (BRAIN) Initiative, a multi-billion-dollar effort to develop sophisticated technologies to understand the neuronal networks of the brain and what goes wrong to cause Alzheimer’s disease, schizophrenia, psychosis and other serious brain diseases. He worked closely with then Vice President Biden to launch the Cancer Moonshot Initiative to fuel innovation and speed new treatments to reduce cancer incidence and improve patient outcomes. Under the leadership of President Trump, Dr. Collins launched and galvanized the research and addiction communities around the HEAL (Helping to End Addiction Long-term) Initiative to address the national opioid crisis by improving treatments for opioid misuse and addiction and enhancing pain management. Working with both the Trump and Biden administrations to respond to the COVID-19 pandemic, Dr. Collins helped launch several game-changing initiatives, including the Accelerating COVID-19 Therapeutic Interventions and Vaccines (ACTIV) public-private partnership that developed a coordinated research strategy for prioritizing and speeding development of promising treatments and vaccines; the Rapid Acceleration of Diagnostic (RADx) program to create an innovation funnel for COVID-19 testing technologies; the Community Engagement Alliance (CEAL) Against COVID-19 Disparities to support partnerships in communities hardest hit by the pandemic and reduce health disparities; and the Researching COVID to Enhance Recovery (RECOVER) Initiative(link is external) to identify why some patients don’t fully recover from the effects of COVID-19 disease and develop ways to treat these patients or even prevent long COVID altogether.

All these efforts have set the stage for a new component of NIH, known as the Advanced Research Project Agency for Health (ARPA-H), proposed by President Biden and strongly supported by Dr. Collins. ARPA-H is currently under consideration by the U.S. Congress. Modeled after DARPA in the Department of Defense, ARPA-H is envisioned to support and conduct high-risk, high-reward biomedical and health research in a way that is radically different than NIH’s grant-based system. The aim of ARPA-H is to collapse barriers and catalyze the development of transformative, evidence-based, use-driven cures for a range of biomedical challenges, from the molecular to the societal.

On the policy front, Dr. Collins has tackled many long-standing issues that have hampered science. He bolstered policies and activities to address sexual harassment and structural racism, enhance accountability and transparency in clinical trials and ensure broad data sharing. He has been a champion of early-stage researchers, implementing numerous policies to enable their success in a hyper-competitive research environment.

He is an avid supporter of science communication, and the importance of making the findings of NIH research accessible to the public. He shares information about the latest NIH research via his blog, Twitter handle(link is external) and through many social media events. He is known for using music to convene people with different perspectives and for his parodies about science.

Dr. Collins will continue to lead his research laboratory at the NHGRI, which is pursuing genomics, epigenomics and single cell biology to understand the causes and means of prevention for type 2 diabetes. His lab also seeks to develop new genetic therapies for the most dramatic form of premature aging, Hutchinson-Gilford Progeria Syndrome.

About the National Institutes of Health (NIH): NIH, the nation’s medical research agency, includes 27 Institutes and Centers and is a component of the U.S. Department of Health and Human Services. NIH is the primary federal agency conducting and supporting basic, clinical, and translational medical research, and is investigating the causes, treatments, and cures for both common and rare diseases. For more information about NIH and its programs, visit www.nih.gov.