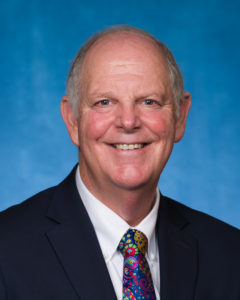 Tom O’Halleran was elected in 2016 to represent Arizona’s 1st Congressional District and was sworn into office by Speaker Paul Ryan on January 3, 2017.

A retired businessman and committed public servant, he served three consecutive terms as an Arizona State Representative followed by a term as an Arizona  State Senator. While in the Arizona Senate, O’Halleran served as Chair of the Higher Education Committee and Vice-Chair of the Health Committee. He received over 40 awards for his distinguished service while serving in the state legislature.

Arizona’s 1st Congressional District is one of the largest in the country based on land area and stretches from Flagstaff to the north and  parts of Tucson and Oro Valley to the South.  CD 1 is home to some of Arizona’s most innovative medtech employers including, Ventana Medical Systems, a member of the Roche Group in  Oro Valley and W.L. Gore and Associates in Flagstaff which together represent over 4,000 medtech employees.

Included in the Affordable Care Act (ACA) and launched in 2013, the medical device tax imposed a 2.3 percent sales tax on medical device supplies. The tax applies broadly to a range of products, including pacemakers, artificial joints, surgical gloves, and dental instruments. It does not apply to eyeglasses, contact lenses, hearing aids, wheelchairs, or any other device that the public generally buys for individual use.

The U.S. leads the world in medical technology, but the device tax threatens that leadership because it puts an additional burden on medical device innovators already struggling under the weight of America’s uncompetitive tax system. The tax is levied on medical device sales in the U.S. regardless of whether the company is making a profit.

“Patients and the U.S. economy are already benefitting from the temporary suspension of the tax, as medical technology companies have been able to reinvest those funds into new R&D, infrastructure improvements and new hiring” shared Scott Whitaker, president and CEO of the Advanced Medical Technology Association (AdvaMed).“But these benefits are not assured. In order for these benefits to continue, companies need the certainty of permanent repeal to support long-term planning that will allow for future patient innovations and job growth. “With bipartisan device tax repeal legislation now introduced in both the House and Senate, we urge Congress and the new administration to move swiftly on permanent repeal of this tax.”

We write to encourage you to consider fast-tracking consideration of H.R. 184, Protect Medical Innovation Act, authored by our colleague Erik Paulsen. President Obama already has suspended the medical device tax for 2016 and 2017, but it is scheduled to go back into effect in 2018. Our legislation to permanently repeal this tax would provide the certainty needed for the medical device industry to continue its research and investment in these critical life-saving innovations.

The medical device industry, which employs nearly 400,000 Americans, is vital to our health care and our economy.  The industry is comprised largely of small businesses.  Of the 7,000 medical device manufacturers in the United States, the vast majority employ fewer than 50 employees.  Many of these are startups that generate little to no sales revenue.

Imposing a 2.3% tax on revenue, rather than income, subjects the U.S. device industry to one of the highest corporate tax rates in the world. Unfortunately, as companies look to make cuts to offset the tax, one of the first items to go is research and development. This undermines the future of the industry and puts the discovery of new breakthrough medical technologies at risk. Additionally, the tax revenue generated from medical devices is approximately $2 billion annually. Relative to the federal budget, this represents roughly one half of one tenth of one percent of government spending. Repealing the tax will not have a meaningful impact on the budget, but a permanent repeal would be significant for these small businesses and their ability to continue to grow.

If this tax goes back into effect, consumers who rely upon these innovative devices that improve their health will ultimately suffer the burden.  The bipartisan support for this legislation demonstrates the recognition from both parties that reinstating this tax would negatively affect our constituents.

As freshmen members, we hope to work together to usher in a new era of cooperation in order to restore faith in our government institutions. Repealing the medical device tax is too important to our constituents and small businesses not to act immediately, and passing this legislation will demonstrate that we can come together with solutions. We ask that you consider moving H.R. 184 as soon as possible in order to give our nation’s small businesses the certainty they need.