Gholam Peyman, MD is being honored with the AZBio Pioneer Award for Lifetime Achievement. 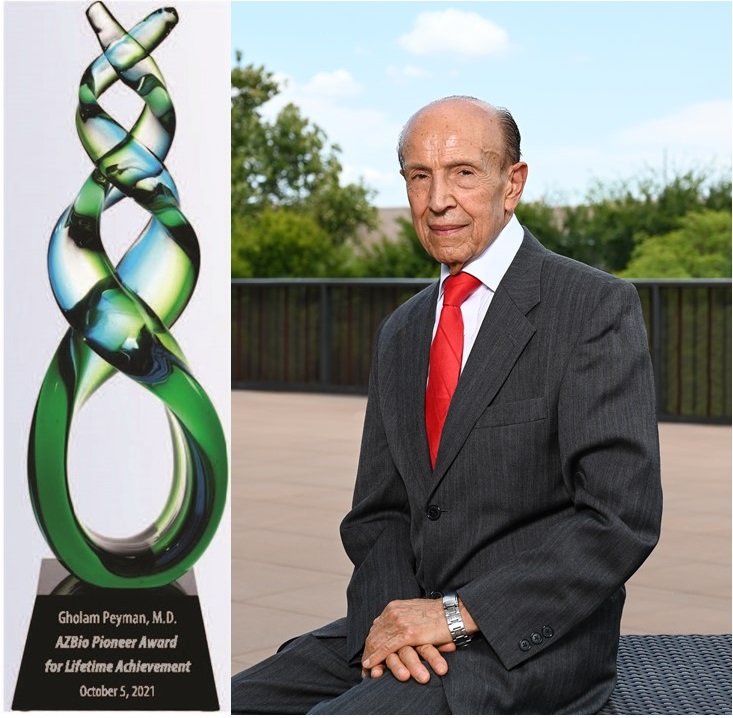 One of the most common elective surgical procedures is laser-assisted in situ keratomileusis.  More commonly known as LASIK eye surgery, the procedure is a safe and effective corrective eye surgery designed to restore a patient’s vison and prevent the lifelong need for contacts and glasses.

While you probably have heard of LASIK, you may not know that the inventor of LASIK eye surgery calls Arizona home.

Gholam A. Peyman, MD is an educator, innovator and retinal surgeon who is also a prolific and successful inventor.  For over four decades, Dr. Peyman has worked to improve surgical methods and has created revolutionary new treatment methods and modalities. Dr. Peyman has written and published over 850 scientific articles plus 10 books and scientific text. He has also trained more than 200 fellows in vitreoretinal diseases.

Gholam A. Peyman has, thus far, been granted 215 US patents, covering a broad range of novel medical devices, intra-ocular drug delivery, surgical techniques, as well as new methods of diagnosis and treatment.

Dr. Peyman was inducted into the American Society of Cataract and Refractive Surgery Ophthalmology Hall of Fame in 2005[ii] , received the Lifetime Achievement Award, American Academy of Ophthalmology in 2008, and in 2011 received the nation’s highest honor for technological achievement. The National Medal of Technology and Innovation (NMTI) is bestowed by the president of the United States on America’s leading innovators.  Dr. Peyman received this honor for invention of the LASIK surgical technique, and for developing the field of intraocular drug administration and expanding the field of retinal surgery.[iii] (An estimated 2.9 million intraocular drug injections are done yearly in the USA[iv]).

The Road to Arizona

Born in Iran, Gholam Peyman moved to Germany to study at the University of Freiburg where he received his M.D. in 1962, He completed his internship at St. Johannes Hospital (Diusburg, Germany) in 1964 and at Passaic General Hospital (Passaic, New Jersey) in 1965. He continued his residency in ophthalmology and a fellowship in vitreoretinal diseases at Essen Germany and the Jules Stein Eye Institute, affiliated to the University of California School of Medicine, Los Angeles (UCLA) where he was offered a position as Assistant Professor. He was later recruited for chief of vitreoretinal surgery at the University of Illinois, Chicago, where he was a faculty member until 1987 when he moved to New Orleans to serve as the Chief of Vitreoretinal Surgery at Louisiana State University Eye Center and then at Tulane University. In 2006, after hurricane Katrina, he relocated to Arizona where he joined the faculty of the University of Arizona, Tucson, as Joint Professor of Optical Science & Engineering and later as a Professor of Ophthalmology & of Biomedical Sciences at the University of Arizona, College of Medicine Phoenix.[v]

The creation of LASIK

During his time at the University of Illinois, Dr. Peyman began to explore the possibilities of lasers as a means of treating eye conditions. In 1977, he began working with different types of lasers with limited success.  He published his findings in 1980 and waited for laser technology to catch up with his vision for a new type of surgery. In 1981, Samuel Blum, Rangaswamy Srinivasan, and James Wynne co-invented a process using a short pulse ultraviolet laser to etch tissue in minute increments and in a highly controlled fashion.  He believed this might be what he had been waiting for.

Dr. Peyman worked to improve his process and filed his patent in 1985 for the use of excimer lasers for correction of refractive errors by stromal ablation under a corneal flap and was granted a patent for his invention of LASIK eye surgery in 1989.[vi]

A patent is a milepost in the medical innovator’s journey, not the end. Dr. Peyman continued his work with the excimer lasers as he performed multiple research studies. Finally, the procedure was approved by the FDA in 1996 and the rest is history. Among his recent inventions is a new objective phoropter that measures the refractive error of both eyes, for prescription, in one second that was developed in collaboration with faculty at the University of Arizona, Tucson.

“Millions of people have benefited thanks to Dr. Gholam Peyman’s passion for innovation,” shared Joan Koerber-Walker, president & CEO of the Arizona Bioindustry Association (AZBio). “His work and collaborations have spanned continents and have made a global Impact.”

About the AZBio Awards:

Each year, the AZBio Awards celebrate Arizona’s leading Educators, Innovators and Companies during Arizona Bioscience Week.  In 2021, the AZBio Awards will be celebrated as a 1-hour television special – Celebrating Life & Science  – which will premiere on ABC15 at 4 PM on October 3, 2021.  For more information and additional air dates and times visit https://www.azbio.org/celebrating-life-science-2021

Each year Arizona Bioscience week is proclaimed at the Arizona Legislature and by the Governor.  Arizona Universities, business organizations and economic development agencies host a series of educational events, investor forums, and celebrations to engage the community in one of Arizona’s most important industries.  To access the full schedule of events, visit AZBio.org/AZBW2021.