The Arizona Bioindustry Association will honor Arizona Governor Douglas A. Ducey as the Arizona Bioscience Leader of the Year at the 2017 AZBio Awards.  Arizona life science and business leaders as well as guests from across the country will be on hand to applaud Governor Ducey for his leadership and support of Arizona’s growing life science industry and his commitment to growing the state’s knowledge economy. 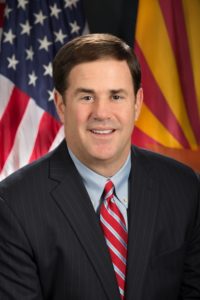 The Jon W. McGarity Arizona Bioscience Leader of the Year Award recognizes the person in Arizona who provided the most outstanding leadership that contributed significantly to development of the State’s bioindustry and/or recognition of the advancement of bioscience in Arizona.

“Leadership is the capacity to translate vision into reality.” These are the words of Warren Bennis, an American scholar, organizational consultant and author.  Bennis is widely regarded as a pioneer of the contemporary field of Leadership studies.

Bennis also wrote, “There are two ways of being creative. One can sing and dance or one can create an environment in which singers and dancers flourish.”

Arizona Governor Doug Ducey is an example of a leader who knows the importance of doing both. He is creating an environment where innovators and businesses can flourish by developing creative solutions to address challenges that leverage Arizona’s key resources.

In 2017, Governor Ducey signed a landmark $1 billion investment plan supporting Arizona higher education. The legislation enables approximately $1 billion in new investments to be directed toward research and development infrastructure at Arizona State University, the University of Arizona, and Northern Arizona University.  The Governor’s University Research Infrastructure Plan represented the fulfillment of one of his top priorities during Arizona’s 2017 legislative session.

On the day that the legislation was signed into law, Governor Ducey stated, “Today will be remembered as one that paved the way for decades of breakthroughs at our universities; one that opened the door for Arizona students to receive the highest-caliber university experience; and one that makes Arizona second to none in support of higher education.”

Governor Ducey believes that a great economy requires great public schools. During his first year in office, the Governor worked with the legislature to present a historic $3.5 billion funding plan for Arizona public schools to Arizona voters.  The people of Arizona voted “Yes” on Prop. 123, providing for more opportunities for our students and vital resources for our teachers and schools.

The following year, thanks to smart decisions made to balance the state’s budget, Arizona invested an additional $163 million into K-12 public schools, above and beyond inflation. Governor Ducey continues to work with lawmakers and education leaders on reforms that improve educational results and help kids reach their full potential.

Great ideas can grow into great companies.  To move forward faster, early stage companies often need the support of Angel Investors, who provide outside capital for business start-ups. In 2017, Governor Ducey approved raising the cap on Arizona’s successful Angel Investor Tax Credit program by an additional $10 million, which authorizes $2.5 million a year in tax credits for the next four years.

The Angel Investor program was approved in 2006 with a $20 million cap, which was met in July 2015. Over that period, the 125 small businesses that used the tax credit received approximately $62 million in certified investments. In 2012, the number of jobs at these companies averaged 334 annually and by 2015, the number had jumped to 1,378. In addition, the 94 companies known to be active when data for the most recent study was gathered had raised more than $420 million in seed capital, venture capital and other sources of financing. State and local tax revenue generated by the 94 small businesses was estimated to be $44 million and expected to grow as operations ramp up.

Led by its chairman, Governor Ducey, the Board of Directors of the Arizona Commerce Authority unites the state’s top officials with its globally recognized network of business leaders from across Arizona.  The ACA provides a full portfolio of resources that are key components of Arizona’s entrepreneurial tool kit.  Growing Arizona bioscience companies are benefiting from ACA-administered programs, including the Angel Investor Tax Credit and Arizona’s R&D Tax Credit, as well as from support services that help our companies win growth capital by applying for SBIR grants and access business loans to support their expansions.  In addition, the ACA’s Arizona Innovation Challenge competition awards $3 million in grants annually to help some of our most exciting young companies commercialize their technologies and scale their businesses.

Getting Government Out of the Way of Success

Prior to serving as an elected leader, Ducey was an active business leader and the CEO of Cold Stone Creamery. Running a business provides unique insights into the impact that over-burdensome regulations can have on a business’ ability to grow. “Regulation Rollback” is a strategic step in Governor Ducey’s ongoing work to make Arizona the best state in the nation to open a new business or to expand an existing one. The innovative new service allows individuals across the state to recommend ways to improve or eliminate outdated regulations directly to the Governor’s Office by submitting their ideas at AZGovernor.gov/RedTape.  Governor Ducey’s goal is to eliminate 500 regulations by the end of 2017.

As Governor, Ducey recognizes that leadership is not a “desk job.”  He actively engages with the people of Arizona to learn about what they are doing and hear their ideas. He also serves as our state’s ambassador, meeting with leaders from across the country and around the world to advocate for solutions that make life better for the people of Arizona. The Governor is tireless in his efforts to promote Arizona as the ideal place to live, work, play, recreate, retire, visit, build a business and get an education.

“Governor Ducey has led the way in developing plans to make strategic investments in our state that benefit our bioscience industry and all Arizonans,” shared Joan Koerber-Walker, president & CEO of AZBio. “More importantly, thanks to the Governor’s ability to communicate the vision and to bring people together to work toward a shared goal, this vision is becoming reality.”

A ceremony honoring Governor Ducey will take place at the AZBio Awards on October 11, 2017 at the Phoenix Convention Center.

The AZBio Awards ceremony celebrates Arizona’s leading educators, innovators and companies. Each year, AZBio honors bioindustry leaders from across the state of Arizona who are illustrative of the depth, breadth and expertise of its bioscience industry.

The AZBio Awards ceremony is held annually during Arizona Bioscience Week.  AZBW 2017 was proclaimed by the Arizona Senate earlier this year.  Multiple educational events focused on the value of life science innovation will take place from October 8, 2017 to October 14, 2017 including the BMES Annual Meeting in Phoenix.  The Biomedical Engineering Society (BMES) is the world’s leading society of professionals devoted to developing and using engineering and technology to advance human health and well-being. Attendees at BMES 2017 in Phoenix are expected to include nearly 4,000 professional scientists, engineers, researchers and students from academia and industry who are leaders in biomedical engineering.