BIO2013, the 20th BIO International Convention, is one for the history books now. Let’s take a look at what was the talk of the town in Chicago.
The 2013 BIO International Convention, the global event for biotechnology, wrapped up today at McCormick Place in Chicago, Ill. with a record number of partnering meetings and panel sessions on the latest science, policy issues and business opportunities and challenges facing the biotechnology industry. Hosted by the Biotechnology Industry Organization (BIO), the event drew 13,594 industry leaders from 47 states, the District of Columbia, Puerto Rico, U.S. Virgin Islands and 62 countries.

The BIO Exhibition featured more than 1,722 exhibitors and covered  180,000 square feet with 60 state and international pavilions. In its  second year, Exhibitor partnering hosted 5,400 meetings, a 25 percent  increase over 2012.

Arizona’s Pavilion was “Out of this world.”

Watch the video from NBC 5 Chicago.

To learn more about the UA Lunar Greenhouse, visit: http://ag.arizona.edu/lunargreenhouse/

Innovation will always be measured by the ultimate value it creates.  Making that happen is anchored in collaborations with patient advocacy groups, regulators and most of all… each other.

Arizona’s efforts at BIO2013 resulted meetings with Venture Funds, Strategic Investors and Partners, Biotech Hubs in the U.S. and around the world, and presentations by AZBio Members on the show floor, in the Buzz of Bio, and with local media.

Now the team will focus on following up on these meetings and getting to work on what we will do and who will represent Arizona at BIO2014 in San Diego – June 23- 26, 2014.

Connecting our community to the world takes a team.  Many thanks to all of our Arizona Team for their work on and at BIO 2013.

Special thanks go to the team at the Arizona Commerce Authority for once again organizing and hosting the Arizona Pavilion at BIO 2013 and to the team at the Controlled Environment Agriculture Center (CEAC) at the University of Arizona for bringing the Lunar Greenhouse to Chicago and helping to tell our story! 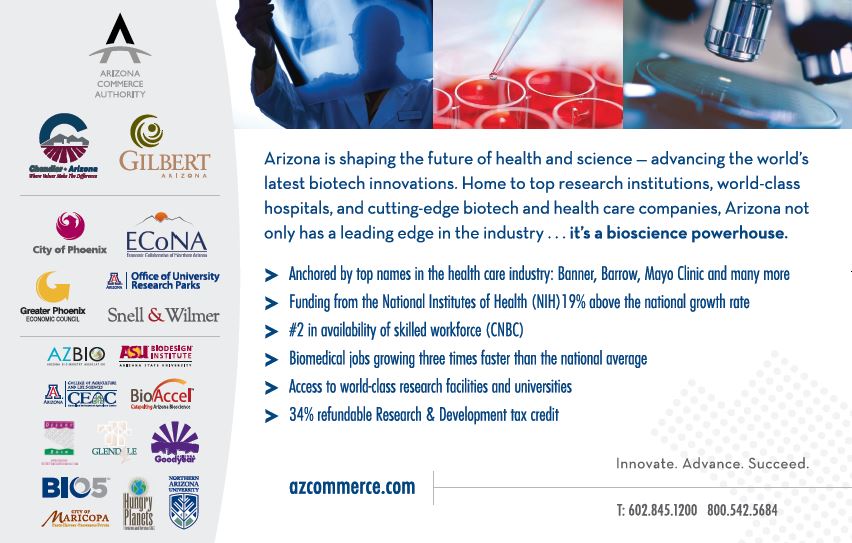