Jack B. Jewett, President & CEO of the Flinn Foundation, to be honored with the Jon W. McGarity Arizona Bioscience Leader of the Year Award by the Arizona BioIndustry Association. 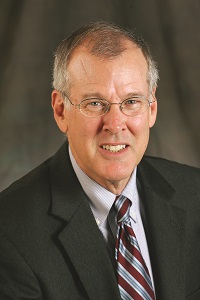 “Great leaders embrace possibilities and take the steps to make them reality. Jack B. Jewett has done more than just take steps,” shared Joan Koerber-Walker, President & CEO, of the Arizona Bioindustry Association. “Thanks to his leadership and the commitment of the Flinn Foundation, Arizona has a Bioscience Roadmap that charts our statewide bioscience strategies through 2025.”

A longtime Arizona leader in health care, education, and public policy, Mr. Jewett joined the Flinn Foundation in June 2009 as President & CEO. In this role, he is responsible for all grant programs and operations of the Flinn Foundation including Arizona’s Bioscience Roadmap, which is the longest running bioscience strategic initiative of its kind in the US. Under Jewett’s leadership, Flinn has renewed its commitment and released the next generation of the Roadmap extending out until 2025.

Mr. Jewett previously served in a variety of leadership roles within the private, public, and nonprofit sectors in Arizona for more than 40 years. He held senior public policy and government relations positions with Tucson Medical Center for 13 years and served as president of Territorial Newspapers, a family-owned publishing and printing company in Tucson. He served on the Arizona Board of Regents from 1998-2006, including a term as president; and five terms in the Arizona House of Representatives, from 1983-1992, the final two years as majority whip.

A University of Arizona graduate, Mr. Jewett currently serves on the board of trustees of the Tucson-based Thomas R. Brown Foundations, is a public member of the Arizona Judicial Council, and is a member of the Greater Phoenix Leadership Council. He served on the board of directors for the National Association of Governing Boards of Universities and Colleges from 2004-13, and received its Distinguished Service Award for outstanding trusteeship for his work on “Changing Directions,” an initiative of the Arizona Board of Regents.

The Flinn Foundation is a privately endowed, philanthropic grantmaking organization established in 1965 by Dr. Robert S. and Irene P. Flinn to improve the quality of life in Arizona to benefit future generations. Today, the Foundation supports the advancement of the biosciences in Arizona, as well as three other program areas to help build Arizona’s knowledge-driven economy.

A ceremony honoring Jack B. Jewett will take place at the AZBio Awards Sept. 17 at the Phoenix Convention Center. The AZBio Awards ceremony celebrates Arizona’s leading educators, innovators and companies. Each year, AZBio honors bioindustry leaders from across the state of Arizona who are illustrative of the depth, breadth and expertise of our bioscience industry.

For registration and more information, go to azbioawards.com.

AZBio – The Arizona Bioindustry Association – is comprised of member organizations in business, research, government, and other professions involved in the biosciences.  AZBio supports the members of the Arizona bioscience community by providing access to the key resources, connections, and information that support their ability to Connect, Collaborate, Innovate and Succeed thus supporting the growth of a thriving economic ecosystem for Arizona’s Bioscience Industry.

The AZBio Awards are just one of the exciting opportunities to connect with Arizona’s fastest growing industry sector during Arizona Bioscience Week. Other activities include company showcases and student discovery presentations that are free and open to the public as well as the White Hat Life Science Investor Conference which will be held September 18, 2014.

Arizona’s Life Science Industry is our state’s fastest growing technology sector and investments in Arizona companies are paying off as demonstrated by Insys Therapeutics (Chandler) which was the top performing initial public offering of 2013 and Ulthera (Mesa) which is being acquired this year for $600 million. AZBio in partnership with the Life Science Associations of Southern California, Arizona, Colorado, Utah, Montana, Nevada, and Texas, is hosting accredited investors as guests for both the AZBio Awards September 17, 2014 and the White Hat Life Science Investor Conference on September 18.

In addition to great company presentations in the areas of Medical Device, Diagnostics, Therapeutics and Health IT, White Hat includes 3 general sessions (breakfast, lunch and closing) featuring panel discussions on the investment environment from the perspective of Angels, Strategic Investors and VC’s  with panelists including:  James Healy of Soffinova Ventures, Risa Stack of GE Ventures, David Douglass of Delphi Ventures, Jonathan Root of US Venture Partners, Randal Schulhauser of Medtronic, Evelia Johnston of the Michael J. Fox Foundation, Harry George of Solstice Capital, and more.

Details and registration information can be found at www.WhiteHatInvestors.com. Registration is complimentary for all investors and members of the media.