Regents’ professor William Grabe, a member of the NAU faculty since 1984, will assume Huenneke’s position.

“Dr. Huenneke and Dr. Grabe are both skilled individuals well suited for their new positions,” Haeger said. “Having such talent already on campus helps the university maintain its momentum as we face numerous critical issues and opportunities.”

The assignments for both administrators begin July 1, with Huenneke working immediately with Provost Liz Grobsmith to ensure a smooth transition. Grobsmith announced her decision to step down as provost last month.

Haeger has been meeting with groups across campus, including the Faculty Senate, President’s Cabinet and the Academic Chairs Council, to discuss the process of selecting a provost. In those meetings, Haeger told the groups that NAU was fortunate to have such strong candidates already on campus. 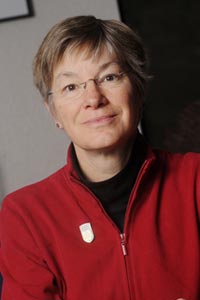 Huenneke is eager to start her new role, saying, “I am excited about the chance to work more directly with faculty and with the academic programs again. In all the changes that the university is experiencing, their efforts and their support for our students will be crucial.”

As vice president, Huenneke has overseen a campus shift from heavy reliance on state agency funding for research to more effective competition for federal funding, which has increased more than 33 percent in three years. She also has helped improve NAU’s recovery of indirect cost dollars, allowing the university to reinvest in research capacity.

Huenneke explained that NAU’s strategic plan for increasing research on campus speaks to more than the Arizona Board of Regents’ goal of doubling research expenditures by 2020. “It’s focused on strengthening the quality of the education we offer and serving our region and communities,” she said. “There’s a great deal more to do, and the challenges are huge—but the importance of this effort is huge, too.” 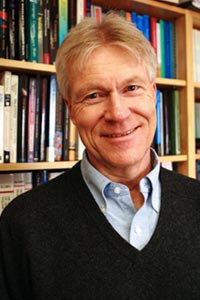 Grabe was executive director of Academic Chair’s Council from 2004-06 and served as interim vice provost for Research and dean of Graduate Studies from 2006-07.

He has been a Senior Fulbright Lecturer in both China and Brazil. He has done extensive research, publication and presentations in the fields of teaching, reading, testing and researching in English as a foreign language. He also has been a Department of State academic specialist lecturing and consulting in 16 countries, and he has been a consultant with Educational Testing Service, Princeton, N.J., on various projects for the past 24 years.

Prior to beginning his academic career, Grabe was a Peace Corps volunteer in Morocco teaching English as a foreign language at all levels in Moroccan secondary schools.

The letter announcing the promotions of Dr. Huenneke and Dr. Grabe by NAU President John Haeger appears below:

I am happy to announce that Laura Huenneke has accepted my offer to become Northern Arizona University’s next provost and vice president for Academic Affairs.

With several qualified candidates already on campus, it was a  difficult decision. Laura’s academic and administrative background as vice president for Research, former dean and a skilled scientist make her an exceptional candidate for this role. I am confident in Laura’s ability to  lead the university’s academic departments forward, meeting the significant challenges and opportunities that lie ahead.

To assume the role of provost, Laura will be leaving her position as vice president for Research, a crucial position for this university’s future. I have determined the most qualified and able replacement for Laura is Regents’ professor William Grabe, keeping in mind the understanding of the job and the university, the demonstrated skills and  ability to perform the job and the amount of respect the community holds for him.

Bill has produced an extensive compilation of published   scholarly work and served as interim vice provost for Research several years ago. During that time, he worked effectively with both internal and external   leadership groups and strengthened the department. I have great confidence that Bill will serve as an exceptional leader for the well-functioning department Laura is leaving.

I appreciate the support of the many groups on campus I have spoken with regarding this comparatively fast method of choosing an internal   candidate for the role of provost. Instead of focusing our resources on conducting a national search, we can now maintain momentum in critical academic initiatives—University College, integrating technology into the  classroom, the math emporium and other student success undertakings—that will   move the university forward.

Finally, I would like to thank Liz Grobsmith, who has been an integral part of NAU’s success for the past 10 years, and we look forward to working with her in future capacities.

Liz is remaining with NAU, taking on new roles in international education and sustainability, among other areas. I will be visiting with the Cabinet, Faculty Senate and the Council of Chairs to talk   more about the critical roles involved in Liz Grobsmith’s new portfolio.

As always, I thank you for your continued support.