Dr. Leslie Boyer, founding director of the VIPER (Venom Immunochemistry, Pharmacology and Emergency Response) Institute at the University of Arizona  College of Medicine to receive the 2013 Arizona Bioscience Researcher of the Year Award.

The Arizona Bioindustry Association (AZBio) today announced that Leslie Boyer, M.D.,  founding director of the VIPER (Venom Immunochemistry, Pharmacology and Emergency Response) Institute at the University of Arizona  College of Medicine has been named the 2013 Arizona Bioscience Researcher of the Year in recognition of her work as the Principal Investigator for the multicenter scorpion antivenom clinical studies program conducted throughout Arizona.  Dr. Boyer will be honored in Phoenix at the 2013 AZBio Awards on October 10, 2013. 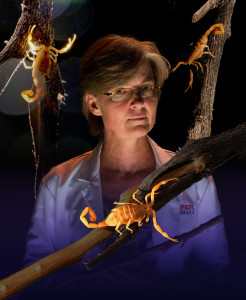 Arizona Bioscience Researcher of the Year,
Leslie Boyer, MD, founding director of
the VIPER Institute
at the University of Arizona.

The Arizona Bioscience Researcher of the Year Award honors the life science researcher in Arizona who has made the most significant contribution to the advancement of knowledge and the understanding of biological processes, as measured by publications and/or professional acknowledgement of their work in either an academic or commercial setting.

In 2013, Dr. Leslie Boyer was been named one of 30 heroes of rare diseases by the Food and Drug Administration’s Office of Orphan Products Development.  Her work includes a clinical studies program conducted throughout Arizona with protocols for placebo-controlled, double-blind trials, open-label studies, historical control studies, and the statewide STING project. She has coordinated phase 2 and phase 3 multicenter clinical trials of pit viper antivenom, developed the Antivenom Index, and participated in the establishment of the Pan-American Lymphotoxinology Taskforce.

Boyer, who is a member of the UA’s BIO5 Institute, has focused her scientific career on venomous bites and stings, which are often unrecognized public health issues. She began by developing public education programs that offer poison and toxin emergency treatment advice. In 2004 and 2005, with an FDA Orphan Product grant, she led a team that conducted clinical studies leading to the marketing approval of the first scorpion antivenom – representing one of more than 40 products developed through orphan grant-sponsored research.

The May-June edition of International Educator features an article on Dr. Boyer and a team of  the US and Mexican academics collaborate and overcome challenges. Such collaboration between the VIPER Institute and UNAM (Universidad National Autonoma de México) have led to the approval of a drug against scorpion stings, called Anascorp®.

“There are many benefits to living in Arizona’s desert environment, but we also share our home with native creatures whose sting or bite can range from painful to even life threatening” shared AZBio president and CEO Joan Koerber-Walker. “Thanks to the work of Dr. Boyer and her team of life science innovators, when the viper strikes or the scorpion stings, our healthcare community and caregivers around the world have a solution.”

In addition honoring Dr. Boyer, the AZBio Awards will celebrate the achievements of: