Linda Hunt, President and CEO Dignity Health in Arizona to receive the 2013 Jon W. McGarity Arizona Bioscience Leader of the Year Award on October 10, 2013 at the AZBio Awards in Phoenix. 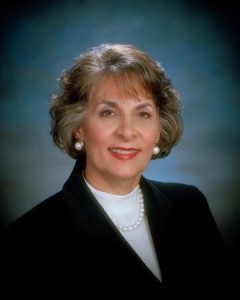 Linda Hunt
President and CEO of Dignity Health in Arizona

The Arizona Bioindustry Association (AZBio) today announced that Linda Hunt, President and CEO, Dignity Health in Arizona has been named the 2013 Jon W. McGarity Arizona Bioscience Leader of the Year Award in recognition of her work and dedication to building Arizona’s bioindustry.  The award also underscores her commitment to fostering collaborative innovation, and her championing efforts to ensure all Arizonans have access to care.  Hunt will be honored in Phoenix at the 2013 AZBio Awards on October 10, 2013.

The Jon W. McGarity Arizona Bioscience Leader of the Year Award honors the person in Arizona who provided the most outstanding leadership that contributed significantly to development of the State’s bioindustry and/or recognition of the advancement of bioscience in Arizona.

Recognizing that collaboration builds a stronger community, Linda Hunt has taken a leadership role to advance healthcare and the biosciences for the people of Arizona. Hunt has worked diligently with legislators, business leaders, educators, scientists and community organizations in order to identify, formulate, and support policies that will give Arizonans better healthcare and raise the bar of knowledge.

Hunt  has served on several state and national commissions to shape the future of healthcare and medical education, including: the Council of Teaching Hospitals and Health Systems Administrative Board of the American Association of Medical Colleges; the Arizona Commission on Medical Education and Research; the Arizona Health-e Connection Steering Committee, and the Arizona Bioscience Roadmap Steering Committee.  She is also involved in several community organizations, serving on the Greater Phoenix Leadership’s Bioscience Task Force and co-chairing the Healthcare Leadership Council at the GPEC.

Prior to her current position at Dignity Health  Hunt was  CEO of  St. Joseph’s and led the hospital to  become a world-renowned academic medical institution, bringing prestige and recognition to the region. She expanded academic and bioscience research including collaboration with TGen, and partnerships with ASU and other research institutions.

Barrow Neurological Institute of St. Joseph’s is internationally recognized as a leader in neurological research and patient care. Barrow treats patients with a wide range of neurological conditions and performs more brain surgeries than any facility in the nation..  Barrow centers of excellence include The Gregory W. Fulton ALS and Neuromuscular Disease Center, The Barrow Center for Alzheimer’s Disease and Cognitive Disorders, The Muhammad Ali Parkinson Center  and Movement Disorders Clinic, The Epilepsy Center, and The Barrow Neurological Institute at Phoenix Children’s Hospital just to name a few. 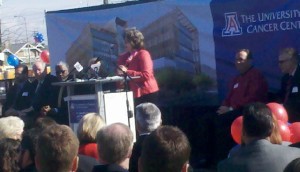 Hunt was instrumental in expanding St. Joseph’s School of Nursing, in collaboration with Grand Canyon University, as well as developing the regional campus of the Creighton University School of Medicine.

She also negotiated the agreement with The University of Arizona Cancer Center to operate its Phoenix campus.  The new Center is expected to open in 2015.

In addition, Hunt has been a stalwart champion of the Restoring Arizona coalition, and worked diligently to achieve the Medicaid Restoration Plan developed by Governor Brewer.

“Great leaders embrace possibilities and take the steps to make them reality” shared AZBio president and CEO Joan Koerber-Walker. “Linda Hunt has worked day-by-day to build collaborative teams, develop actionable plans, and execute them.  The results of her efforts can be seen across the state and will benefit Arizonan’s for many years to come.”

In addition honoring Linda Hunt, the AZBio Awards will celebrate the achievements of: