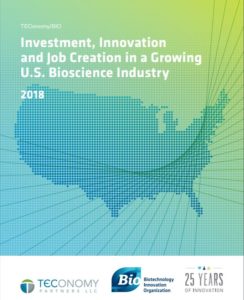 The report, Investment, Innovation and Job Creation in a Growing U.S. Bioscience Industry 2018, finds U.S. bioscience firms directly employ 1.74 million people, a figure that includes more than 273,000 high-paying jobs created since 2001. The average annual wage for a U.S. bioscience worker reached $98,961 in 2016. These earnings are more than $45,000 greater, on average, than the overall U.S. private sector wage. The report further shows that since 2014, the bioscience industry has grown by 4.4 percent with four of its five major subsectors contributing to this overall job gain.

For the first time, the biennial report includes a full assessment of the economic impact of the bioscience industry and finds its total economic impact on the U.S. economy, as measured by overall output, totaled $2 trillion in 2016. This impact is generated by the direct output of the bioscience industry combined with the indirect (supply chain) and induced (employee spending) impacts. The industry and its associated economic output support 8 million jobs throughout the entire U.S. economy through both indirect and induced effects.

“This report highlights the enormous economic impact delivered by our industry. This strong performance is due to the vital and wide-ranging collaborations between industry partners, universities, and policymakers that provides a business climate that supports the development of innovative bioscience products and high paying jobs,” said Jim Greenwood, President and CEO of the Biotechnology Innovation Organization.”

The report also takes the pulse of the broader U.S. innovation ecosystem for bioscience companies and finds it advancing with positive results. The U.S. is experiencing strong gains in bioscience venture capital funding, growth in patents, a recent ramp-up in bioscience-related university R&D expenditures and increasing research funding from the National Institutes of Health (NIH).

“The bioscience industry is vital to the U.S. not only as an innovation engine that is improving lives, but also as a major economic driver that is consistently generating high-quality jobs and significant economic output across the nation,” said Ryan Helwig, Principal and Project Director with TEConomy Partners.

The state-by-state industry assessment is the eighth in a biennial series, developed in partnership by TEConomy and BIO, presenting data on national, state, and metropolitan area bioscience industry employment and recent trends.

Additional highlights from the industry economic analysis include:

Highlights from the analysis of the innovation ecosystem for the bioscience industry include:

The TEConomy/BIO report includes individual profiles for all 50 states, the District of Columbia and Puerto Rico, and can be found on the BIO website at bio.org/jobs2018.

For a detailed analysis on how Arizona compares to its population peer group (states with a population of 5- 7 million), please contact AZBio.

About BIO
BIO is the world’s largest trade association representing biotechnology companies, academic institutions, state biotechnology centers and related organizations across the United States and in more than 30 other nations. BIO members are involved in the research and development of innovative healthcare, agricultural, industrial and environmental biotechnology products. BIO also produces the BIO International Convention, the world’s largest gathering of the biotechnology industry, along with industry-leading investor and partnering meetings held around the world. BIOtechNOW is BIO’s blog chronicling “innovations transforming our world” and the BIO Newsletter is the organization’s bi-weekly email newsletter. Subscribe to the BIO Newsletter.

About TEConomy
TEConomy Partners, LLC is a global leader in research, analysis, and strategy for innovation-based economic development. Today we’re helping nations, states, regions, universities, and industries blueprint their future and translate knowledge into prosperity. The Principals of TEConomy Partners include the authors of the prior Battelle/BIO State Bioscience Development reports, published since 2004. For more information, please visit http://www.teconomypartners.com.