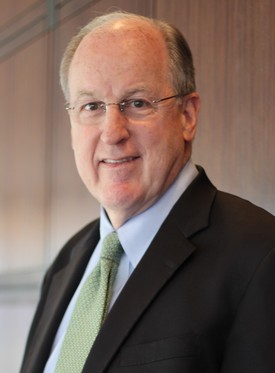 A scientist and leader who furthers research and development in the public sector and an aviator who has soared to new heights in the U.S. Navy will be honored during Northern Arizona University’s fall commencement ceremonies Friday, Dec. 14, in the Walkup Skydome in Flagstaff.
It’s not often that a scientific career reaches beyond one’s own discipline. But William Harris has helped to transform scientific infrastructures around the world: a commitment to science and education is the cornerstone of his career. (Nature)

William C. Harris, president and chief executive officer of Science Foundation Arizona, will be presented with an honorary doctoral degree during the 9 a.m. commencement ceremony at Northern Arizona University. Harris has participated in the president’s speaker series at NAU and serves on the Four Corners Sustainable Futures Initiative Steering Committee that works with tribal governments and communities to create sustainable economic development activities in the region.

Harris has devoted his career to working with agencies in Arizona and around the world to develop research and educational enterprises that benefit the public. He recently co-authored a book titled Adrift: Charting Our Course Back to a Great Nation, which discusses education, innovation and revitalizing the American economy.

Prior to joining SFAz, Dr. William C. Harris was in Ireland serving as director general of Science Foundation Ireland (SFI), a new Irish agency that helped facilitate tremendous growth in Ireland’s R&D sector during Harris’ tenure. Immediately prior to going to Ireland, Dr. Harris was vice president of research and professor of chemistry and biochemistry at the University of South Carolina (USC). There, he oversaw research activities throughout the USC system, several interdisciplinary centers and institutes, the USC Research Foundation and sponsored research programs. Dr. Harris served at the U.S. National Science Foundation (NSF) from 1978 to 1996, including as the director for mathematical and physical sciences (1991-1996). He was responsible for federal grants appropriation of $750 million.  He also established 25 Science and Technology Centers to support investigative, interdisciplinary research by multi-university consortia.  Earlier in his career, he catalyzed the Research Experience for Undergraduates program in the chemistry division and it became an NSF-wide activity.

From 1997-2000, Dr. Harris served as Biosphere 2’s president and executive director, when the research site was managed by Columbia University. During his tenure, Dr. Harris worked to establish and strengthen new educational and research programming at Biosphere 2 and build up relationships with other Arizona institutions.

In 2005, Dr. Harris was elected a member of the Irish Royal Academy, and received the Wiley Lifetime Achievement Award from California Polytechnic State University.  He has authored more than 50 research papers and review articles in spectroscopy and is a fellow of the American Association for the Advancement of Science.

Dr. Harris earned his undergraduate degree at the College of William and Mary, and received his Ph.D. in chemistry from the University of South Carolina.

For information on the NAU commencement ceremonies, visit this link.