Astronauts face many challenges to their health, due to the exceptional conditions of spaceflight. Among these are a variety of infectious microbes that can attack their suppressed immune systems. 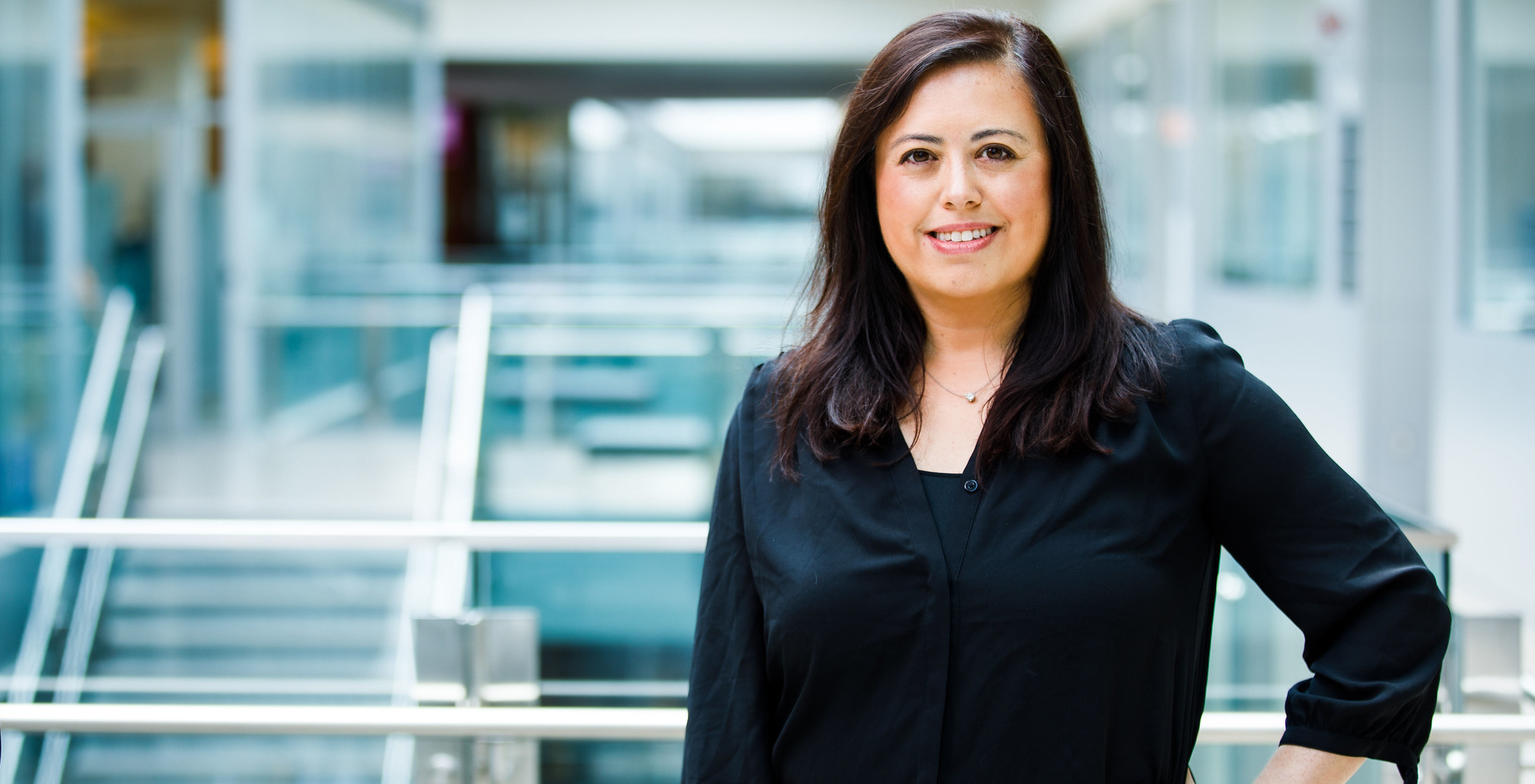 Jennifer Barrila, lead author of the new study, is a researcher in the Biodesign Center for Fundamental and Applied Microbiomics. (Image Courtesy of ASU Biodesign Institute)

Now, in the first study of its kind, Cheryl Nickerson, lead author Jennifer Barrila and their colleagues describe the infection of human cells by the intestinal pathogen Salmonella Typhimurium during spaceflight. They show how the microgravity environment of spaceflight changes the molecular profile of human intestinal cells and how these expression patterns are further changed in response to infection. In another first, the researchers were also able to detect molecular changes in the bacterial pathogen while inside the infected host cells.

The results offer fresh insights into the infection process and may lead to novel methods for combatting invasive pathogens during spaceflight and under less exotic conditions here on earth.

The results of their efforts appear in the current issue of the Nature Publishing Group journal npj Microgravity.

In the study, human intestinal epithelial cells were cultured aboard Space Shuttle mission STS-131, where a subset of the cultures were either infected with Salmonella or remained as uninfected controls.

Nickerson and Barrila, researchers in the Biodesign Center for Fundamental and Applied Microbiomics, along with their colleagues, have been using spaceflight as a unique experimental tool to study how changes in physical forces, like those associated with the microgravity environment, can alter the responses of both the host and pathogen during infection. Nickerson is also a professor in the School of Life Sciences at ASU.

In an earlier series of pioneering spaceflight and ground-based spaceflight analogue studies, Nickerson’s team demonstrated that the spaceflight environment can intensify the disease-causing properties or virulence of pathogenic organisms like Salmonella in ways that were not observed when the same organism was cultured under conventional conditions in the laboratory.

The studies provided clues as to the underlying mechanisms of the heightened virulence and how it might be tamed or outwitted.  However, these studies were done when only the Salmonella were grown in spaceflight and the infections were done when the bacteria were returned to Earth.

“We appreciate the opportunity that NASA provided our team to study the entire infection process in spaceflight, which is providing new insight into the mechanobiology of infectious disease that can be used to protect astronaut health and mitigate infectious disease risks,” Nickerson says of the new study. “This becomes increasingly important as we transition to longer human exploration missions that are further away from our planet.”

Salmonella strains known to infect humans continue to ravage society, as they have since antiquity, causing around 1.35 million foodborne infections, 26,500 hospitalizations, and 420 deaths in the United States every year, according to the Centers for Disease Control. The pathogen enters the human body through the ingestion of contaminated food and water, where it attaches and invades into intestinal tissue. The infection process is a dynamic dance between host and microbe, its rhythm dictated by the biological and physical cues present in the tissue’s environment.

Despite decades of intensive research, scientists still have much to learn about the subtleties of pathogenic infection of human cells. Invasive bacteria like Salmonella have evolved sophisticated countermeasures to human defenses, allowing them to flourish under hostile conditions in the human stomach and intestine to stealthily evade the immune system, making them highly effective agents of disease.

The issue is of particular medical concern for astronauts during spaceflight missions. Their immune systems and gastrointestinal function are altered by the rigors of space travel, while the effects of low gravity and other variables of the spaceflight environment can intensify the disease-causing properties of hitchhiking microbes, like Salmonella. This combination of factors poses unique risks for space travelers working hundreds of miles above the earth—far removed from hospitals and appropriate medical care.

As technology advances, it is expected that space travel will become more frequent—for space exploration, life sciences research, and even as a leisure activity (for those who can afford it). Further, extended missions with human crews are on the horizon for NASA and perhaps space-voyaging companies like SpaceX, including trips to the Moon and Mars. A failure to keep bacterial infections at bay could have dire consequences.

In the current study, human intestinal epithelial cells, the prime target for invasive Salmonella bacteria, were infected with Salmonella during spaceflight. The researchers were keen to examine how the spaceflight setting affected the transcription of human and bacterial DNA into RNA, as well as the expression of the resulting suite of human proteins produced from the RNA code, products of a process known as translation.

The research involved the close examination of transcriptional profiles of both the pathogenic Salmonella and the human cells they attack, as well as the protein expression profiles of the human cells to gauge the effects of the spaceflight environment on the host-pathogen dynamic.

To accomplish this, researchers used a revolutionary method known as dual RNA-Seq, which applied deep sequencing technology to enable their evaluation of host and pathogen behavior under microgravity during the infection process and permitted a comparison with the team’s previous experiments conducted aboard the Space Shuttle.

The host and pathogen data recovered from spaceflight experiments were compared with those obtained when cells were grown on earth in identical hardware and culture conditions (e.g., media, temperature).

Earlier studies by Nickerson and her colleagues demonstrated that ground-based spaceflight analogue cultures of Salmonella exhibited global changes in their transcriptional and proteomic (protein) expression, heightened virulence, and improved stress resistance—findings similar to those produced during their experiments on STS-115 and STS-123 Space Shuttle missions.

In contrast, the new study explores for the first time, a co-culture of human cells and pathogen during spaceflight, providing a unique window into the infection process. The experiment, called STL-IMMUNE, was part of the Space Tissue Loss payload carried aboard STS-131, one of the last four missions of the Space Shuttle prior to its retirement.

The human intestinal epithelial cells were launched into space (or maintained in a laboratory at the Kennedy Space Center for ground controls) in three-dimensional (3-D) tissue culture systems called hollow fiber bioreactors. The hollow fiber bioreactors each contained hundreds of tiny, porous straw-like fibers coated with collagen upon which the intestinal cells attached and grew. These bioreactors were maintained in the Cell Culture Module, an automated hardware system which pumped warm, oxygenated cell culture media through the tiny fibers to keep the cells healthy and growing until they were ready for infection with Salmonella.

Once in orbit, astronauts aboard STS-131 activated the hardware. Eleven days later, S. Typhimurium cells were automatically injected into a subset of the hollow fiber bioreactors, where they encountered their target—a layer of human epithelial cells.

The RNA-Seq and proteomic profiles showed significant differences between uninfected intestinal epithelial cultures in space vs those on earth. These changes involved major proteins important for cell structure as well as genes important for maintaining the intestinal epithelial barrier, cell differentiation, proliferation, wound healing and cancer.  Based on their profiles, uninfected cells exposed to spaceflight may display a reduced capacity for proliferation, relative to ground control cultures.

Human intestinal epithelial cells act as critical sentinels of innate immune function. The results of the experiment showed that spaceflight can cause global changes to the transcriptome and proteome of human epithelial cells, both infected and uninfected.

During spaceflight, 27 RNA transcripts were uniquely altered in intestinal cells in response to infection, once again establishing the unique influence of the spaceflight environment on the host-pathogen interaction. The researchers also observed 35 transcripts which were commonly altered in both space-based and ground-based cells, with 28 genes regulated in the same direction. These findings confirmed that at least a subset of the infection biosignatures that are known to occur on Earth also occur during spaceflight.  Compared with uninfected controls, infected cells in both environments displayed gene regulation associated with inflammation, a signature effect of Salmonella infection.

Bacterial transcripts were also simultaneously detected within the infected host cells and indicated upregulation of genes associated with pathogenesis, including antibiotic resistance and stress responses.

The findings help pave the way for improved efforts to safeguard astronaut health, perhaps through the use of nutritional supplements or probiotic microbes. Ongoing studies of this kind, to be performed aboard the International Space Station and other space habitats, should further illuminate the many mysteries associated with pathogenic infection and the broad range of human illnesses for which they are responsible.

“Before we began this study, we had extensive data showing that spaceflight completely reprogrammed Salmonella at every level to become a better pathogen,” Barrila says. “Separately, we knew that spaceflight also impacted several important structural and functional features of human cells that Salmonella normally exploits during infections on earth. However, there was no data showing what would happen when both cell types met in the microgravity environment during infection. Our study indicates that there are some pretty big changes in the molecular landscape of the intestinal epithelium in response to spaceflight, and this global landscape appears to be further altered during infection with Salmonella.”