NuvOx Pharma, a development stage pharmaceutical company based in Tucson, Arizona, beat out 63 other early stage contenders to take the winning spot at Venture Madness 2016. 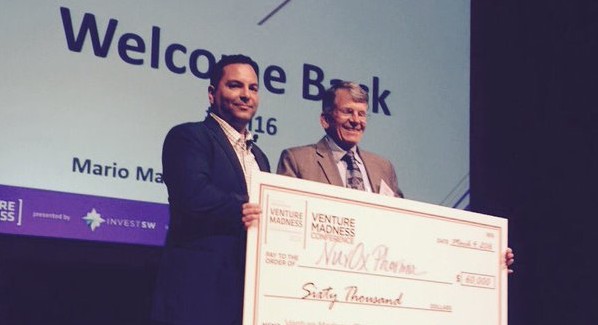 Venture Madness, presented by Invest Southwest in partnership with the Arizona Commerce Authority, pits 64 of the most promising startups against one another in a bracket-style, head-to-head competition. Since 1992, Invest Southwest has helped startups raise more than $300 million in capital while being the premier organization that connects investors with the best and brightest ventures in the region. For more than 20 years, it has served the entrepreneurial community primarily through the annual Invest Southwest Capital Conference. That all changed in 2013 when Invest Southwest introduced its signature event, Venture Madness, in partnership with Arizona Commerce Authority.

NuvOx Pharma won  the Venture Madness 2016 Champion title.  The runner up was eVisit, with RightBio Metrics and The Medical Memory rounding out the top four.

Mrtnz Ventures and Grayhawk Ventures each added $100,000 in investments to the existing $100,000 in prize money, bringing the total funding allocated among the top four companies to $300,000.

NuvOx Pharma is developing a platform of drugs that reduce tissue hypoxia in order to treat several life-threatening medical conditions. The first life-threatening condition to be targeted is cancer, where most solid tumors are hypoxic which reduces their response to radiation therapy. NuvOx’s first drug will reduce tumor hypoxia, thereby allowing radiation therapy to be more effective at increasing cancer survival and reducing recurrence. Later drugs from NuvOx’s proprietary platform will target other diseases where hypoxia plays a role, including sickle cell crisis, stroke, and heart attack. NuvOx has an experienced management team that has collectively worked on the FDA approval of 11 different drugs, strong intellectual property, excellent safety data, and pre-clinical efficacy data. NuvOx is will use its winnings to continue its Phase 1b clinical trial in oncology. View their winning application.