The transformative gift establishes endowed positions and scholarships and expands the college’s History of Pharmacy Museum. The college will be renamed in recognition of R. Ken Coit’s support. 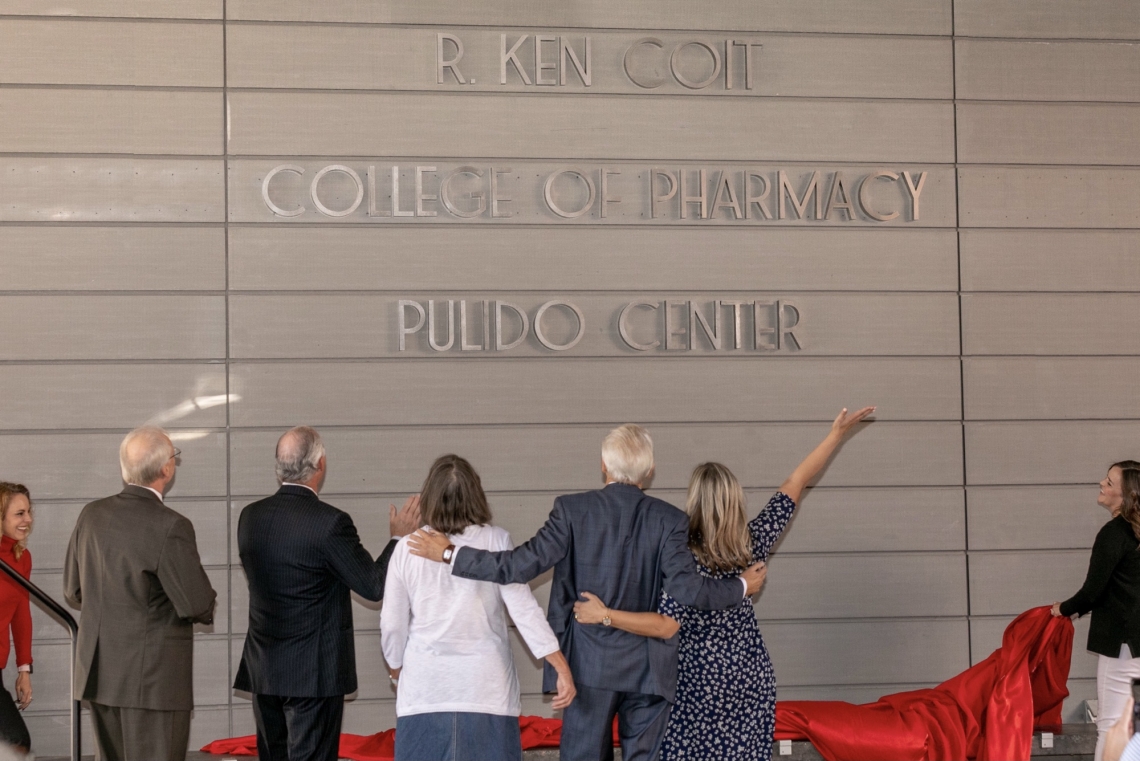 Coit made the announcement with Robert C. Robbins, president of the University of Arizona, John-Paul Roczniak, president and CEO of the UArizona Foundation, and Rick G. Schnellmann, dean of the College of Pharmacy. The announcement was timed to coincide with Coit’s visit to campus for Homecoming.

“It is my goal to see the University of Arizona College of Pharmacy take its place among the top three programs in the nation,” Coit said. “With this gift, the college can recruit the best and brightest students and faculty, who will go on to change the face of health care around the world.”

Coit’s commitment establishes six endowed chairs in drug discovery, neurodegenerative diseases and toxicology, as well as an endowment to support scholarships for the college’s doctor of pharmacy and doctoral programs. The gift will also be used to fund strategic investments in the form of research equipment and facility upgrades, and a portion has already been used for an expanded wing of the college’s museum, which will now be known as the Coit Museum of Pharmacy and Health Sciences. The grand opening is scheduled for spring 2022.

The college is one of the premier pharmacy schools in the nation and recently was ranked No. 7 by the American Associations of the College of Pharmacy’s list of colleges with the most National Institutes of Health grant funding.

Coit, who is a member of the college’s national advisory board, has been a steadfast supporter of the college for nearly 50 years. He and his family previously founded the R. Ken Coit Endowed Chair to reward excellence in teaching, and he committed $2 million to the Skaggs Challenge in 2016. The challenge helped the college achieve its fundraising goal for the expansion and renovation of the Skaggs Pharmaceutical Sciences Center, completed in February 2020. Over the past 49 years and including this new gift, Coit has donated and pledged more than $68 million to support pharmacy education at the university.

“Ken has been an incredible partner to the University of Arizona, and I am truly appreciative of his transformative generosity,” Robbins said. “The College of Pharmacy has been at the forefront of drug discovery research and pharmaceutical education since its inception more than 70 years ago. Through Ken’s inspirational gift, the college will have the resources to continue leading the way on these fronts.”

“Ken’s remarkable commitment builds upon a legacy of support that is empowering the College of Pharmacy to achieve remarkable results in improving human health and potential in Arizona, across the country and around the world,” Dake said.

Coit has the kind of pioneering vision that perfectly encapsulates the Wildcat spirit, Roczniak added.

“His generous support has advanced not only the College of Pharmacy, but the entire University of Arizona in its capacity to serve others both near and far,” Roczniak said.

Coit graduated from the College of Pharmacy with a bachelor’s degree in pharmacy in 1967. He practiced pharmacy for three years before beginning a career in investing and financial planning. Though he didn’t spend a lot of time working in the pharmacy industry, he credits his professors with instilling in him the values that made him successful.

“I may not be a pharmacist now, but I learned a lot in pharmacy school that’s still important to me,” he said. “My professors demonstrated high ethical standards and integrity and taught me how to take care of patients. They really instilled that we were there to take care of others. I kept and transferred that value when I changed to investing.”

“Ken’s leadership and philanthropic investments ensure our college will continue to grow, recruit and support the best students and faculty – attracting top people from around the world to make advances in pharmacy practice and pharmaceutical sciences,” Schnellmann said.