In accord with this week’s 7th annual World Rare Disease Day, Arizonans and patients from throughout the nation and around the globe are benefiting from rare disease research conducted by the non-profit Translational Genomics Research Institute (TGen).

TGen’s use of genomic sequencing is helping discover the genetic basis for uncommon and often unidentified medical conditions, transforming patients and their families by providing hope and answers.

For example, TGen’s Center for Rare Childhood Disorders is on the frontline in the battle to provide diagnosis for children whose medical conditions are often just a collection of symptoms; whose conditions are so rare they often don’t even have a name.

One of the children helped by TGen’s Center is 3-year-old Emilia Crowell of Tempe, who has suffered since birth with lung disorders and an inability to gain weight and store fat. TGen sequencing located a gene, CAV-1, that might be at the heart of her disorder.

“My hope, long term, is that TGen will help diagnose even more children with rare disorders,” said her mother, Mary Crowell, adding that simply knowing what might be the source of Emilia’s disorders has opened the doors to medical specialists. “I’m very hopeful about the prospects of what TGen can offer other families in the future.”

TGen also is active in many other rare disease research areas, especially in cases of rare cancers, such as adrenocortical carcinoma (ACC), a cancer of the adrenal gland, or in chronic diseases such as cystic fibrosis, which affects the lungs, and is being studied by TGen’s Pathogen Genomics Division.

“I’m so thankful for TGen and their clinical trials, and especially for the hope that it offers future patients,” said pancreatic cancer patient Pam Ryan of Phoenix, a participant in an international clinical trial supervised by TGen for a drug, Abraxane. As a result of TGen’s work, the FDA recently approved Abraxane as a frontline treatment for patients with advanced pancreatic cancer. 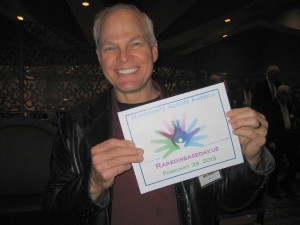 “Like going to the moon, we at TGen choose to tackle the difficult challenges presented by rare diseases, not because they are easy, but because they are hard; because those patients need us to commit the best of our energies and skills,” said Dr. Michael Berens, TGen Deputy Director for Research Resources. “It is a challenge we are unwilling to postpone, and — like going to the moon — it is a race we intend to win.”

World Rare Disease Day, Feb. 28, is intended to raise awareness for rare diseases and improve access to treatments and medical representation for individuals with rare and genetic diseases and their families.

A disease or disorder is defined as rare in the U.S. if it affects fewer than 200,000 Americans. Collectively, they affect 1 in 10 in the U.S., or about 30 million people, and 300 million people globally. Nearly half are children. There are more than 7,000 distinct rare diseases, with nearly 80 percent caused by faulty genes.

TGen uses the latest technology to find out everything possible about a patient’s genetics. Our researchers use that information to provide patients, their families and their doctors with the best medical options for their unique illnesses.

It is now possible at TGen to sort through the billions of molecules that make up each patient’s genome. By identifying the exact differences in each patient’s cells, TGen’s precision medicine enables doctors to prescribe new drugs that target those cells, and avoid harmful side effects.

Precision medicine, also known as personalized medicine, is made possible through machines with ever-more-precise camera optics and ever-faster, data-rich computers. TGen’s sequencing machines are able — in a matter of hours — to spell out, in order, the billions of chemical letters that make an individual’s DNA, and other elements of their genome.

TGen’s precision medicine enables doctors to direct the most appropriate medicine or medical technology to specific patients based on the unique characteristics of those patients, providing them with the best possible outcomes.