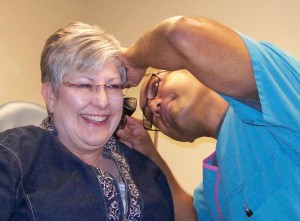 TUCSON, Ariz. – LoriAnn Harnish, 53, has suffered from hearing loss since having a high fever when she was 5 years old. The hearing impairment went undetected until the second grade, when her teacher spoke in a pitch she could not hear.

Tests determined Harnish had 65 percent hearing loss in both ears. She used hearing aids, but never could hear well when using them, so learned to lip read.

Today the Scottsdale resident is hearing more clearly than she has in decades after becoming the first person in the Southwest to receive a totally implantable hearing device at The University of Arizona Medical Center.

Abraham Jacob, MD, associate professor, UA Department of Surgery Division of Otolaryngology, and ddirector of the UA Ear Institute, is the only surgeon in the Southwest – and one of only about 15 surgeons in the nation – approved to implant the Esteem®, a surgically implanted device designed to improve hearing.

Esteem® uses a person’s own ear as a microphone, picking up sounds through the ear canal and using the body’s natural anatomy to reduce the background noise, distortion and acoustic feedback that people experience with conventional hearing aids, Dr. Jacob said.

“We are using the eardrum and hearing bones to sense sound and then drive amplified sound to the hearing bones directly,” Dr. Jacob said.  “Compared to conventional hearing aids, it is a fundamentally different way to hear.”

Unlike cochlear implants, which are placed in the inner ear of profoundly deaf individuals, the Esteem® is implanted in the middle ear of patients with moderate to moderately severe hearing loss, he said.

Esteem can be left on 24 hours a day, and the volume can be adjusted. A battery change is required every five to nine years, depending on the amount of use.

“The Esteem addresses several sources of dissatisfaction commonly associated with hearing aids – ear canal discomfort, infection, feedback-related squealing, inability to use hearing aids while in bed or in the shower and visibility,” Dr. Jacob said.  “Studies show that about half of people with hearing aids are dissatisfied with them; Esteem® users tend to be far happier with their device.”

Over the years, Harnish suffered from irritation and infection caused by the hearing aids. “I always thought someday in my lifetime I would have an implant or something high-tech and I would be the Bionic Woman,” said Harnish, who is a corporate meeting planner for US Foods.

After spending $10,000 on hearing aids that did not work well, Harnish investigated other options and discovered the Esteem. She met Dr. Jacob, who established the first and only Esteem® center in Arizona.

Harnish’s surgery was performed on Sept. 27 on her left ear. During the procedure, which takes about four hours, an S-shaped incision is made behind the ear, mostly in the hairline or hidden by the outer ear.  An opening is made in the bone to house the battery/processor and to insert the sensor and driver technologies.

Harnish spent one night in the hospital to make sure that she recovered well from her general anesthetic. After waiting the recommended eight weeks for her ear to heal, the implant was activated in November.

“When the day came that they turned it on, it was amazing what I could hear that I hadn’t heard,” Harnish said.

She recently went to a movie and caught all of the dialogue. As she and her husband, Ron, were strolling to the car, she heard the far-off sound of a waterfall. “Without surgery I never would have heard that.’’

With a growing segment of older Americans, Dr. Jacob said the Esteem® could improve the lives of many with hearing impairment. Insurance companies in Arizona do not currently cover Esteem®, but he believes that with sufficient pressure from patients, hopefully they will.

“I would urge everyone over 65 to lobby their congressman that hearing is critically important to an active lifestyle and hearing loss impacts quality of life in a dramatic way,” he said. “As technology advances and the aging population grows, it is important that we have more advanced solutions for people.”

Harnish plans to have surgery on her other ear within the year. “Dr. Jacob is the most competent surgeon I could ever dream to have,” Harnish said. “My care was incredible – the best I have ever received.’’

“I needed to do something for myself to make sure I had the ability to communicate the best I can. This was the answer for me.”