Chandler, Arizona —-The Arizona Bioindustry Association will honor Stephen Albert Johnston, of Arizona State University as the Arizona Bioscience Researcher of the Year at the 2016 AZBio Awards on September 21, 2016. The award is given annually to the life science researcher in Arizona who has made the most significant contribution to the advancement of knowledge and the understanding of biological processes. 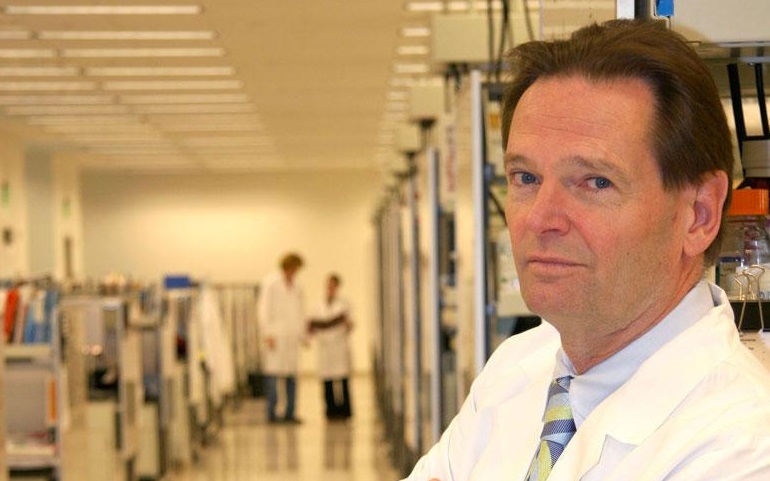 Arizona life science and business leaders as well as guests from across the country will be on hand to applaud Johnston for pursuing answers to the question “If we can’t cure cancer, why not just prevent it?”

That’s the “crazy” question that scientist-inventor Stephen Albert Johnston has been asking – and exploring – for nearly a decade. While others have asked why Johnston would pursue such an audacious path. Johnston’s answer is, “Why not?” His determination to discover a universal, prophylactic vaccine for cancer has found him today in the throes of Phase Two dog trials, during which he and his team will enroll some 700 subjects and test what could ultimately become an inexpensive vaccine that can be administered to everyone in the world to prevent most cancer.

Those who know Johnston understand that he’s impatient with incremental goals. His vision for the cancer vaccine comes from his commitment to creating diagnostics, tools and treatments that are available and accessible to all nations. He cites a World Health Organization fact that 70 percent of cancer deaths occur in the developing world.

Already, Johnston has made tracks. On his journey to hit an oncological “home run,” he has identified 21 antigens that are common to all breast tumors. These are the elements that will be used to create the universal vaccine. If the vaccine works, the immune system would target these antigens and destroy the very first malignant cell before it multiplies and produces a tumor.

His Biodesign Center for Innovations in Medicine at Arizona State University has the big goal of developing “innovative solutions to fundamental problems in biomedicine.” In the true spirit of Biodesign, he brings together a group of interdisciplinary scientists who first identify a problem, analyze the basis of the related issues, and then come up with an inventive solution.

One inventive solution already at play is the development of immunosignatures, a diagnostic based on hundreds of thousands of peptides synthesized directly on silicon wafers. To make this happen, he adopted a process similar to Intel’s photolithography, but instead of making integrated circuits, they use batch peptide chemistry. The spinout company he created with Neal Woodbury, HealthTell, has sites at the Chandler Innovations Incubator in Arizona and in San Ramon, California. HealthTell was named “one of the five Bay Area companies to watch” in 2015.  HealthTell recently raised $40 million in its capital campaign.

The beauty of the innovation is that there is not a specific antibody for a specific disease, but rather, a whole picture or “signature” of disease. Johnston’s team has been able to identify Valley Fever and outperform the best diagnostic test on the market. They can distinguish between 15 diseases simultaneously, including Alzheimer’s disease, and have tested the technology  on more than 1,500 individuals with 95 percent accuracy. With funding from Alliance Beverage Distributing in Phoenix and The Dorothy Foundation, Johnston is now testing the diagnostic against melanoma.

Johnston is also the founder of Eliance (now Macrogenics). In 2014, he launched Calviri with a mission to eradicate cancer. “We need to fund and complete the dog efficacy trial and in parallel, optimize the vaccine for human testing,” he said.

He co-invented/innovated pathogen-derived resistance, organelle transformation, the gene gun, genetic immunization, TEV protease system, expression library immunization, linear expression elements, synbodies and immunosignaturing. Johnston has published over 150 journal articles, has more than 20 patents, and has attracted more than $85 million in grant support including large programs from DARPA, NIAID and NHLBI. Johnston is a professor at ASU’s College of Liberal Arts and Sciences’ School of Life Sciences.

For his commitment to pushing the frontiers of science for the betterment of people in Arizona and around the world, Stephen Johnston is the 2016 Arizona Bioscience Researcher of the Year.