The international quarterly publication, which covers topics of innovation worldwide, cites the SynCardia Total Artificial Heart because it saves patients dying from end-stage biventricular heart failure when they cannot get matching donor heart transplants in time. The SynCardia Heart provides the needed blood flow that helps patients recover and be in better condition for their matching donor heart transplants. 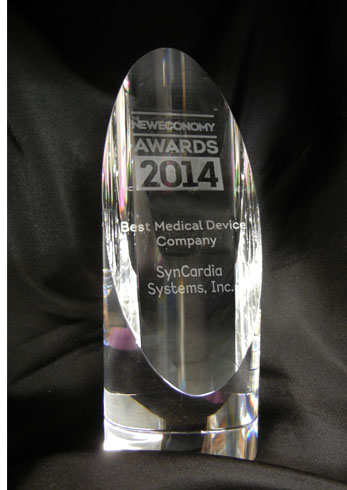 The New Economy, a London-based quarterly publication that covers topics of innovation worldwide, announced the award to SynCardia in its recently released autumn 2014 issue, which also is available online. A listing of all winners by category will appear in its winter edition.

Find out why The New Economy names SynCardia Systems, Inc., the “Best Medical Device Company” for 2014.

The annual awards “identify and celebrate companies that are achieving success and breaking new ground across technology, energy, business and strategy,” according to the magazine.

According to the U.S. Department of Health & Human Services, about 4,000 people wait for a donor heart transplant on any given day, while the supply of approximately 2,300 donor hearts annually has been flat in the U.S. for over 20 years.

More than 1,350 SynCardia Total Artificial Hearts have provided more than 400 years of support for patients around the world who instead would have died because they could not get a donor heart in time.

Similar to a heart transplant, the SynCardia Total Artificial Heart is the only approved device that eliminates the source of end-stage biventricular heart failure in which the heart’s two ventricles can no longer pump enough blood for the patient to survive.

The company, based in Tucson, Arizona, also manufactures the Freedom® portable driver, which powers the SynCardia Heart. At 13.5 pounds, or about 6 kilos, it is light enough to be worn in a backpack, carried in a shoulder bag or wheeled on a cart.

The wearable Freedom portable driver allows clinically stable SynCardia Total Artificial Heart patients to be discharged from the hospital to wait for their matching donor hearts at home and in their communities. This eliminates most in-hospital costs for this portion of the patient’s care.

The Freedom portable driver provides nearly unlimited mobility, which allows patients to exercise, socialize, eat home-prepared meals and sleep in their own beds, all of which help the patient gain strength for their donor heart transplant.

About the SynCardia temporary Total Artificial Heart
SynCardia Systems, Inc. in Tucson, Arizona is the privately-held owner and manufacturer of the world’s first and only FDA, Health Canada and CE approved Total Artificial Heart for use as a bridge to transplant for people suffering from end-stage biventricular heart failure in which both ventricles can no longer pump enough blood for a person to survive.

More than 1,350 implants of the SynCardia Total Artificial Heart accounts for over 400 patient years of life on the device. Since January 2011 more than 400 SynCardia Hearts have been implanted.

SynCardia Systems also manufactures the Freedom® portable driver, which powers the SynCardia Heart while allowing clinically stable patients to leave the hospital to live at home and in their communities. The wearable Freedom driver has been used by more than 190 patients, accounting for over 110 years of support