In 2013, “biosimilars” were a hot topic at the Arizona Legislature. In the end, the bill to define the classes of biosimilars in Arizona statute  along with the the process for substitution did not move forward to the floor as key stateholders and legislators continued to research and discuss the issue.

It is expected that the first biosimilars will be approved by the FDA in 2015 and that the states that have yet to up date their pharmacy acts (including Arizona) will be opening up these discussions again.

As shared by BioCentury, the U.S. biosimilars pathway is finally getting some traffic. FDA is reviewing at least two biosimilars applications, and more are expected to be filed soon.

The video below from BioCentury This Week television provides an update on FDA’s thinking about interchangeability, naming and other questions surrounding this class of drugs with Dr. Janet Woodcock, director of the FDA’s Center for Drug Evaluation and Research.

Question:  What are “Biosimilars”

As part of the Affordable Care Act, the Federal Government created two new definitions of drugs “Biosimilars” and “Interchangeable Biosimilars”.

The term biosimilar refers to products that are marketed after expiration of patents, which are claimed to have similar properties to existing biologic products. Due to the complexity of biologics (they are manufactured using living organisms as compared to traditional pharmaceuticals which are chemical compounds that are combined) a biologic product can only be made that is similar, but not identical as generic drugs are. 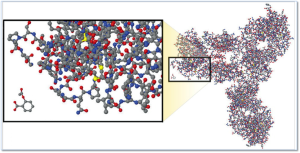 The image at right illustrates the comparative complexity of the most popular small molecule drug (aspirin) which is the small moleucar structure in the lower left of the image and a monoclonal antibody (large molecule /biologic product).

While the Federal government may review, approve and designate the class of these products, the states will each determine the process for substitution through each state’s Pharmacy Act.

Arizona will need to update its Pharmacy Act to define classes of biosimilars and establish the process for substitution.  Pharmacists in Arizona will not be authorized to substitute these products (and save both patients and payers money) without the prescriber changing the prescription until we update our Pharmacy Act.

Question: What will an update to Arizona’s Pharmacy Act will need to address

An update to the Pharmacy Act would need to  establish the process of how these interchangeable biosimilars may be automatically substituted by pharmacists AFTER the FDA has approved them as interchangeable biosimilars and the products are available on the market.  If we do not have a process in Arizona, there can be no substitution here without it being approved by the prescribing medical professional.  Substitutions will still be possible, however only after either the pharmacist or the patient goes back to the prescriber for a new prescription. This extra step will result in more work (and costs) for the prescribersand the pharmacists as well as  delays for the patient or the patient’s caregiver.

These changes would  NOT …

Key aspects of the Arizona biosimilars bill will likely  include:

Key Definitions:  Since these are not terms that all of us use every day, the FDA provided a simple FAQ for consumers to clarify the definitions. The FDA will also maintain a reference for healthcare providers in the Purple Book which provides lists of licensed biological products with reference product exclusivity and biosimilarity or interchangeability Evaluations.  The FDA maintains a similar reference for drugs called the Orange Book which is used extensively today.

Question:  When will these products be available and why do we need this bill now?

While a few biosimilars are under review by the FDA today, many more are coming in the future.  Acting now establishes the process to allow substitution as soon as they are available.  It also provides a guide to the many software companies that are supplying Electronic Health Record and ePrescription programs to the health care delivery community so that they can have adequate time to update their software instead of scrambling with updates at the last minute.