“SynCardia Systems, a developer and manufacturer of temporary implantable artificial hearts, filed on Monday with the SEC to raise up to $40 million in an initial public offering.”  (Source) 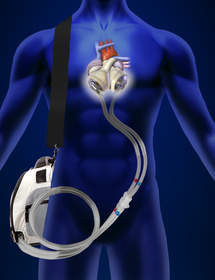 Based in Tucson, Arizona, SynCardia Systems, Inc. is the manufacturer of the world’s first and only FDA, Health Canada and CE approved Total Artificial Heart for use as a bridge to transplant for people suffering from end-stage biventricular heart failure in which both ventricles can no longer pump enough blood for a person to survive.

More than 1,440 implants of the SynCardia Total Artificial Heart account for over 465 patient years of life on the device. Since January 2010 more than 600 SynCardia Hearts have been implanted.

SynCardia is conducting an FDA-approved clinical study on the effectiveness of the SynCardia Total Artificial Heart and the Freedom® portable driver for use as destination therapy, also known as permanent use, in the United States.

The 70cc SynCardia Total Artificial Heart, when used for destination therapy, is an investigational device, limited by United States law to investigational use.  (Source)

According to Renaissance Capital:

“The Tucson, AZ-based company, which was founded in 2001 and booked $18 million in sales for the 12 months ended June 30, 2015, plans to list on the Nasdaq under the symbol TAHT. Roth Capital is the sole bookrunner on the deal. No pricing terms were disclosed. “

Note: Donald G. Isaacs, an employee of SynCardia, Systems, Inc., serves as vice chairman of the AZBio Board of Directors.   The company has been a member of the Arizona Bioindustry Association since 2011 and was honored as the Arizona Bioscience Company of the Year in 2011.   Only resources publically available online were used in creating this article.