Next steps: Drug development and clinical trials that could benefit patients

PHOENIX, Ariz. — Nov. 8, 2013 — A cellular pathway interaction known as TWEAK-Fn14, often associated with repair of acute injuries, also is a viable target for drug therapy that could prevent the spread of cancer, especially brain cancer, according to a study led by the Translational Genomics Research Institute (TGen).
TWEAK is a cytokine, or soluble protein, that controls many cellular activities and acts by binding to a cell surface receptor known as Fn14. TWEAK binding to Fn14 triggers a wide range of cellular activities, including blood clotting, inflammation, cell proliferation, cell migration, and the creation of new blood vessels.

While many of these activities are beneficial —  for example, helping to heal a cut — excessive TWEAK-Fn14 activation also has been linked to tissue damage and degradation, including autoimmune diseases, as well as the survival, migration and invasion of cancer cells. 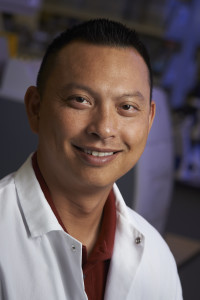 “Our results show that the TWEAK-Fn14 interaction is a viable drug target, and they provide the foundation for further exploration of this system in researching invasive cancers,” said Dr. Nhan Tran, an Associate Professor in TGen’s Cancer and Cell Biology Division.

“Because of its unique qualities and association with acute injuries, this drug-like molecule not only could benefit cancer patients, but also might be applied to patients with autoimmunity, heart disease like atherosclerosis, and rheumatoid arthritis,” said Dr. Tran, the study’s senior author.

The study — Structural Basis and Targeting of the Interaction between Fibroblast Growth Factor-Inducible 14 and Tumor Necrosis Factor-like Weak Inducer of Apoptosis — publishes in today’s (Nov. 8) issue of The Journal of Biological Chemistry.

Overexpression of TWEAK-Fn14 has been linked to several types of cancer, including breast, pancreatic, esophageal, lung, liver and — most important in this study — glioblastoma.

By using protein-protein docking models, 129 small molecules were selected for screening, which identified four that inhibited the binding of TWEAK to Fn14.

“These results represent a significant step towards proving that the TWEAK-Fn14 interaction may be key to treating invasive glioblastoma brain tumors,” said Dr. Michael Berens, TGen Deputy Director for Research Resources and Director of TGen’s Cancer and Cell Biology Division.

“The next step will be to move this compound forward for drug development and eventual testing in clinical trials, where it might bring immediate benefit for patients,” said Dr. Berens, a co-author of the study.

The study was funded by The Ben and Catherine Ivy Foundation and the National Cancer Institute (NCI).