Dr. Daniel D. Von Hoff, Distinguished Professor and Physician-In-Chief for the Translational Genomics Research Institute (TGen), an affiliate of City of Hope, has been selected to receive the 2019 Distinguished Public Service Award from the American Association for Cancer Research (AACR). The AACR is the world’s first and largest professional organization dedicated to advancing cancer research and its mission to prevent and cure cancer. 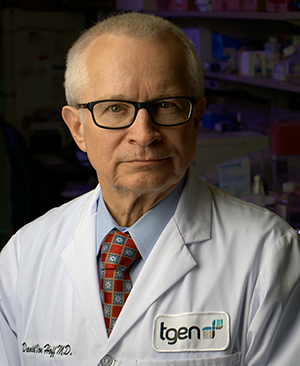 Dr. Margaret Foti, Chief Executive Officer of the AACR, said in a letter to Dr. Von Hoff that the award is “in recognition of your extraordinary clinical research career.” Specifically, Dr. Foti cited Dr. Von Hoff’s contributions in creating the Methods in Clinical Cancer Research Workshop, which she described as “the world’s premier workshop dedicated to educating individuals on effective clinical trial designs and therapeutic interventions for the treatment of cancer.”

For the past 23 summers, Dr. Von Hoff has led the weeklong workshop, drawing on the expertise of nearly 40 of the nation’s leading oncologists, patient advocates and biostatisticians to provide intensive cancer care instruction for newly minted physicians. The workshop is sponsored by the AACR and the American Society of Clinical Oncology (ASCO), the world’s two leading cancer professional organizations, and by the National Cancer Institute though a competitive grant.

“We put each applicant through a rigorous process, selecting doctors who have a deep interest in making clinical advances. Participants say it’s one of the most effective courses in preparation for cancer patient care,” said Dr. Von Hoff, who also is Professor of Medicine at Mayo Clinic Scottsdale, Chief Scientific Officer for US Oncology Research, and Medical Director of Research at McKesson Specialty Health. He holds the Virginia G. Piper Distinguished Chair for Innovative Cancer Research at HonorHealth Clinical Research Institute.

Dr. Von Hoff also is a past director of the Arizona Cancer Center, a past board member and President of the AACR, a Fellow of the AACR Academy, and recipient of the distinguished 1997 AACR Richard and Hinda Rosenthal Memorial Award. In addition, he is a past board member of ASCO and winner of its prestigious 2010 David A. Karnofsky Memorial Award for outstanding contributions to the improvement of patient care.

Dr. Von Hoff’s clinical career is legendary. He has led or participated in more than 350 first-in-human investigational agent clinical trials. For the past 17 years, his work at TGen has brought new treatments into clinical practice that have increased the survival of patients with pancreas cancer and has ushered in groundbreaking advances in other malignancies.

Dr. Von Hoff is also a Senior Consultant and Clinical Investigator at City of Hope, a world-renowned independent research and treatment center for cancer, diabetes and other life-threatening diseases. He has led teams of TGen and City of Hope investigators to explore new medical breakthroughs in pancreatic cancer, childhood leukemia, stem cells, 3-D imaging and more. Through this work, he has expanded options for cancer patients, most of whom are desperate for new and more effective treatments.

“Dr. Von Hoff’s reputation of providing compassionate care to patients precedes him,” said Dr. Michael Caligiuri, past-President of the AACR and the Deana and Steve Campbell Physician-in-Chief Distinguished Chair and President of City of Hope National Medical Center. “It’s wonderful that someone who is internationally recognized for advancing so many cancer therapeutics has made it his mission to mentor the next generation of oncology physician-scientists.”

Through the Methods in Clinical Cancer Research Workshop, Dr. Von Hoff teaches the essentials of effective clinical trial design for therapeutic interventions in the treatment of all cancers. Working around the clock, each summer’s class is divided into 12 groups. Each student must write a protocol for a new cancer clinical trial of sufficient quality to pass an Institutional Review Board, a critical step in receiving FDA approval to pursue such a study. Clinical trials are carefully controlled research studies that evaluate promising new drugs, while giving patients access to the latest in potentially lifesaving therapeutics.

The AACR and ASCO have helped design the Methods workshop to increase the reliability and effectiveness of clinical trials.

Dr. Foti noted that the success of the Methods workshop has prompted similar programs in Africa, Asia, Australia and Europe, resulting in the training of an additional 2,000 clinical investigators around the world.

“Collectively, these accomplishments have been made possible thanks to your unwavering vision and commitment to the workshop,” Dr. Foti said in her letter to Dr. Von Hoff. “Your ability to constantly innovate is unparalleled and has allowed the workshop to have a tremendous impact on the number of lives saved as a result of the training of thousands of physician-scientists.”

Dr. Von Hoff will receive the award during the 2019 AACR Annual Meeting — March 29-April 3 in Atlanta — where he will present a featured lecture at 7 a.m. April 1 at the Georgia World Congress Center.

Dr. Jeffrey Trent, TGen President and Research Director, said of the award, “I can think of no one more deserving of this recognition than Dr. Von Hoff, whose unparalleled practice of precision medicine and its resulting benefit in patient care is a biomedical beacon for us all to follow.”

Dr. Von Hoff is the co-editor of a forthcoming book, “Precision Medicine in Cancer Therapy,” to be published by Springer Nature, Scientific Publishing Services Ltd.

About TGen, an affiliate of City of Hope
Translational Genomics Research Institute (TGen) is a Phoenix, Arizona-based non-profit organization dedicated to conducting groundbreaking research with life changing results. TGen is affiliated with City of Hope, a world-renowned independent research and cancer and diabetes treatment center: www.cityofhope.org. This precision medicine affiliation enables both institutes to complement each other in research and patient care, with City of Hope providing a significant clinical setting to advance scientific discoveries made by TGen. TGen is focused on helping patients with neurological disorders, cancer, diabetes, and infectious diseases, through cutting edge translational research (the process of rapidly moving research towards patient benefit). TGen physicians and scientists work to unravel the genetic components of both common and rare complex diseases in adults and children. Working with collaborators in the scientific and medical communities literally worldwide, TGen makes a substantial contribution to help our patients through efficiency and effectiveness of the translational process. For more information, visit: www.tgen.org.