AACR establishes award in honor of Dr. Von Hoff for his groundbreaking accomplishments as a dedicated and inspirational educator and for his sustained scientific innovation 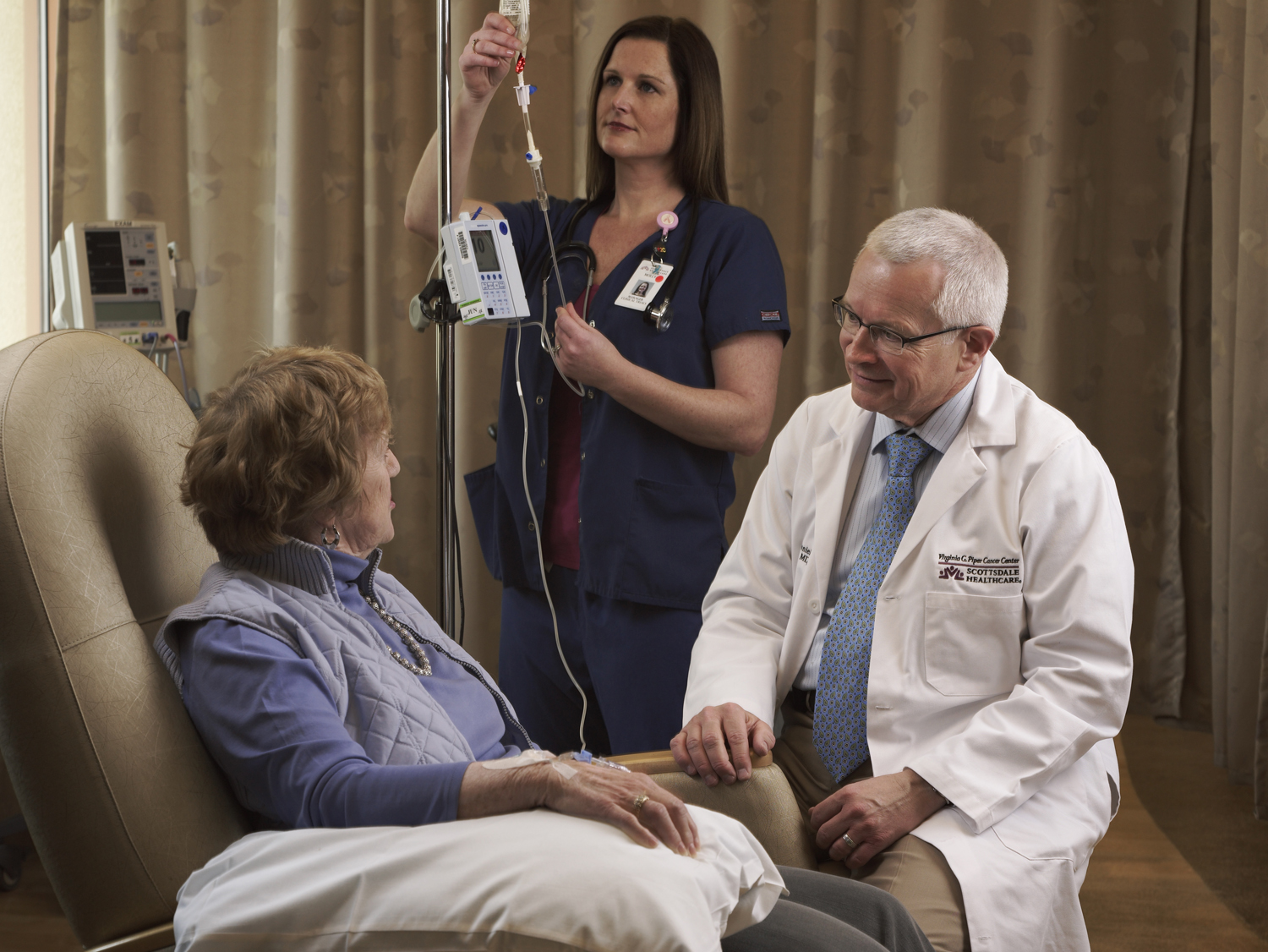 Dr. Von Hoff, M.D., F.A.C.P., F.A.S.C.O., F.A.A.C.R, is being recognized for his groundbreaking accomplishments as a dedicated and inspirational educator, for his sustained scientific innovation that has accelerated advances in cancer science and medicine, and for his extraordinary contributions to the education and training of thousands of clinical cancer investigators.

His personal tutelage and professional guidance of young clinical fellows and junior clinical faculty for more than two decades have contributed not only to their educational background and training, but also to their ability to apply the principles learned to improve the care of countless cancer patients around the world. Future awards will be presented to deserving individuals who have made significant contributions to the education and training of cancer scientists and physicians at any career level and in any area of cancer research.

Dr. Von Hoff is also a Distinguished Professor in the Department of Medical Oncology and Therapeutic Research at City of Hope, a world-renowned independent research and treatment center for cancer, diabetes and other life-threatening diseases; the Virginia G. Piper Distinguished Chair for Innovative Cancer Research at HonorHealth Clinical Research Institute; Chief Scientific Officer for US Oncology Research; and Professor of Medicine at the University of Arizona and Mayo Clinic in Arizona.

An internationally renowned cancer researcher, Dr. Von Hoff has contributed to the discovery and development of many approved anticancer therapeutics that are used routinely in the treatment of numerous types of cancer. These therapeutics include, but are not limited to, dexrazoxane, docetaxel, fludarabine, gemcitabine, irinotecan, mitoxantrone, nab-paclitaxel, paclitaxel, topotecan, vismodegib, pexidartinib, and nanoliposomal irinotecan. Notably, his work involving gemcitabine and nab-paclitaxel combination therapy in pancreatic cancer patients was one of the first to demonstrate improved response rates, progression-free survival, and overall survival in patients with metastatic pancreatic cancer.

In addition to his scientific leadership, Dr. Von Hoff has long been a champion and mentor of early-career and early-stage investigators and is dedicated to supporting the professional development of the cancer research workforce. Importantly, Dr. Von Hoff is revered for conceptualizing the AACR/ASCO Methods in Clinical Cancer Research Workshop and for establishing and guiding the development of the course. As such, the course has become the premier workshop dedicated to educating clinical fellows and junior faculty clinical researchers in oncology specialties in the principles of effective clinical trial designs and therapeutic interventions for the treatment of cancer. Since its inception in 1996, the workshop has trained more than 2,400 investigators to execute optimally designed clinical research studies. The concept of this workshop has also been globally adapted to similar workshops in Europe as well as Australia, which has drawn attendance from individuals from India, New Zealand, Pakistan, and many other countries within Southeast Asia. Collectively, more than 4,400 young clinical investigators have been trained through these workshops.

“The AACR is thrilled to establish an award to honor Dr. Von Hoff’s exceptional contributions to the training of cancer investigators,” said Margaret Foti, Ph.D., M.D., chief executive officer of the AACR. “Because of Dr. Von Hoff’s foresight and efforts, thousands of early-career cancer investigators around the world have received training in the fundamentals of clinical cancer research and clinical trial design. These individuals have since saved countless lives. The AACR is deeply grateful to Dr. Von Hoff for his unwavering commitment to ensuring the success of the AACR/ASCO Methods in Clinical Cancer Research Workshop for the benefit of cancer patients worldwide, and we are delighted that he will be celebrated as the inaugural recipient of this prestigious new award created in his name.”

“I am humbled and deeply grateful for this very special honor,” said Dr. Von Hoff. “I share this honor with my incredible colleagues and teachers, who have devoted many thousands of hours to training and mentoring the next generation of clinical investigators. Our goal together has always been to make sure patients would only be asked to participate in well-designed clinical trials, which would answer important questions impacting patient care.”

Dr. Jeffrey Trent, TGen President and Research Director, said: “I can think of no one more deserving of AACR’s recognition than Dr. Von Hoff. His tremendous achievements over the decades are a direct result of his unrelenting pursuit of new therapeutics guided by a drive to provide the absolute best care possible for our patients.”

Dr. Steven Rosen, provost and chief scientific officer at City of Hope, said: “City of Hope’s alliance with TGen brings together brilliant scientists like Dr. Von Hoff. Together, we are training the next generation of scientists how to conduct well-designed clinical trials so that the personalized, precise treatments of tomorrow can be offered to patients who need them today.”

The award is accompanied by an honorarium and a featured award lecture to be held in conjunction with the AACR Annual Meeting 2021.

Dr. Von Hoff has been recognized by the AACR for his many cancer research accomplishments, earning an AACR Distinguished Public Service Award (2019) and the AACR Richard and Hinda Rosenthal Memorial Award (1997). His other distinguished awards include: the Bernard Fisher Lectureship from the University of Pittsburgh (2018); Merrill J. Egorin Outstanding Mentor of the Year Award (2018); Gold Medal for Excellence in Clinical Medicine from the Columbia University College of Physicians and Surgeons (2017); Giants of Cancer Care from OncLive (2016); Researcher of the Year from AZ Business Magazine (2015); Lori Groetken Memorial Lecture and Award from Washington University (2012); Scripps Genomic Medicine Award – Pioneering Implementation of Discoveries (2011); David A. Karnofsky Memorial Award, American Society of Clinical Oncology (2010); SU2C Pancreatic Dream Team: Cutting off the Fuel Supply, A New Approach to the Treatment of Pancreatic Cancer (2009-2017); SU2C-Cancer Research UK-Lustgarten Foundation Pancreatic Cancer Dream Team: Reprogramming of Transcriptional Circuitry to Control Pancreatic Cancer (2016-2020); William F. McWhorter Community Service Leader of the Year Award (2008); and Weinberg Award from the Dana-Farber Cancer Institute (2003). Dr. Von Hoff served on the National Cancer Advisory Board from 2004-2011. He was elected as a Fellow of the American Association for the Advancement of Science (1992), and Fellow of the American College of Physicians (1980). He was also the director of the Arizona Cancer Center at the University of Arizona (1999-2003); and professor and director of the Institute for Drug Development at the University of Texas Health Science Center at San Antonio (1989-1999).

Dr. Von Hoff has published 741 papers, 143 book chapters, and over 1,186 abstracts during his prestigious career.

About the American Association for Cancer Research
Founded in 1907, the American Association for Cancer Research (AACR) is the world’s first and largest professional organization dedicated to advancing cancer research and its mission to prevent and cure cancer. AACR membership includes 47,000 laboratory, translational, and clinical researchers; population scientists; other health care professionals; and patient advocates residing in 127 countries. The AACR marshals the full spectrum of expertise of the cancer community to accelerate progress in the prevention, diagnosis, and treatment of cancer by annually convening more than 30 conferences and educational workshops—the largest of which is the AACR Annual Meeting, with more than 100,000 attendees for the 2020 virtual meetings and more than 22,500 attendees for past in-person meetings. In addition, the AACR publishes nine prestigious, peer-reviewed scientific journals and a magazine for cancer survivors, patients, and their caregivers. The AACR funds meritorious research directly as well as in cooperation with numerous cancer organizations. As the Scientific Partner of Stand Up To Cancer, the AACR provides expert peer review, grants administration, and scientific oversight of team science and individual investigator grants in cancer research that have the potential for near-term patient benefit. The AACR actively communicates with legislators and other policymakers about the value of cancer research and related biomedical science in saving lives from cancer. For more information about the AACR, visit www.AACR.org. Follow us: Cancer Research Catalyst; Twitter; and Facebook. For AACR information, visit Fast Facts.

About TGen, an affiliate of City of Hope
Translational Genomics Research Institute (TGen) is a Phoenix, Arizona-based nonprofit organization dedicated to conducting groundbreaking research with life-changing results. TGen is affiliated with City of Hope, a world-renowned independent research and treatment center for cancer, diabetes and other life-threatening diseases: CityofHope.org.  This precision medicine affiliation enables both institutes to complement each other in research and patient care, with City of Hope providing a significant clinical setting to advance scientific discoveries made by TGen. TGen is focused on helping patients with neurological disorders, cancer, diabetes and infectious diseases through cutting-edge translational research (the process of rapidly moving research toward patient benefit). TGen physicians and scientists work to unravel the genetic components of both common and complex rare diseases in adults and children. Working with collaborators in the scientific and medical communities worldwide, TGen makes a substantial contribution to help our patients through efficiency and effectiveness of the translational process. For more information, visit: tgen.org. Follow TGen on Facebook, LinkedIn and Twitter @TGen.

About City of Hope
City of Hope is an independent biomedical research and treatment center for cancer, diabetes and other life-threatening diseases. Founded in 1913, City of Hope is a leader in bone marrow transplantation and immunotherapy such as CAR T cell therapy. City of Hope’s translational research and personalized treatment protocols advance care throughout the world. Human synthetic insulin and numerous breakthrough cancer drugs are based on technology developed at the institution. A National Cancer Institute-designated comprehensive cancer center and a founding member of the National Comprehensive Cancer Network, City of Hope has been ranked among the nation’s “Best Hospitals” in cancer by U.S. News & World Report for 14 consecutive years. Its main campus is located near Los Angeles, with additional locations throughout Southern California. For more information about City of Hope, follow us on Facebook, Twitter, YouTube or Instagram.