Jennifer Barton is identifying biomarkers and creating optical imaging tools to screen for a form of cancer often called a “silent killer” of women. 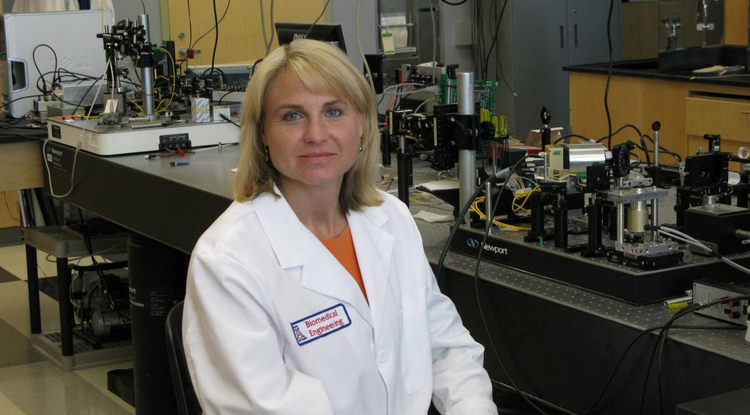 University of Arizona researcher Jennifer Barton is leading a two-year, $1 million project funded by the National Cancer Institute to identify imaging biomarkers of ovarian cancer, the most deadly gynecological cancer in the United States. In fact, 70 percent of women diagnosed have advanced ovarian cancer that has spread beyond the fallopian tubes and ovaries to other organs, she said.

In collaboration with UA researchers in physiology, medical imaging, and obstetrics and gynecology, Barton is working to identify imaging biomarkers, or subtle changes in the tissue that can be detected by sensitive optical methods, for ovarian cancer in mice. The mice spontaneously develop ovarian tumors and mimic hormonal conditions of postmenopausal women, who are most often diagnosed with the disease.

Using three high-resolution optical imaging techniques — optical coherence tomography, fluorescence imaging and multiphoton microscopy — the researchers are obtaining in vivo images of the animals’ ovaries and fallopian tubes and analyzing physical and biochemical changes over time to create a map of the changes that happen during ovarian cancer.

“This gives us a very controlled way of looking at ovarian cancer,” Barton said. “We can observe developments over just a few months that would occur over several years in women with the disease.”

The researchers also will develop contrast agents to study overexpression of cell surface receptors that could be targeted to increase sensitivity to imaging.

Currently, the only way to confirm ovarian cancer is with a surgical biopsy.

“Our goal is to identify biomarkers at the earliest possible stage of ovarian cancer to build a viable optical imaging technology that will enable early detection and save lives,” Barton said. “We believe that early in ovarian cancer development, there are clusters of cells in the fallopian tube that have abnormal microstructure and fluorescence. We believe we can detect these cells before they spread to the ovary and cause advanced cancer.”

Dr. Evan Unger, a UA professor of radiology and bioengineering who, with Barton, co-leads the Cancer Imaging Program at the Arizona Cancer Center, said the predictive biomarkers will help more accurately stratify women in risk groups for ovarian cancer and “open the door for more intensive screening using a noninvasive or minimally invasive technique like the microendoscope Dr. Barton has developed.”

Barton’s tiny, highly flexible endoscope, or falloposcope, is a wandlike imaging device that combines several optical imaging techniques to detect ovarian cancer in the fallopian tubes, where many researchers believe the cancer originates. Her team already has tested rigid prototypes in pilot clinical studies, but the new flexible version will not require any incisions, making it more suitable for screening.

Caught early, ovarian cancer often can be treated effectively with surgery and chemotherapy. But with no good tools for catching it early, fewer than half of women diagnosed survive five years.

Women who receive manual exams, pelvic ultrasound or blood tests for the CA-125 protein, which may indicate elevated risk, are no less likely to die from ovarian cancer than are women who don’t. Further, most women diagnosed have none of the associated risk factors, such as a family history of the disease or mutations of the BRCA genes.

The Centers for Disease Control and Prevention reports that about 20,000 U.S. women are diagnosed each year with ovarian cancer and 14,000 die from the disease.

Meredith Mitstifer is one of the lucky ones. At 30, while visiting a fertility specialist, she had an ultrasound test that revealed a large mass in her left ovary. A few weeks later, preparing for surgery, she learned she was pregnant. She had the diseased ovary removed and biopsied, confirming early stage ovarian cancer. She went on to give birth to a boy, Ryan, who is now a healthy teenager.

Mitstifer, a clinical psychologist for the Federal Bureau of Prisons, is approaching her 14th year with no evidence of disease. She serves on the board of the National Ovarian Cancer Coalition and has participated in Survivors Teaching Students: Saving Women’s Lives, an Ovarian Cancer National Alliance program in which ovarian cancer survivors share their stories with UA medical students.

“I’ve lost many friends to this awful disease, and have many other friends who are dying from it,” she said. “Many of them desperately want to see advances in diagnosis and treatment and, ultimately, a cure, so their own children won’t have to go through what they have. An effective screening process would be a great start.”

Save the date: The Tucson chapter of the National Ovarian Cancer Coalition will host its first Walk to Break the Silence on Nov. 6, from 8 a.m. to noon, on the UA Mall. Email tucsonaz@ovarian.org(link sends e-mail) for more information.