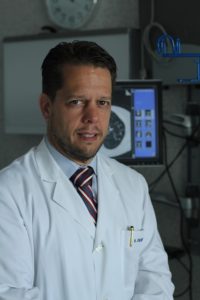 “After more than 16 years in lung cancer screening, I am excited about the impact VisionGate’s technology can have on early lung cancer detection by solving many of the problems associated with low-dose CT.” Dr. Zulueta said. “Perhaps even more importantly, I’m driven by the potential to eradicate this deadly disease with its new chemoprevention therapy.”

Prior to joining VisionGate, Dr. Zulueta led the longest ongoing lung cancer screening trial in Europe. The study is part of the International Early Lung Cancer Action Program (I-ELCAP) consortium, of which he has been a Principal Investigator since its inception in 2000.

Dr. Zulueta has served as a member of VisionGate’s Medical Advisory Board (MAB) for nearly five years. His research interests include lung cancer screening and the relationship between lung cancer and COPD and emphysema. He has authored more than 100 publications in peer-reviewed journals and has been an invited lecturer at more than 100 international conferences.

He is a Fellow of the American College of Chest Physicians and Member of the American Thoracic Society, American Respiratory Society, European Respiratory Society and Spanish Association of Pulmonary Medicine and Thoracic Surgery. Dr. Zulueta received his Medical Doctorate from the Universidad Complutense in Madrid, Spain. His specialization in pulmonary and critical care medicine was earned at the New England Medical Center, Tufts University School of Medicine in Boston.

“As VisionGate enters its translational phase leveraging the company’s patented technologies for lung cancer early detection, pre-cancer detection, and chemoprevention drug therapy, Dr. Zulueta will assume the leadership role in driving the multi-center clinical trials toward regulatory clearance in the U.S. and Europe while the company drives toward commercialization and physician practice acceptance,” VisionGate Founder and CEO Alan Nelson, PhD said. “Dr. Zulueta has been a clinical pioneer for improved patient outcomes in lung cancer and is well aligned with VisionGate’s corporate mission to eradicate lung cancer globally using its pioneering products for screening and treatment.”

“There is a very close relationship between the technical and clinical drivers of VisionGate.” VisionGate Chief Technology Officer Michael Meyer said. “Dr. Zulueta will be an important hire to help bridge the two, and we are delighted he is joining VisionGate at this pivotal time.”

VisionGate, Inc. is led by Dr. Alan Nelson, physicist, bioengineer and entrepreneur who previously developed the world’s first and only automated screening test to detect cervical cancer, marketed globally today as FocalPoint by Becton Dickinson. VisionGate’s proprietary LuCED test is a non-invasive diagnostic test for early-stage lung cancer, demonstrating exquisite sensitivity and specificity in blinded clinical studies. This physician-ordered, take-home sputum test is processed on the world’s first automated 3D cell imaging platform, the Cell-CT, named aptly because it is similar in principle to taking a CT scan of individual cells, but using visible light without harmful radiation. Moreover, with the new exclusive patent license from the University of Colorado for the drug called Iloprost, VisionGate will drive the therapeutic market for chemoprevention of lung cancer and, ultimately, the eradication of this killer. With 145 issued patents in 13 countries, VisionGate expects to play a leading role in the battle against the world’s number one cancer killer.