What if you could experience full health until the very end of your life? UA researchers, led by Dr. Janko Nikolich-Zugich, think long-lasting immunity from disease might be possible — if the thymus and the T-cells it produces to fight infection can be brought back to work efficiently. 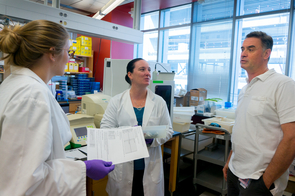 A framed, black-and-white photo of Dr. Janko Nikolich-Zugich rests on a bookshelf in his office. He is seen in profile, head bent, a pen tucked into the pocket of his lab coat. Nikolich-Zugich is at work at his lab bench at New York’s Memorial Sloan Kettering Cancer Center.

Twenty-five years after the photo was snapped, Nikolich-Zugich, his black hair now touched with gray, finds himself at his office at the University of Arizona talking with visitors about his latest research — and his latest grant, a five-year, $10 million endeavor.

The grant, he says, is going toward “studying what is considered a holy grail of aging.” He explains that he and his collaborators want to figure out “if we can bring back the immune system to the way it was when we were young.”

As we age, cells that defend against infection are gradually lost because we stop making them, he says. This is particularly true with T-cells, and the result is often an onslaught of infectious diseases later in life. By rejuvenating the immune system, the researchers are hoping to stop that onslaught.

“T-cells are made in the specialized T-cell factory that sits behind our chest bone, and this is called the thymus,” Nikolich-Zugich says. “T-cells are critical in orchestrating an immune response.”

However, by the time we have gone through puberty, the thymus is churning out only one-tenth of the T-cells it made before puberty, says Nikolich-Zugich, chair of the UA Department of Immunobiology, co-director of the UA Arizona Center on Aging and a member of the BIO5 Institute.

What’s more, there is evidence that between age 40 and 50, there’s another tenfold drop, he says.

“Down to 1 percent,” Nikolich-Zugich says. “So, the good news is it’s not down to zero. The bad news is you’re not producing many T-cells. That’s really the earliest manifestation of our aging, the shrinking of the thymus.”

However, even if the thymus remained plump and pumped out T-cells at a mad rate, it would be for naught. With age comes the sullying of the lymphatic system, whose job it is to circulate lymph and serve as a highway for T and other immune cells, equipped with vital communication checkpoints.

In essence, the immune system consists of immune cells, including T-cells, which circulate throughout the body, and lymphoid organs, such as the thymus, spleen and lymph nodes, where immune cells assemble to communicate with one another. After arriving at a particular location, such as a lymph node located near the scene of an injury, the T-cells rally to mount an immune response to viral or bacterial invasions.

Part of that response involves a breathtaking rate of cell division (proliferation).

“I think that’s something most people can relate to because they’ve had swollen lymph nodes at least once in their life,” Nikolich-Zugich says. “The reason the lymph nodes are swollen and painful is that there are lymphocytes in there that are dividing a lot. Essentially quadrupling the lymph node’s size.”

“Instead of a high fever and swollen lymph nodes, the older person will be disoriented because that fever brewing on the inside will lead to cognitive changes and to delirium,” Nikolich-Zugich says.

“If you ask a geriatrician or an infectious disease doctor, they will tell you that the cardinal sign of infection in kids is that the lymph nodes are going to swell and get painful. But when you get above a certain age, that almost never happens.”

In fact, researchers see a lot of fibrosis in the lymph node, meaning the connective bundles are starting to get thicker, less organized and less flexible.

“Lymph nodes aren’t able to effectively call in the cells from the outside, so fewer cells arrive,” he says. “Moreover, when the cells arrive, they don’t move inside like they should. Inside the lymph node is a superhighway meshwork, and we have found that this really gets messed up in aging.”

Scientists have tried rejuvenating only the thymus by blocking the body’s androgen production to increase its T-cell production, but increased, long-lasting immunity has proved elusive for the very reason that T-cells can’t gain entrance to the lymph nodes.

So, Nikolich-Zugich and his collaborators are formulating a novel plan of attack.

“There is one important part of this grant that is different from the approaches that people have been taking from the past,” Nikolich-Zugich says. “The novel idea here is that we want to rejuvenate both the thymus and the peripheral lymph organs, so both the factory that makes the cells and sites where the T-cells go to do the real work of defense against infection can once again work together.

“We feel like we will never get to rejuvenation if we work only on the thymus.”

In fact, the grant, sponsored by the National Institutes of Health, is a program project grant, which by design includes several interrelated individual projects, each run by Nikolich-Zugich and his collaborators. Some of the projects look at the thymus, others at the lymph nodes.

It should be noted that no matter which part of the immune system is to be scrutinized by the many collaborators, rigorous scientific methodology is essential to the success of the project and not to be trivialized. Which is where Nikolich-Zugich’s collaborator Megan Smithey comes in. Smithey is a UA research assistant professor in the Department of Immunobiology and has a doctoral degree from Oregon Health & Science University.

“My role is to be a central testing house,” she says. “The idea is that there are four primary testing groups that are asking discrete questions about how the immune system ages and coming up with interventions that might help. We’ll have one testing facility and a standardized set of tests. Then, we can compare apples to apples instead of whether something works in one system but not in another system.”

“If we are successful, we will see an improvement in immune defense and survival,” Nikolich-Zugich says. “Older adults are still by far the largest population for which infectious diseases still represent a significant risk. With this grant, our dream is to bring back the thymus and the T-cells to work the way that they should, particularly if we can fix the lymph nodes. That’s not only going to benefit the T-cells but it will benefit the entire immune system.”

By bolstering the entire immune system, Nikolich-Zugich and his collaborators believe they can increase our so-called “health-span extension” — that is, extend the time we spend in good health as we age.

Toward a Better Quality of Life

“The holy grail of gerontology is that we can all live in full health until about the last year of life,” Nikolich-Zugich says. “It’s the quality of life that’s important. If we can also extend life by some years, so much the better.”

Nikolich-Zugich says of late, he has come to realize that his research bolsters one of the missions of the UA Arizona Center for Aging, too, and that is to make sure that older adults are regarded as a societal resource, not cast aside.

“My dream is to put all of these pieces together where people are living long and fulfilling lives without many chronic diseases at the same time,” he says.

“Our lifespan has been extended, but the problem is that for a sizable number of people, they’re dealing with chronic diseases the last 15 or 20 years of life, and that is the part I’d like to get rid of. That is the dream of gerontology and the promise of the biology of aging research.”