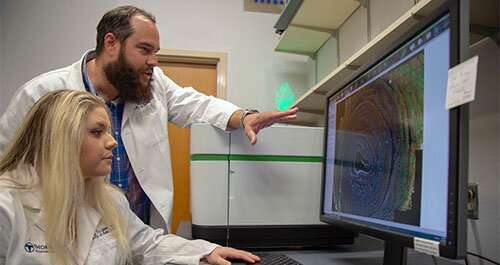 Curtis Thorne, PhD, an assistant professor, cellular and molecular medicine, accepted the challenge and called upon one of his doctoral students, Carly R. Cabel, to assist in the project.

The goal was simple: determine whether therapeutic targeting of a specific protein – LRP6 – is a suitable treatment strategy for colon cancer. If so, this would challenge the current scientific dogma and approaches to patient care.

The National Cancer Institute lists colorectal cancer (cancer in the colon or rectum) as the fourth-most common cancer diagnosed in the United States. More than 145,000 new cases are expected in 2019.

A potential breakthrough to therapeutic targeting of colon cancer starts in the biology of the cancerous cells. Previously accepted research identified a protein called adenomatous polyposis coli (APC) as a tumor suppressant in the colon. When functioning properly, the APC protein prevents cells from growing and dividing too quickly or uncontrollably.

When APC is mutated and loses its function, however, the effects can be harmful. One result is abnormal activation of signaling pathways (how cells communicate with each other) that can lead to cancer.

“In colon cancer, the Wnt (‘went’) pathway is used to control the proliferation of cells that line the colon,” Dr. Thorne said. “This pathway gets turned on inappropriately to where it is signaling too much. That drives colon cancer.”

In healthy gut cells, the Wnt pathway consists of a cell surface receptor, similar to an antenna, called LRP6 that “listens” to signals in the tissue environment to tell cells when to grow or when to stop growing. In cases where an APC mutation occurs, the Wnt pathway is turned on inside the cell instead of at the surface. When this happens, APC mutant cells are thought to completely ignore signals coming from the LRP6 receptor. Scientists generally believed there is little use in targeting LRP6 with therapeutics because of the “downstream” pathway triggering by APC.

That was the common thinking until a team of researchers led by Ethan Lee, MD, PhD, at Vanderbilt University and Yashi Ahmed, MD, PhD, at Dartmouth College discovered that Wnt receptors like LRP6 still can promote growth even when the pathway is mutated downstream at APC.

The researchers concluded targeting this protein therapeutically may be a treatment strategy to consider in blocking progression of colon cancer. Their findings were published in the March 2018 edition of Developmental Cell, a broad-interest journal covering the areas of cell biology and developmental biology.

After the report was published, researchers at Harvard Medical Center, led by Xi He, PhD, attempted to repeat the results. However, the team at Harvard, using a slightly different experimental approach, was unable to do so. This apparent conflict prompted Dr. Lee of the original study to contact Dr. Thorne at the UA Cancer Center at the end of 2018 to further explore the findings. Dr. Thorne’s lab presented an opportunity for a new technique not used in the first two studies: single-cell profiling. This was done using patient-derived colon tissues, including both healthy and cancerous cells, grown in the lab.

Cabel, who holds a bachelor’s degree in molecular and cellular biology from UA and was the recipient of the John and Betty Anderson Memorial Fellowship, was tasked with a majority of the project’s work. The fellowship supports first-year graduate students who have elected to pursue a career in cancer research. For her experiments, Cabel relied on a high-throughput microscope called the Operetta CLS, cutting-edge technology available through UA’s Functional Genomics Core, to take thousands of images of colon cancer cells. She then analyzed millions of cells captured in the images using custom software developed by Elaheh Alizadeh, PhD, a postdoctoral research associate in the Thorne lab at the UA.

“I think what we brought to the table is this resource of colon cells with specific and defined mutations,” Cabel said. “I measured the activity of the Wnt pathway in every single cell individually and compared it before and after inhibition of LRP6.”

When the project was completed in spring 2019, Dr. Thorne and Cabel were able to repeat the results of the initial research teams at Vanderbilt and Dartmouth. Cabel was the first-author of a June 2019 letter published in Developmental Cell detailing the findings. This was published alongside a letter from the Harvard group detailing their challenges in repeating the finding from the original study.

As the principal investigator for the study, Dr. Thorne said, “These kinds of conflicts are more common than we’d all like to believe in biomedical research. I commend the editors of Development Cell for providing a forum for openly discussing conflicting results among research groups. We need more of this open dialog in scientific publishing, not less.”

Dr. Thorne believes this research has validated an important target that should be considered for therapeutic treatments of colon cancer.

“I think in colon cancer, as well as other types of cancer,” Dr. Thorne said. “We should not ignore LRP6 and it should be toward the top of the list for drug targets in the Wnt pathway.”

For Cabel, her first published work is a rewarding step in the journey to pursue a PhD and a career in cancer research.

“I think the biggest takeaway from this is the concept of collaboration,” Cabel said. “The best groups are going to have lots of researchers working on a common goal, especially in our case with cancer. We want to get the best science and research out there for the best care, because that’s what is most important.”

About the University of Arizona Cancer Center