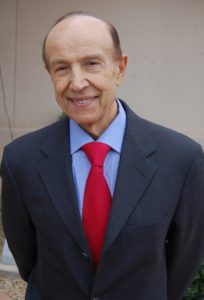 Dr. Peyman, who worked with Nasser Peyghambarian, PhD, and James Schweigerling, PhD, from the UA James C. Wyant College of Optical Sciences, created a device that can produce an objective and accurate eyeglass prescription in 20 seconds without any subjective input from the patient.

The device was recently backed by Tucson’s UAVenture Capital to develop the technology and advance it through the U.S. Food and Drug Administration’s approval process.

A phoropter, or refractor, is an instrument used to test individual lenses during an eye exam that was invented in 1921. Although modified over the years with new lenses, the same technology is being used today. With more than 100 lenses on each side, the original phoropter is bulky, subjective, expensive and time-consuming to use.

We created a new hand-held device that is a smaller, faster and less expensive option. It uses only three fluidic lenses that can change their focal length by pumping fluid in and out of a chamber.

Why is This Important?
The standard method of an eye exam is very subjective. The current process requires a patient to differentiate between the first and second image, which is not easy for anyone, especially children or the elderly. This device will take away the guessing for both the patient and provider.

Because the device is portable and no longer requires any subjective input from the patient, it can specifically help individuals who have difficulty speaking English, children, elderly and those living in rural areas or in undeveloped areas around the world.

The human eye can differentiate much better than what glasses currently on the market can provide. If we can measure the refractive error down to the fraction, we can make lenses more accurate.

What was Your Motivation for Improving Eye Examination Technology?

Why Now?
In the U.S. alone, more than 8 million individuals have never seen an ophthalmologist or optometrist for a number of reasons: They don’t have the time, they don’t have access to specialists or it’s too expensive. Another 3 million need vision correction.

That’s an incredible loss of productivity. In the world, we can imagine there are more than a billion individuals suffering from vision impairment, which can be corrected. Our device can help change this.

The device resembles a small telescope. It’s placed in front of one eye and the patient is asked to focus on an image 20 feet away. While the patient focuses on the image, the system sends an infrared light inside the eye. The light reflects off the retina, passes through three fluidic lenses and carries it to the sensor. If the light reflected off the retina comes back distorted, the sensor will detect it and will instruct a small pump to increase or decrease the fluid in the lenses until the sensor sees the light without distortion. The process takes less than 20 seconds, but during this time, the system evaluates hundreds of options until the right correction is achieved.

Founded in 2007, the University of Arizona College of Medicine – Phoenix inspires and trains exemplary physicians, scientists and leaders to optimize health and health care in Arizona and beyond. By cultivating collaborative research locally and globally, the college accelerates discovery in a number of critical areas — including cancer, stroke, traumatic brain injury and cardiovascular disease. Championed as a student-centric campus, the college has graduated 500 physicians, all of whom received exceptional training from nine clinical partners and more than 2,000 diverse faculty members. As the anchor to the Phoenix Biomedical Campus, which is projected to have an economic impact of $3.1 billion by 2025, the college prides itself on engaging with the community, fostering education, inclusion, access and advocacy.