Researchers’ goal is to improve radiation testing through gene expression. 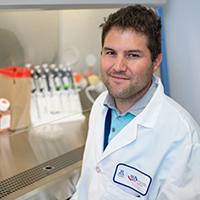 Researchers at the University of Arizona College of Medicine – Phoenix are attempting to create a better diagnostic test for radiation exposure that potentially could save thousands of lives.

Jerome Lacombe, PhD, an assistant professor and researcher at the UA Center for Applied NanoBioscience and Medicine, recently published a peer-reviewed study in the Public Library of Science journal PLOS ONE.

His study compiled a list of genes reported to be affected by external ionizing radiation (IR), and assessed their performance as possible biomarkers that could be used to calculate the amount of radiation absorbed by the human body.

“In the case of a nuclear event, a lot of people can be radiated,” Dr. Lacombe said. “That is why it’s so important that we can quickly and accurately assess the absorbed radiation so we can give patients the proper medical treatment as fast as possible.”

Dr. Lacombe hopes to develop a radiation test that is less labor intensive and takes only two days for results.

“If you have thousands of people and only two days to screen everyone, it would be almost impossible to do this with the current exposure test,” Dr. Lacombe said. “With immediate care and the right diagnostics, people could have a better chance of survival.”

Although many studies have tried to correlate gene expression after radiation exposure, their sample sizes have been small because of expense and the time it takes to test the genes. By combining 24 studies, Dr. Lacombe and his team investigated a large data set using a standardized data extraction method and various statistical algorithms to find a list of robust candidate biomarkers.

This marks the first time a team has combined all these biomarkers and attempted to run a diagnostic assay to determine radiation exposure, Dr. Lacombe said.

The authors received financial support from the Center for High-Throughput Minimally-Invasive Radiation Biodosimetry (National Institute of Allergy and Infectious Diseases, grant No. U19 AI067773).

The UA Center for Applied NanoBioscience and Medicine is on the forefront of developing radiation treatment and diagnostics. In collaboration with Columbia University, the Translational Genomics Research Institute (TGen) and Georgetown University, the center has been co-sponsored by the National Institute of Allergy and Infectious Diseases for 14 years. The partnerships have resulted in leading the development of gene expression-based biodosimetry technology platforms sponsored by several contracts with the Biomedical Advanced Research and Development Authority (BARDA).

The center has expanded its areas of research applications in radiation biology, including:

Founded in 2007, the University of Arizona College of Medicine – Phoenix inspires and trains exemplary physicians, scientists and leaders to optimize health and health care in Arizona and beyond. By cultivating collaborative research locally and globally, the college accelerates discovery in a number of critical areas — including cancer, stroke, traumatic brain injury and cardiovascular disease. Championed as a student-centric campus, the college has graduated 433 physicians, all of whom received exceptional training from nine clinical partners and 1,800 diverse faculty members. As the anchor to the Phoenix Biomedical Campus, which is projected to have an economic impact of $3.1 billion by 2025, the college prides itself on engaging with the community, fostering education, inclusion, access and advocacy. For more information, please visit phoenixmed.arizona.edu