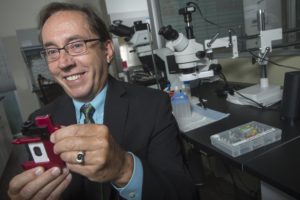 “The survey results confirm what we had anticipated – that the LuCED diagnostic test combined with our Iloprost drug therapy will deliver a much-needed impact in the standard of care for lung cancer.”

Two recent surveys conducted by an independent, third-party research group validated the market demand for VisionGate’s LuCED test as well as its recently licensed drug therapy, Iloprost, in the diagnosis and treatment of patients at risk of lung cancer.

LuCED, represented as “Product X” in surveys among 100 pulmonologists, is a non-invasive test to aid in the early detection of lung cancer. To date, LuCED has also demonstrated the ability to detect dysplasia, a condition that often precedes lung cancer. The results of the survey showed that 60 percent of pulmonologists would use VisionGate’s LuCED test today based on current clinical evidence. Reasons cited included LuCED’s current sensitivity (92-95 percent for early stage lung cancer) and specificity (99 percent), avoidance of radiation, convenience and the non-invasive method of testing.

Another area of interest among the pulmonologists surveyed was preventative medicine, or chemoprevention drug therapies that help reverse the disease process before it advances to life-threatening cancer.

In January, VisionGate announced it had acquired exclusive rights to the chemoprevention drug Iloprost. Overall, 72 percent of the pulmonologists surveyed found Iloprost attractive in the future treatment of endobronchial dysplasia.

“The survey results confirm what we had anticipated – that the LuCED diagnostic test combined with our Iloprost drug therapy will deliver a much-needed impact in the standard of care for lung cancer,” VisionGate Founder and CEO Alan Nelson, PhD, said. “The optimism from the pulmonologist community demonstrates their commitment to early detection and an openness to our test + treat (Dx/Rx) model.”

VisionGate, Inc. is led by Dr. Alan Nelson, physicist, bioengineer and entrepreneur who previously developed the world’s first and only automated screening test to detect cervical cancer, marketed globally today as FocalPoint by Becton Dickinson. VisionGate’s proprietary LuCED test is a non-invasive diagnostic test for early-stage lung cancer, demonstrating exquisite sensitivity and specificity in blinded clinical studies. This physician-ordered, take-home sputum test is processed on the world’s first automated 3D cell imaging platform, the Cell-CT, named aptly because it is similar in principle to taking a CT scan of individual cells, but using visible light without harmful radiation. Moreover, with the new exclusive patent license from the University of Colorado for the drug called Iloprost, VisionGate will drive the therapeutic market for chemoprevention of lung cancer and, ultimately, the eradication of this killer. With 145 issued patents in 13 countries, VisionGate expects to play a leading role in the battle against the world’s number one cancer killer.