Last week was a busy week on the Budget Front as President Trump signed  a $1 Trillion spending package that funds the federal overnment through the end of September and the Arizona Legislature sent its $9.8 Billion Budget Packet to Governor Ducey.  Both spending plans send a strong message that research matters.

What Happened in Washington DC

On Friday May 5, 2017, President Trump signed a $1 trillion spending bill to keep the government operating through September which is the normal end of the federal fiscal year.   Congress will now turn its attention to crafting the budget for the 2017-2018 fiscal year that begins on October 1, 2017,

Earlier this year, President Trump had suggested at $1.2 billion cut to NIH Funding for this spending plan.  Thankfully, Congress d-d not agree.  Medical research was protected and NIH funding was actually increased by $2 billion increase on top of the funding that was already expected for the period ending September 30, 2017.   The  additional funding includes:

As Congress now works on the budget for the next fiscal year, there will be ongoing discussions comparing President Trump’s proposed  $5.8 billion cut and strong congressional support of life saving and life changing innovation across the spectrum fro discovery to development to delivery as  set forth in 21st Century Cures. 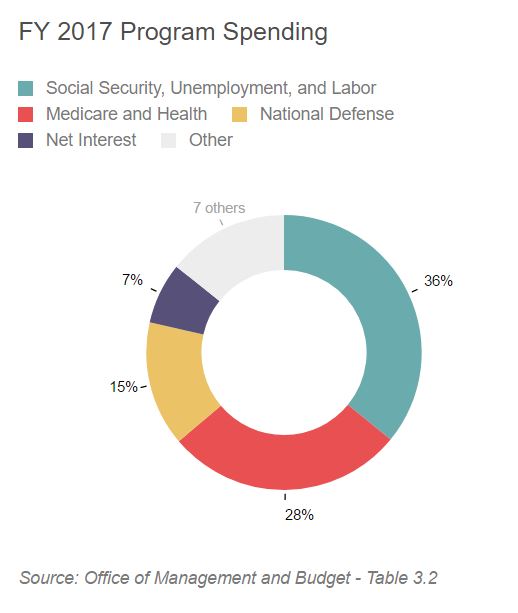 ACA, AHCA and what comes next

The other big news story from DC last week was the passage of HR1628 : American Health Care Act of 2017 (AHCA)  in the House of Representatives on Thursday May 4th.    The bill now moves to the Senate for ongoing work and debate.  Changes are expected by many as the Senate has historically been a more moderate chamber.  The Senate will also have the benefit of a score from the Congressional Budget office during their discussions.  (Due to changes in the  AHCA prior to the House vote, a CBO score was not available.)

Having some sense of surety on what comes next for healthcare will be a key factor in budget discussions for the next fiscal year.  In FY 2017, Medicare and Health Spending is estimated to be over $1.3 trillion or 36% of all federal spending making it the largest of all federal programs.

While about one and a half miles of Pennsylvania Avenue spans the distance between the White House and Congress, here in Arizona, our government  is clustered together within the Arizona Capitol Complex on Washington Street.

In the early hours of May 5th, the Arizona Legislature passed its FY 2018 Budget Package which is expected to be signed by Governor Doug Ducey on May 8th.   As with the federal government, healthcare is the single largest program by spending in the state at roughly 41% of the budget in FY  2017. (Source and Graph)

Key Funding in Arizona’s FY 2018 Budget includes the addition of funding for the three state universities for  infrastructure investments from FY2019 through FY2043.  One of the most actively debated topics at the State Capitol this session, the appropriation will  allow the universities to bond up to $1 billion for university research infrastructure.  (Read more about this a major win for Arizona’s innovation agenda at One Billion Reasons Why University Research Has a Brighter Future in Arizona)

Funding for Arizona’s Angel Investor Tax Credit, another key item on Arizona’s innovation agenda, was not addressed as part of the budget. HB2191  proposes a $2.5 million funding level for AZ FY 2018, 2019, 2020, and 2021 when the current program expires.  For this to be enacted, the legislature will need to approve HB2191 prior to adjourning sine die.

For a recap  of all bills tracked by AZBio at Arizona’s Capitol this session click here.