As the second leading cause of death worldwide, cancer is a focal point in both clinical research and health care fields, but not all cancers are created equal. While some cancers are now much less deadly due to recent medical advances, other aggressive cancers remain highly resistant to currently available therapies. 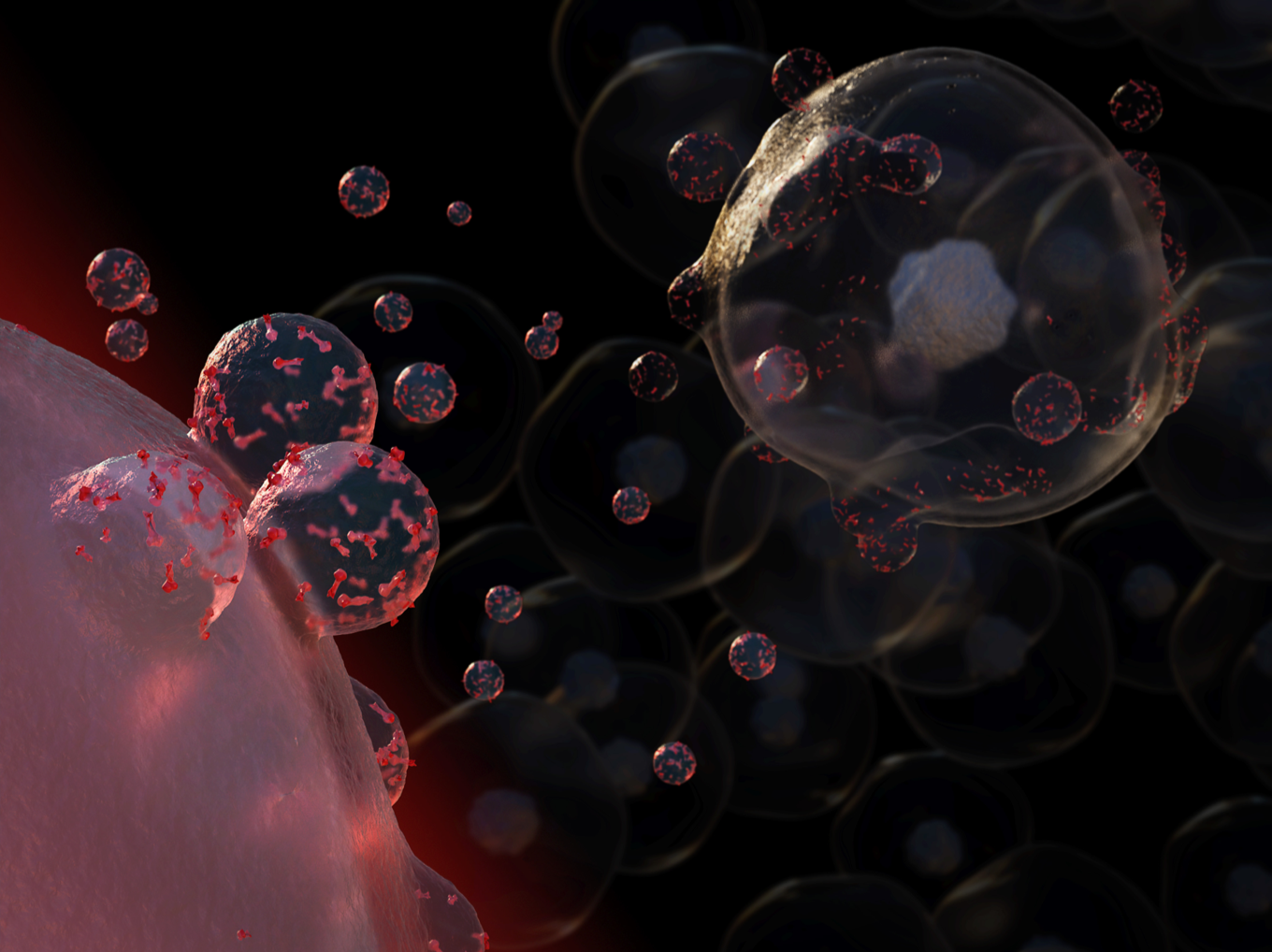 An image depicting the essentials of the investigators’ research was used as the cover of the Theranostics issue that published their study, and portrays pancreatic cancer cells with exosomes budding off as they are released to transmit drug resistance to other adjacent cancer cells. | Graphic by Jason Drees

“Researchers are still working on the mechanisms behind drug resistance. One potential point of interest is the heterogeneity in the tumor microenvironment,” Jia Fan said.

A tumor contains a large assortment of cells that differ slightly in their genetic makeup due to an ongoing mutation process. This genetic heterogeneity provides a tumor with a suite of cells that may respond differently to treatment, enhancing the probability that some tumor cells will be able to evade therapy and go on to multiply and wreak havoc.

Identifying mechanisms driving therapy resistance is a crucial step towards improving patient outcomes. To this end, researchers are working to develop biomarkers of this resistance—factors produced by cancer cells that can serve as early warning beacons of therapy resistance.

Biodesign researchers Jia Fan and Bo Ning uncovered a cause of resistance to chemotherapy drugs, or “chemoresistance,” in a cover story for the peer-reviewed medical journal Theranostics.

“For pancreatic cancer, most of the patients are sensitive to the chemo-drug at the beginning of treatment, but over time, they grow resistant to the therapy,” Fan said. “They acquire drug resistance.”

A major question is how non-resistant cancer cells acquire this drug resistance.

Exosomes are very small vesicles released by most cells, including cancer cells, that contain factors derived from the cytoplasm and both the endosomal and plasma membranes of their parent cells. These factors can alter the function of exosome recipient cells, although there was no evidence that they could directly transfer chemoresistance before this study.

Fan and Ning tested their hypothesis by first demonstrating that exosomes purified from chemoresistant pancreatic cancer cells could transfer this resistance to non-resistant cells. They then analyzed these exosomes to identify potential factors that could confer this resistance.

“The protein expressed on these types of exosomes may be a potential target for future treatment and also could be used as a method to predict whether patients will have subsequent drug resistance or will still be sensitive to the drugs,” Fan said.

Their subsequent experiments revealed that blocking the expression of one of these factors greatly reduced chemoresistance transfer via an exosome-dependent mechanism.

Since exosome-derived factors can be detected in standard blood samples, these results suggest this chemoresistance-associated factor, or others like it, could serve as a “minimally-invasive predictive biomarker for pancreatic cancer treatment response.”

This would be a major advance since standard methods used to assess cancer treatment responses are highly invasive and their accuracy may depend heavily upon the region captured in the tissue biopsy.

Their concept of exosome transfer of chemoresistance was depicted in a graphic by ASU’s Jason Drees for the cover of the Theranostics issue that published their research.

Ning, who specializes in stem cell research and cancer immunotherapy, was responsible for cultivating the human cell lines used in the study, and Fan, the primary author on the study, performed the exosome studies using these cell lines to examine the cause of chemoresistance.

Studies on this matter are far from over, however. The researchers hope to continue this work and eventually translate it into future pancreatic cancer treatments, since they believe that these exosomes contain factors that can be used to pinpoint specific drug resistance and guide appropriate therapy.

“Based on this study, maybe we can find more collaborators to accelerate and translate this study into clinical settings,” Fang said.

Fan has established a collaboration with MD Anderson Cancer Center in Houston, Texas, to analyze pancreatic cancer patient blood samples to determine the ability of the detected exosome biomarker to predict chemotherapy responses.

Ning attributes the success of the study to the fact that Biodesign promotes the sharing of ideas.

“Biodesign is quite an open environment where investigators, postdocs and undergrads are always encouraged to work together,” Ning said. “Competition is so high at other institutions, where individuals are discouraged from sharing their ideas and are more protective. Here, everybody is open with their ideas – they want to foster collaboration.”

Tony Hu, an associate professor at the Biodesign Virginia G. Piper Center for Personalized Diagnostics and at ASU’s School of Biological and Health Systems Engineering, mentored the researchers and aided in collaborations with the MD Anderson Cancer Center.

“This is a very unique study with great translational potential,” Hu said. “The discovery of a biomarker of therapy response would pave a new way for clinical prognosis in pancreatic cancer.”