Tempe, Arizona (July 23, 2015) – Using the brightest X-ray laser in the world, scientists have determined the structure of a molecular complex that is responsible for our sense of sight.

Researchers at Arizona State University’s Biodesign Institute Center for Applied Structural Discovery (CASD) collaborated with an international team of researchers from 19 institutions working to develop a roadmap for more selectively targeting pathways for drug treatment. The innovative approach may lead to more effective therapies with fewer side effects, particularly for diseases such as cancer, heart disease and neurodegenerative disorders. 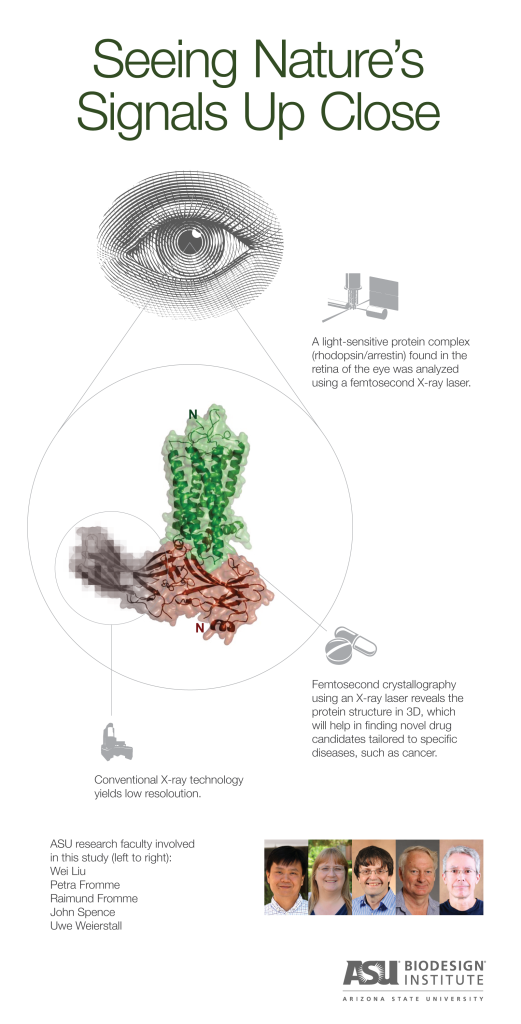 The study, “Crystal Structure of Rhodopsin Bound to Arrestin Determined by Femtosecond X-ray Laser,” was published online in the journal Nature.

The new research focuses on a signaling protein called arrestin, which plays a vital role in cellular communication, and a G protein-coupled receptor (GPCR) called rhodopsin, which is instrumental in our sense of sight.

Arrestin, as well as other signaling proteins known as G proteins, link up with GPCRs to convey important instructions for many essential physiological functions, such as growth and hormone regulation. G protein and arrestin pathways are physiologically distinct; GPCR drugs that selectively modulate one pathway are often preferred as they can have better therapeutic benefits with fewer undesirable side effects than non-selective drugs.

“Arrestin and G proteins are the yin and the yang of regulating GPCR function,” said H. Eric Xu, Ph.D., from Van Andel Research Institute (VARI), Grand Rapids, MI who led the study. “In the realm of drug development, a detailed understanding of the structure, interaction and function of each of these groups of proteins is vital to developing effective therapies. The more specific the interaction, the better the drugs tend to work while also lowering the chance of side effects.”

GPCRs make up the largest group of cell surface receptors and act as the information clearinghouse for cells. They receive “data” from external sources, telling the cells about their environment and conveying information from nearby cells. Cell surface receptors are excellent therapeutic targets due to their location on the surface of the cell, making them more accessible to drug treatment. Given their central roles in cellular communication, GPCRs are major targets in the development of new therapies and account for about 40 percent of current drug targets.

Researchers have been trying to determine the structure of a GPCR with arrestin for more than 2 decades, but the quest has been elusive until now. Rhodopsin is a GPCR and the key receptor for sensing light during vision, while arrestin is its major interacting partner, controling its function.

“Determining the atomic structures of proteins in their active states is critical for developing effective drugs with far fewer side effects,” said Petra Fromme, director of the Biodesign Institute Center for Applied Structural Discovery at Arizona State University, who was part of the research team. “In this work we were able to trap rhodopsin in its active state through binding one of its partner proteins, arrestin, and unravel its structure using Free Electron Lasers. This is a huge step forward and provides an excellent guide for developing new drugs with fewer side effects.”

Researchers at CASD helped to pioneer a new technique called femtosecond crystallography, which takes advantage of a cutting edge X-ray Free Electron Laser (XFEL) instrument at the Department of Energy’s (DOE) SLAC National Accelerator Laboratory, Stanford. The instrument can generate X-ray pulses that are a billion times brighter than previous X-ray sources, and that are so short that the biomolecule structure is imaged before it is destroyed. This capability allowed the team to create the three-dimensional image of the arrestin-rhodopsin complex at an atomic level—a much higher resolution than is possible with conventional X-ray technology. (Femtosecond X-ray pulses are almost unfathomably brief. The time difference between one femtosecond and a second is the same as the difference between a second and 32 million years!)

“This is an important step forward in understanding how human vision works at the molecular level, and a dramatic demonstration of the power of the X-ray laser at the SLAC DOE National Laboratory to reveal new molecular structures and their function,” said John Spence, Regents’ Professor of physics, Scientific Director for the National Science Foundation’s BioXFEL Science and Technology Center and member of the CASD research team.

Contributions from ASU researchers included crystallization and biophysical characterization of the rhodopsin-arrestin constructs and crystals, X-ray data collection and evaluation, as well as development of the devices that deliver the stream of nanocrystals.

In the future, the researchers hope to study the signaling protein arrestin with other GPCRs that are involved in heart disease and cancer as well as to use this structure to screen for drug compounds that are designed to treat these diseases with far fewer side effects, which will have a dramatic impact on human health.

“There are a number of other GPCRs that are critical to many of the processes in our bodies, like seeing, touching, hearing, smelling, tasting and feeling pain, and when they become dysfunctional it can lead to devastating diseases such as cancer” said Wei Liu, Assistant Professor in the Department of Chemistry and Biochemistry and member of CASD. “This study provides important clues about how we can improve human health and make important progress in the fight against cancer and other incurable human diseases.”

Arizona State University is the largest public research university in the United States under a single administration, with total student enrollment of more than 70,000 in metropolitan Phoenix, the nation’s sixth-largest city. ASU is creating a new model for American higher education, an unprecedented combination of academic excellence, entrepreneurial energy and broad access. This New American University is a single, unified institution comprising four differentiated campuses positively impacting the economic, social, cultural and environmental health of the communities it serves. Its research is inspired by real-world application, blurring the boundaries that traditionally separate academic disciplines. ASU champions intellectual and cultural diversity and welcomes students from all 50 states and more than 120 nations. www.asu.edu.

About the Biodesign Institute at Arizona State University

The Biodesign Institute at Arizona State University works to improve human health and quality of life through its translational research mission in health care, energy and the environment, global health and national security. Grounded on the premise that scientists can best solve complex problems by emulating nature, Biodesign serves as an innovation hub that fuses previously separate areas of knowledge to serve as a model for 21st century academic research. By fusing bioscience/biotechnology, nanoscale engineering and advanced computing, Biodesign’s research scientists and students take an entrepreneurial team approach to accelerating discoveries to market. They also educate future generations of scientists by providing hands-on laboratory research training in state-of-the-art facilities for ASU. biodesign.asu.edu

About the Biodesign Center for Applied Discovery

The Center for Applied Structural Discovery (CASD) unites a team of complementary research professionals from a wide range of disciplines, including biology, chemistry, physics and engineering, to develop and apply groundbreaking technologies and methodologies to accelerate the rate at which we discover the structure and associated function of biomolecules. Breakthrough knowledge will form the basis for fast progress on the path to technical innovations that improve human health and provide plentiful clean energy and food for future generations. The CASD mission is to develop new revolutionary techniques that reveal the structure and dynamics of biomolecules towards new visionary discoveries in medicine and energy conversion. biodesign.asu.edu/applied-structural-discovery

About the Van Andel Research Institute

Van Andel Institute (VAI) is an independent biomedical research and science education organization committed to improving the health and enhancing the lives of current and future generations. Established by Jay and Betty Van Andel in 1996 in Grand Rapids, Michigan, VAI has grown into a premier research and educational institution that supports the work of more than 270 scientists, educators and staff. Van Andel Research Institute (VARI), VAI’s research division, is dedicated to determining the epigenetic, genetic, molecular and cellular origins of cancer, Parkinson’s and other diseases and translating those findings into effective therapies. The Institute’s scientists work in on-site laboratories and participate in collaborative partnerships that span the globe. Learn more about Van Andel Institute or donate by visiting www.vai.org. 100% To Research, Discovery & Hope® http://www.vai.org/