On September 24, 2019, a letter was sent to Congressional Leaders in the Senate and House leadership on behalf of  a group of over six hundred innovators, patient groups, physicians, hospitals, venture capitalists and other stakeholders representing millions of patients and hundreds of thousands medical technology jobs,  requesting that Congress prioritize repeal of the medical device excise tax before it causes any more harm to the innovation ecosystem. 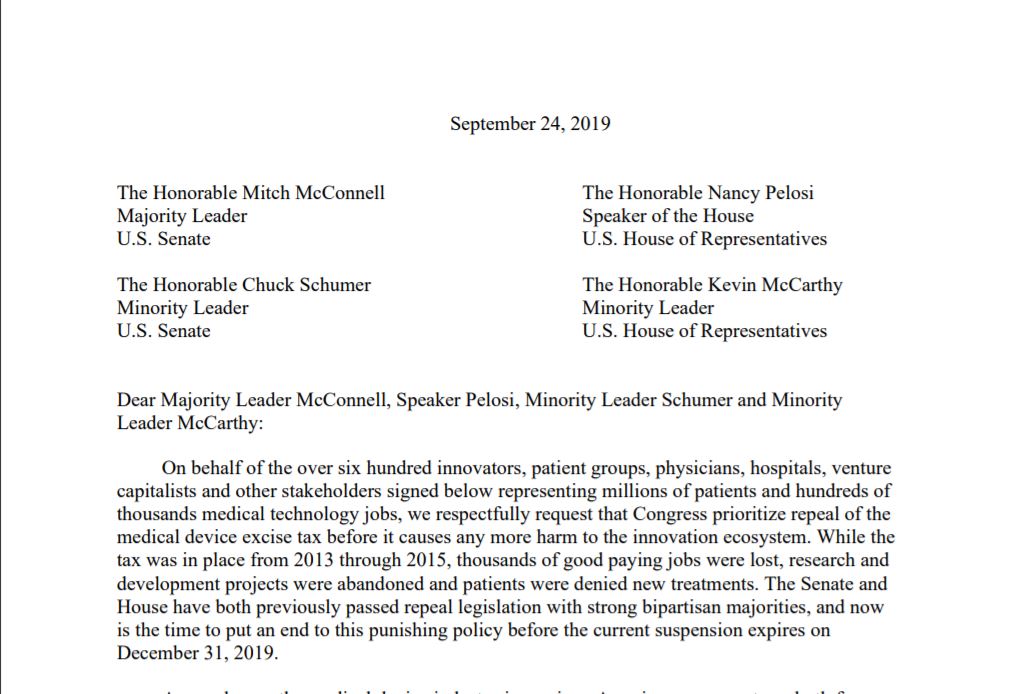 The majority of medical device companies are small businesses. Should the medical device tax suspension expire before the tax is repealed or the suspension is extended, small and emerging medical device companies, many of which have yet to attain profitability,  will be required to divert precious resources from development of products and jobs . The looming deadline of December 31, 2020, is already creating uncertainty for these companies and forcing them to readjust their growth plans.  This is especially troubling to the investors that these young companies rely on to survive.

Nine members of Arizona’s eleven member Congressional Delegation are co-signors on bills to repeal the medical device excise tax in their respective chambers.

The opening paragraph of their letter states:

“As members of the Arizona delegation who support a repeal of the medical device tax, we write to urge bipartisan action before the current suspension of the tax expires on December 31, 2019. We are extremely concerned its resumption will harm the sustainability of the medical device industry, which provides life-saving technology to millions of patients and supports 400,000 American workers, including over 17,000 in Arizona,”

The Arizona Congressional Delegation members who signed the letter are all cosponsors of the Protect Medical Innovation Act, which permanently repeals the medical device tax. Medical devices improve the lives of millions of patients every year and a return of the tax would raise health care costs on consumers. In addition, the medical device industry in Arizona supports thousands of jobs and contributes nearly $3 billion to Arizona’s economy.

The full text of the letter can be found HERE.