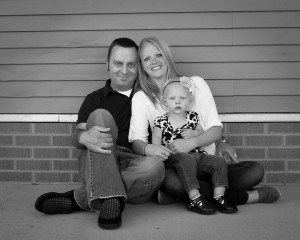 TUCSON, Ariz. – Aug. 13, 2014 – Andrew Weaver and his wife, Heather, feared he wouldn’t see their daughter, Haley, grow up because he was dying of heart failure. Instead, Andrew gets to cherish family moments that he would have missed, thanks to the SynCardia temporary Total Artificial Heart that bridged him to a heart transplant and his great medical team at the Intermountain Medical Center Heart Institute in Murray, Utah.

In February 2012, when the family lived in Utah, Andrew discovered he had been born with a congenitally malformed aortic valve and had developed an aneurysm (bulge) of the ascending aorta. This all came to light only after he experienced chest pains, which worsened over time.

In October 2012, doctors attempted to replace his aortic valve and a portion of his aorta, but following the procedure his heart wouldn’t start beating on its own. He was rushed to Intermountain Medical Center Heart Institute, where he was kept alive on ECMO, a machine that takes over the function of the heart and lungs, for a few days to see if he would recover—but he didn’t.

“He had profound biventricular failure,” Dr. Bruce Reid, surgical director of the Intermountain Medical Center Heart Institute’s Artificial Heart Program, said at the time. “We didn’t feel we could bridge him with anything less than a (SynCardia) Total Artificial Heart.”

Andrew was implanted with the SynCardia Total Artificial Heart on Oct. 18, 2012. Like a heart transplant, the SynCardia Heart replaces the two failed heart ventricles and four heart valves. It provides immediate blood flow of up to 9.5 liters a minute through each ventricle, more than what most healthy human hearts provide.

He regained his strength and eventually received a matching donor heart on Jan. 12, 2013.

Today, the family lives in Florence, Arizona. Andrew dotes on Haley. He takes her on outings, patiently allows her to paint his fingernails—“I’m just happy it’s green and not pink,” he says—and enjoys cuddling while they watch movies at home.

With a second chance at life, Andrew has changed his lifestyle. “I’m a lot more active now,” he says. “I’m conscious of what I eat and what I do. I’m not sitting on my butt playing video games.”

Once Andrew returned home with his new human heart, Heather, 29, completed her degree in English and is now working on a master’s degree in healthcare administration, inspired to help others who face what her family did with heart disease.

That experience also prompted her to write a book, Unbreakable: A Father’s Fight to Live. “The (SynCardia Total Artificial Heart) is the only reason my husband is alive today,” she wrote. “I just want everyone to know that there is hope.”

Andrew is emphatic about what the SynCardia Total Artificial Heart does. “At the end, it will save your life.”

SynCardia Systems, Inc. in Tucson, Arizona is the privately-held owner and manufacturer of the world’s first and only FDA, Health Canada and CE approved Total Artificial Heart.

Originally used as a permanent replacement heart, the SynCardia Total Artificial Heart is currently approved as a bridge to transplant for people suffering from end-stage biventricular heart failure in which both ventricles can no longer pump enough blood for a person to survive.

More than 1,300 implants of the SynCardia Total Artificial Heart accounts for over 400 patient years of life on the device. Since January 2011 more than 400 SynCardia Hearts have been implanted.

SynCardia Systems also manufactures the Freedom® portable driver, which powers the SynCardia Heart while allowing clinically stable patients to leave the hospital to live at home and in their communities. The wearable Freedom driver has been used by over 175 patients, accounting for over 100 years of support.