University of Arizona Health Sciences faculty member Laurence Hurley, PhD, professor emeritus in the College of Pharmacy, has been elected as fellow of the National Academy of Inventors (NAI). The NAI Fellows Program highlights academic inventors who have demonstrated a spirit of innovation in creating or facilitating outstanding inventions that have made a tangible impact on quality of life, economic development and the welfare of society. 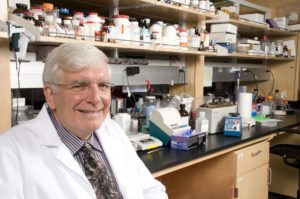 “The news of this award is both humbling and gratifying,” Dr. Hurley said. “Being a scientist has been the great privilege of my life, because it has allowed me to work with brilliant colleagues at great research universities and institutions in Arizona and around the world, collaborating on ways to bring down the most stubborn disease of our time: cancer.”

Dr. Hurley, who is also a member of the UArizona Cancer Center and the BIO5 Institute, is a world leader in the development of G-quadruplexes as drug targets. His work has led to two first-in-class cancer drugs, which have entered Phase I and Phase II clinical trials (Quarfloxin and CX5461). He also defined the mechanism of action of four other drugs introduced into clinical trials.

Dr. Hurley’s work has led to the general acceptance of quadruplexes as a new class of validated targets for drug development. His contributions to science and technology have impacted cancer patient survival, created economic impact, and opened up a new class of molecular receptors that are realizing their importance both to translational science and to patient treatment in the areas of oncology, infectious diseases and neurodegeneration.

Technology licensed from patents awarded to Dr. Hurley has resulted in the creation of four companies, including Cyternex/Cyclene in 2001, which raised a total of $120 million, created more than 30 jobs and brought oncology drugs successfully through clinical trials. He has received numerous national and international awards and has served as senior editor of the Journal of Medicinal Chemistry and as chair of the National Cancer Institute Board of Scientific Advisors. He also is a member of the American Cancer Society Medicinal Chemistry Hall of Fame.

Robert A. Norwood, PhD, a UArizona Optical Sciences professor, also was elected as an NAI fellow this year. He and Dr. Hurley bring to 11 the number of inventors from the University of Arizona who have been elected fellows since Tech Launch Arizona, the university’s commercialization arm, got its start in 2013, said Doug Hockstad, assistant vice president of TLA.

“The university continues to demonstrate that we have created a fertile, supportive environment for academic inventors,” Hockstad said. “We’re proud of Professor Hurley’s and Professor Norwood’s innovations and work with TLA. We look forward to continuing that collaboration to grow the impact of their innovative work.”

Election as an NAI fellow is the highest professional distinction accorded solely to academic inventors. The 2020 class of fellows represents 115 research universities and governmental and nonprofit research institutes worldwide. The new fellows will be inducted at NAI’s annual meeting in Tampa, Florida, in June.

“This award is a tribute to the love and support of my family, the hard work of students, staff and postdocs all along this journey, and especially to my father, who in his last months of life battling pancreatic cancer challenged me: ‘Laurence, you’ve got to do something about this disease,’” Dr. Hurley said. “That is what I have tried to do.”