PHOENIX, Ariz. — Oct. 23, 2013 — Former U.S. Vice President Dan Quayle, who served under President George H.W. Bush from 1989-93, was elected today to the Board of Directors of the TGen Foundation, the philanthropic arm of the non-profit Translational Genomics Research Institute (TGen).

Vice President Quayle attended grade school and high school in Phoenix and Scottsdale and he and his wife, Marilyn, are now residents of Paradise Valley. He brings to the TGen Foundation his vast career experience in politics and financial investment. 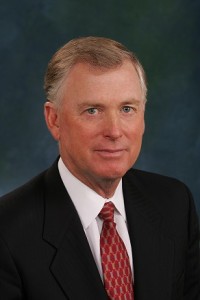 “It is my honor to be selected to be a part of TGen and the phenomenal work this biomedical institute is doing to find better treatments for the most serious diseases affecting humanity,” said Quayle, who also is a former U.S. representative and senator from Indiana, and who today is chairman of Cerberus Global Investments, a private equity company with $25 billion under management.

TGen Foundation Board Chairman Bennett Dorrance welcomed Quayle, noting that he is instantly one of the best known among a cadre of top-flight Arizonans who serve on the non-profit panel.

“Today we welcome Vice President Dan Quayle to our TGen family with high expectations and confidence that he will further enhance our philanthropic reach across the nation and help fuel TGen’s genomic research of the world’s most pressing diseases,” Dorrance said. “We welcome his involvement, his extraordinary relationships and his business acumen.”

“In 1990, the NIH and the Department of Energy joined with international partners in a quest to sequence all 3 billion letters in the human genome. Vice President Quayle is acutely aware of the importance of this public effort, and remains an advocate for genomic research and what is means for our patients,” Dr. Trent said.

TGen Foundation President Michael Bassoff said that the addition of Quayle to the TGen Foundation Board of Directors would undoubtedly be of huge importance to the future of the institute.

He was first elected to the U.S. House of Representatives in 1976 at age 29; to the U.S. Senate in 1980 at age 33; and Vice President of the United States in 1988 at age 41, during which he made official visits to 47 nations and served as chairman of the National Space Council. He has authored three books, including Standing Firm, a vice-presidential memoir, which was on The New York Times best-seller list for 15 weeks.

Quayle also was a distinguished visiting professor of international studies at Thunderbird, The American Graduate School of International Management in Glendale, Arizona.

At Cerberus, one of the world’s leading investment firms, he has been actively involved in new business sourcing and marketing in North America, Europe and Asia. His extensive global network of public and private sector decision-makers, combined with his investment expertise, has significantly contributed to the growth of Cerberus.