When pushing the boundaries of discovery, sometimes even the most experienced of scientists can get a surprise jolt from a completely unpredictable result. 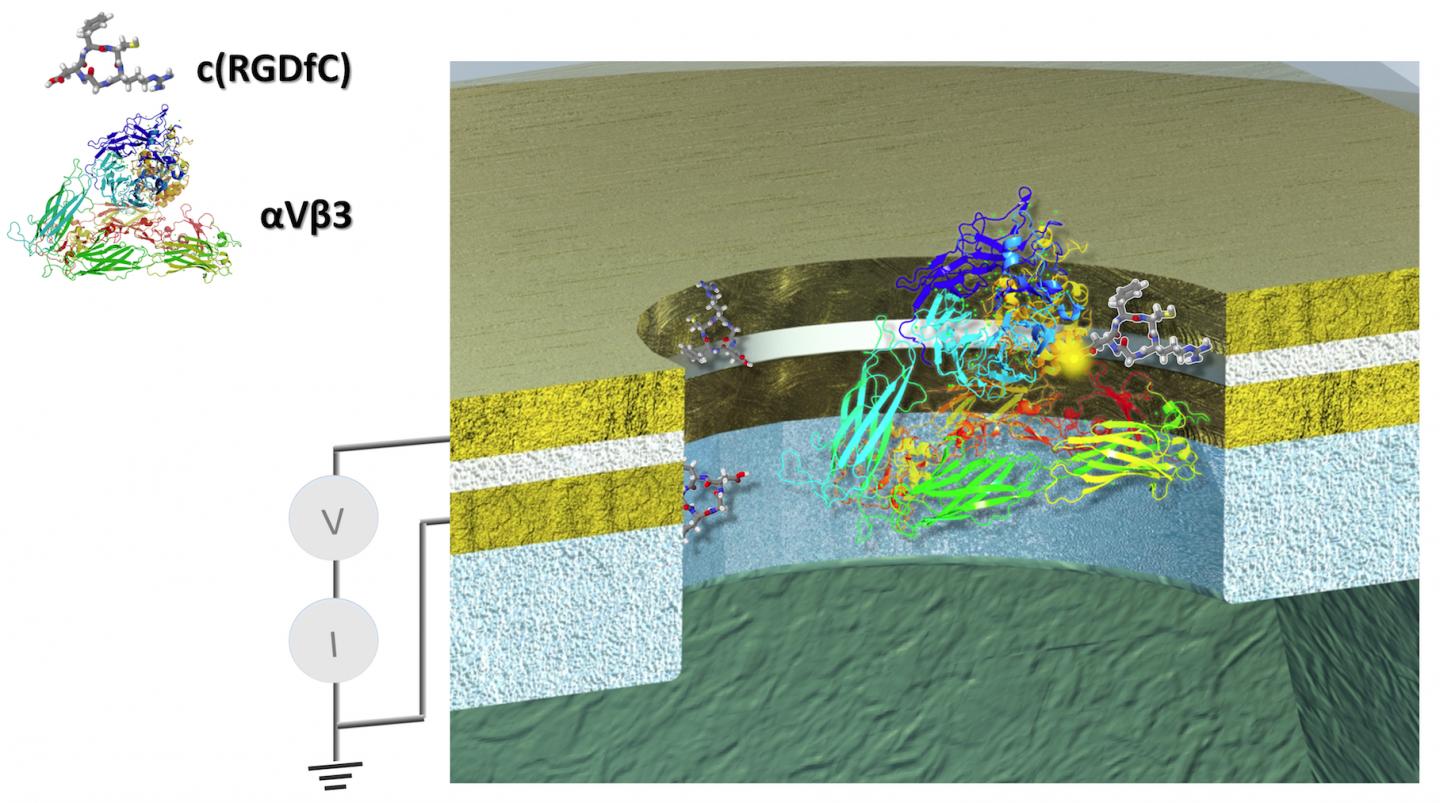 When pushing the boundaries of discovery, sometimes even the most experienced of scientists can get a surprise jolt from a completely unpredictable result.

That was the case for ASU Regents’ Professor and biophysicist Stuart Lindsay, who has spent his career building new microscopes that have become the eyes of nanotechnology and next-generation, rapid and low-cost DNA and amino acid readers to make precision medicine more of a reality.

In the process, Lindsay’s research team has learned a thing or two about how single molecules behave when tethered between a pair of electrodes, which is the foundation for how his DNA readers work.

The technology, called recognition tunneling, threads single molecules down a nanopore like a thread through the eye of a needle.

As they go down the nano-rabbit hole, electrodes measure the electrical properties of these single DNA or amino acid molecules to determine their sequence identity.

Having spent a considerable amount of time building DNA and amino readers, the thought was to give whole proteins a try. “The technological goal here was, can we use our technology to electronically detect whole proteins,” said Lindsay.

But, about four years ago, Lindsay’s research team got a lab result that even he couldn’t quite believe.

As with most scientific surprises, it goes against all conventional wisdom.

“What we’ve done here is to use our recognition tunneling to measure the electrical conductance of intact proteins. The thought was, that if you can specifically trap a whole protein between a pair of electrodes, you would have a label-free electronic reader.”

The potential to have a nanotechnology device sensitive enough to identify a single protein molecule could become a powerful new diagnostic tool in medicine.

But the building blocks in every cell, proteins, were thought to behave electrically as inert organic blobs. Electronically, they were thought to act as insulators, just like putting a piece of plastic over a metal wire.

“There is just a large amount of swept under the rug data on the electrical properties of proteins,” said Lindsay. “There is one camp who dismiss these claims. There is another camp that says proteins are incredible electrical conductors. And never the twain shall meet, just like American politics.”

So four years ago, one of his graduate students at the time, Yanan Zhao, gave the protein challenge. He had tethered a protein between two electrodes, turned up the voltage, and voila! The protein started performing like a metal, with a wild and “remarkably high electronic conductance.”

Now, after years of trying to disprove the results himself and trying to account for every potential wrong avenue or detour, his research group has published their new findings in the advanced online edition of the Institute of Physics journal Nano Futures.

“What this paper is mainly testing out are all the alternative explanations of our data, and ruling out all of the artifacts,” said Lindsay.

The first remarkable results were performed with a technology Lindsay helped spearhead, called Scanning Tunnel Microscopy, or STM. A glue-like protein, called an integrin, that helps cells stick together and assemble into tissue and organs, was used in the experiment.

Extending from the tip of the STM was another electrode attached to a small molecule, called a ligand, which specifically binds to the integrin protein. Once held in place, the STM has a lever arm and probe much like a stylus and needle on a turntable to bring the ligand in contact with its integrin target.

This is where the weirdness began.

“I just didn’t believe it, because what he saw were giant pulses of current when the probe was known to be a great distance from the surface,” said Lindsay.

That gap would have been too great for the electricity to flow through by electron hopping, or tunneling, as what occurs with Lindsay’s recognition tunneling sequencing technology.

Lindsay scratched his head in vain trying to match a theory to explain the phenomena.

“We had this data for a number of years, then I read this paper by Gabor Vattay that involved some absolutely amazing quantum mechanics,” said Lindsay. “It turns out that energy level spacings in a quantum system signal whether the system is a conductor or insulator. There is a special signature of a state poised between conducting and insulating, and Gabor Vattay looked at a bunch of proteins, finding them poised at this critical (and highly improbable) point. An exception was spider silk which is a pure structural protein..”

Basically, the theory suggests that an electrical fluctuation can kick-start a protein into being a great conductor or a great insulator. “It’s just poised to do this fluctuating thing,” said Lindsay.

“In our experiments, we were seeing this weird behavior in this huge protein conducting electricity, but it is not static. It’s a dynamic thing.”

The electronic spikes occurred with increasing frequency as you upped the voltage across the protein. And there is a threshold to cross. “Below a certain bias, it’s just an insulator, but when the fluctuations start kicking in, they are huge,” said Lindsay.

“Because of this, I contacted Gabor, and he had to use some of the best supercomputers in Europe to analyze our large protein. Basically, there are 3 curves for the distribution of energy level spacings, one corresponding to a metallic state, another to an insulator state, and middle third, corresponding to the quantum critical state.”

“Low and behold our protein is in the quantum critical state if you believe the theory.”

Next, Lindsay’s team was able to manufacture a nanodevice to more finely control another series of experiments, with a carefully sized gap to control the protein and the amount of voltage that can be applied to it.

“And the nice thing about having our chips is that we know we can make them small enough to where we just have a single protein molecule there in the gap.”

That was a big change from previous experiments because they didn’t know precisely what was going on at the tip of the STM.

“In the device, you get this beautiful switching on and off of the electrical conductance of the protein,” said Lindsay.

His results have demonstrated that fundamental quantum forces are work to explain the way the integrin protein was behaving in the experiments.

“Basically, we’ve eliminated all of those sources of “I don’t believe this data” and we are still seeing this weird behavior of this huge protein conducting electricity. It’s still there and it’s beautiful.”

It’s also upending the way scientists are viewing the electrical properties of proteins.

“There are people who are beginning to think of proteins as quantum mechanical objects,” said Lindsay.

Next, Lindsay wants to explore other medically important proteins and measure their behavior using the solid-state nanodevices.

Could proteins vital to health and disease turn out to behave like metals? Or insulators?

One thing is certain, an entirely new way of examining protein behavior has opened up new scientific vistas that previously, Lindsay and many others didn’t think was possible.

“I believe the data now, but it’s only one protein so far,” cautions Lindsay.

And for Lindsay, a serial entrepreneur with successful ASU spin-out companies, he may have one more trick up his sleeve to translate a basic discovery into the marketplace.

In addition to Lindsay, Zhang and Vattay, the research team included Bintian Zhang, Weisi Song, Pei Pang, , and Peiming Zhang from ASU’s Biodesign Institute and School of Molecular Sciences, and Department of Physics and and Istvan Csbai from the Department of Physics of Complex Systems, Eötvös Loránd University, Budapest, Hungary.

The work was supported by the National Human Genome Research Institute, Recognition AnalytiX and the Edward and Nadine Carson Presidential Chair fund.