“These outcomes demonstrate that it is feasible to save lives from cardiac arrest through implementing and measuring this key intervention of Telephone-CPR instructions delivered by 9-1-1 dispatchers,” said UA Emergency Medicine researcher Dr. Bentley J. Bobrow. 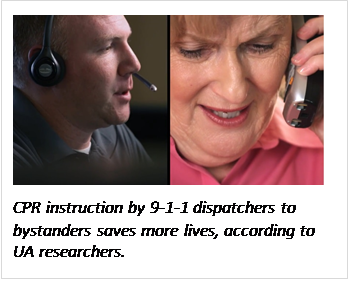 The implementation of a Telephone Cardiopulmonary Resuscitation (TCPR) program increases survival rates and favorable outcomes for patients who experienced an out-of-hospital cardiac arrest, according to a University of Arizona Department of Emergency Medicine study published online in JAMA Cardiology.

“Although out-of-hospital cardiac arrest (OHCA) is a major public health problem in the United States, we have a life-saving treatment – CPR. Most cardiac arrest victims, however, don’t get that treatment before trained rescuers arrive,” said Bentley J. Bobrow, MD, professor at the UA Colleges of Medicine in Tucson and Phoenix and co-director of the Arizona Emergency Medicine Research Center – Phoenix, part of the UA Department of Emergency Medicine. He also serves as medical director for the Bureau of Emergency Medicine Services and Trauma System at the Arizona Department of Health Services.

Bystander CPR (BCPR) has been shown to double or even triple survival from OHCA. Despite decades of public CPR training, in most communities fewer than half of all individuals with cardiac arrest receive any BCPR, and bleak survival rates persist.

In response, both the American Heart Association and the Institute of Medicine have emphasized the importance of telecommunicators (9-1-1 call takers and dispatchers) identifying cardiac arrest and assisting lay rescuers (people without medical training) in providing BCPR to improve survival.

In the study, “Implementation of a Regional Telephone Cardiopulmonary Resuscitation Program and Outcomes After Out-of-Hospital Cardiac Arrest,” 2,334 out-of-hospital cardiac arrests were analyzed by Dr. Bobrow and his colleagues. They examined detailed voice recordings from 9-1-1 calls and linked them with emergency medical services and hospital outcome data. The research took place between October 2010 and September 2013 and was a before-after observational analysis of patients suffering from OHCA.

Researchers found that implementing a bundle of care – including a special guideline-based protocol, TCPR training and quality improvement – resulted in gains in several areas, including a reduction in the time to first bystander chest compression (from 256 to 212 seconds), an increase in TCPR rates (from 44 percent to 53 percent) and most importantly an increase in survival to hospital discharge (from 9 percent to 12 percent) and in favorable functional outcomes (from 5.6 percent to 8.3 percent).

“TCPR training is used today, but not in its most effective way,” Dr. Bobrow said. “The results of implementing this type of training aren’t being measured and continuous quality improvement is not routinely done.

“These outcomes are significant because they demonstrate that it is feasible to save more lives with the 9-1-1- system, which already is in place. This intervention of Telephone CPR instructions should be carefully implemented and continuously measured to assure maximal impact,” Dr. Bobrow said.

Implementing a TCPR program is relatively inexpensive since 9-1-1 centers already are staffed 24 hours a day, seven days a week, and ready to help people with emergencies, he said. The Arizona EMS system has been making steady improvements in its resuscitation system and “this study seemed like the next logical step,” he added.

“We want dispatchers to recognize what cardiac arrest sounds like over the telephone right away,” Dr. Bobrow said. “Ideally, the future of TCPR would be to have all dispatchers and 9-1-1 centers implement TCPR training in their regular training of dispatchers and perform continuous quality improvement by measuring performance.

“I think it’s important for people to know that if they see someone collapse and that person is in obvious distress, to immediately begin chest compressions and have a dispatcher guide them through CPR,” Dr. Bobrow said.

“We are extremely proud of this work by Dr. Bobrow and his team,” said Samuel M. Keim, MD, professor and head of the UA Department of Emergency Medicine, and director of the University of Arizona Emergency Medicine Research Center. “His research is not only ground-breaking, it is saving lives in Arizona today!”

About the University of Arizona Emergency Medicine Research Center

The University of Arizona Emergency Medicine Research Center is part of the University of Arizona Health Sciences, which is the statewide leader in biomedical research and health professions training. The UA Health Sciences includes the UA Colleges of Medicine (Phoenix and Tucson), Nursing, Pharmacy and Mel and Enid Zuckerman College of Public Health, with main campus locations in Tucson and the growing Phoenix Biomedical Campus in downtown Phoenix. From these vantage points, the UA Health Sciences reaches across the state of Arizona and the greater Southwest to provide cutting-edge health education, research, patient care and community outreach services. A major economic engine, the UA Health Sciences employs almost 5,000 people, has nearly 1,000 faculty members and garners more than $126 million in research grants and contracts annually. For more information: http://uahs.arizona.edu