Arizona State University scientists Rosa Krajmalnik-Brown and Heather Bimonte-Nelson at the ASU Biodesign Institute have found that hormones and gut bacteria affect each other, leading to changes in metabolism and brain function. This relationship could be key for treating menopausal symptoms and improving women’s health. 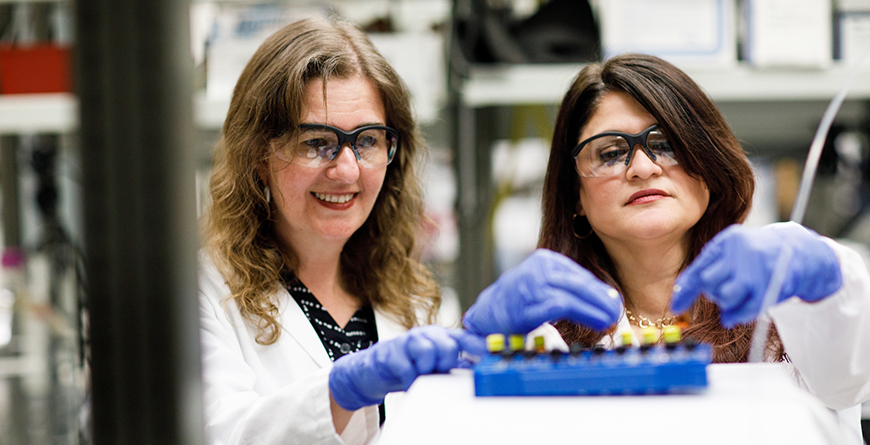 Krajmalnik-Brown and Bimonte-Nelson at the Biodesign Institute. Learning more about the microbiome and its relationship to the rest of the body could give clinicians new tools to improve health, especially for women. Credit: Andy DeLisle

Menopause marks the end of a woman’s fertility, but it can also bring about a slew of other — often baffling — changes, from weight gain to brain fog.

Arizona State University scientists have found that hormones and gut bacteria affect each other, leading to changes in metabolism and brain function. This relationship could be key for treating menopausal symptoms and improving women’s health.

The researchers recently published their findings in Frontiers in Cellular and Infection Microbiology.

Menopause is when a woman stops having periods and can no longer become pregnant. During menopause, the ovaries make less of certain sex hormones, like estrogen and progesterone. There is evidence that these changes raise the risk for health issues like heart disease, obesity, Type 2 diabetes and dementia. To address these risks, many women take supplemental estrogen after reaching menopause.

They found that while untreated menopause causes weight gain, treatment with high- and low-dose estrogen helps prevent this gain.

Another key finding is that menopause changes the community of bacteria living in the gut, which is called the microbiome. The team also saw that there is a link between certain gut bacteria and better memory, but they found this link only in models without menopause.

“Our study discovered that there are unique relationships between gut composition and cognition that seem to depend on hormone status in females. We found that having intact ovaries had a beneficial effect on gut microbiota, and that this profile became altered after surgical menopause,” says Bimonte-Nelson, a President’s Professor in the Department of Psychology who studies how menopause affects cognitive function. “The microbiome could very well guide how menopause and estrogens impact learning and memory.”

“The altered microbiome can have broad impacts on animal behavior and health. Microbe-host interaction is an exciting two-way street!” adds Lydia Zeibich, a co-author of the paper and former postdoctoral researcher at the ASU Biodesign Center for Health Through Microbiomes.

Estrogen treatment after menopause improves microbiome health and helps correct some, though not all, of these changes.

“Chemicals interact with microbes in two different ways. Chemicals change microbial communities, but microbial communities can also change chemicals. We saw a little bit of both in our study,” says Krajmalnik-Brown, director of the Biodesign Center for Health Through Microbiomes and professor in the School of Sustainable Engineering and the Built Environment.

This relationship is important for the health of the whole body, she explains. A hormone can alter the microbiome, and the microbiome can help the body make different chemicals depending on its current state. Krajmalnik-Brown compares these hormones to little taxis that carry signals from the gut to the liver, brain and other parts of the body.

“What happens in the gut doesn’t stay in the gut,” she says.

“I believe this work has opened the door to many exciting future discoveries about the role of menopause and gut microbiota in impacting the brain and body during aging,” says Stephanie Koebele, a co-author of the paper and postdoctoral researcher at the ASU Center for Evolution and Medicine.

Learning more about the microbiome and its relationship to the rest of the body could give clinicians new tools to improve health, especially for women.

“There are many experiments left to do and much left to discover regarding the connections among the gut, endocrine system and brain functioning. Our teams are enthusiastic about working together to uncover these relationships and ultimately enrich the lives of women throughout their lifetime,” Bimonte-Nelson says.

A certain type of bacterium, for instance, could turn out to be important for the process of creating or distributing estrogen. Adding or growing that bacterium through the use of vitamins, prebiotics or probiotics could offer an alternative to hormone therapy.

The potential uses for this type of treatment go far beyond menopause.

“Understanding the role of these microbes and how they’re changing the gut chemistry and possibly the chemistry that goes into the brain could lead to other therapies, not just estrogen addition,” Krajmalnik-Brown says.

Bimonte-Nelson and Krajmalnik Brown credit the late Elizabeth Capaldi Phillips, former ASU provost and professor of psychology, for paving the way for this study by seeing the connections between their research and encouraging them to form an interdisciplinary team

This article was originally posted to ASU News.