Calimmune, Inc.,  HTG Molecular Diagnostics, Inc.,  and VisionGate, Inc.  are picking up the pace and when they reach the finish line we all win.

Making LIFE better is the goal of every life science company.  Bringing life-changing and life-saving innovations to market is never a sprint race.  It’s a journey that has twists and turns, requires specialized talent, capital to fuel its engines,  the courage to take risks, and determination to navigate around obstacles to reach the finish line.

Three Arizona companies are doing just that.  They are not only  growing and passing key mile markers, they are accelerating on their journey to bring hope to patients herein Arizona and around the world.

For their efforts and their progress, Calimmune, HTG Molecular Diagnostics, and VisionGate have been  selected by their peers to be honored as AZBio Fast Lane Companies at the AZBio Awards on October 1, 2015 at the Phoenix Convention Center.  Over 500 leaders from across the state of Arizona, and visitors from across the country and across the world will come together to celebrate with them and thank them for their commitment to making LIFE better.

Calimmune is a clinical-stage, international gene therapy company that has assembled a world-class medical and scientific research team to develop innovative cell-based gene therapies for several disease indications, including HIV. Calimmune is also developing a rich product candidate pipeline to address the needs of different types of individuals at different states of HIV infection and with different levels of treatment experience.  According to the World Health Organization (WHO), there were approximately 35 million people worldwide living with HIV/AIDS in 2013. Of these, 3.2 million were children less than 15 years old.While today’s current therapies are helping patients manage their disease, today there is no cure. If Calimmune is successful in completing this journey, the result will be life-saving for HIV infected patients and life-changing for the people who love them.

Cal-1, the company’s lead therapeutic candidate, is a gene-based therapy engineered to control HIV infection and to protect individuals with HIV from progressing to AIDS. The therapy is currently being evaluated in Phase I/II studies. Cal-1 is designed to reduce production of CCR5, a protein on the surface of white blood cells that plays a critical role in enabling HIV to infect cells. It also has a second mechanism aimed at preventing viral fusion, the process by which the virus enters the cell. This dual approach was shown to be effective against broad strains of HIV in pre-clinical studies.

HTG Molecular Diagnostics’ mission is to empower precision medicine at the local level. Precision medicine is the use of an individual’s molecular profile to guide treatment. The precision comes from advances in genetics and protein biochemistry that allow diseases to be identified and then broken down into subsets based on precise defects that cause the disease.  In 2013, the company commercialized its HTG Edge instrument platform and a portfolio of RNA assays that leverage HTG’s proprietary nuclease protection chemistry. HTG Edge system capabilities have been expanded to fully automate sample and targeted library preparation for next-generation sequencing (NGS).

In 2015, the company completed its initial public offering, receiving net proceeds of $44.2 million.

“After completing our successful initial public offering, we are excited to be working to accelerate our business strategies,” said TJ Johnson, President and Chief Executive Officer. “We continue t make progress in our growth initiatives in panel expansion, market development in reimbursement and key research collaborations, and preparation for our first FDA submission. We believe we are well positioned to participate in the democratization of clinical molecular profiling.”

More than half the people with lung cancer die within one year after being diagnosed, according to the American Lung Association. Lung cancer causes more deaths than the next three most common cancers combined (colon, breast and prostate) and its  symptoms do not appear until the disease is already in an advanced, non-curable stage.

VisionGate, Inc. is led by Dr. Alan Nelson, physicist, bioengineer and entrepreneur who previously developed the world’s first and only automated screening test to detect cervical cancer, marketed today as FocalPoint by Becton Dickinson. The wholly owned VisionGate Biosignature Laboratories (VBL) offers LuCED, a non-invasive diagnostic test for early-stage lung cancer detection with exquisite sensitivity and specificity. This take-home sputum test is processed on the world’s first 3D cell imaging platform, the Cell-CT, named aptly because it is similar in principle to taking a CT scan of individual cells, but using visible light without harmful radiation.

Just two weeks ago, VisionGate presented its blinded study results at the 16th World Conference on Lung Cancer. This study demonstrated 92% sensitivity to lung cancer and 98% specificity. Additionally, in July 2015, VisionGate had two peer-reviewed articles appear in Cancer Cytopathology, a publication of the American Cancer Society. One article covered the technology utilized to render patient results and the other was on LuCED’s clinical performance following a multi-center, international study.   In May 2015, VisionGate received CLIA certification and its laboratory became the first CLIA-certified lab operating in an entrepreneurial incubator in Arizona.

Over the last year, VisionGate secured new clinical collaborators that will assist with an eventual FDA approval. As such, VisionGate was invited to be part of the PUSH trial, which is a follow-up trial to the renowned NELSON trial in the Netherlands. This trial is one of the world’s largest and includes 12,000 lung cancer patients.

VisionGate added collaborations with some of the nation’s top oncology hospitals and lung cancer screening programs and  also added an additional 17 patents to its intellectual property estate over the past year bringing the grand total to 127. VisionGate will move into a 16,000-square-foot facility in Phoenix in October and plans to increase staff from 17 employees to about 50 people over the next 18 months.

In addition to the substantial life-changing and life-saving benefits these  innovations will bring to the people affected by these diseases and the people who love them, these tests and treatments can have a major impact in the future on reducing healthcare costs and bending the healthcare cost curve.

Innovation by definition is making life better.  Arizona life science companies, like Calimmune,  HTG Molecular, and VisionGate will do more than just make life better.   They have the potential to make LIFE better, to help us live longer, and to provide  more timely, more affordable, and more effective healthcare options.

To learn more about the impressive progress these companies are making, visit AZBioAwards.com and click on their award links to read all about them. 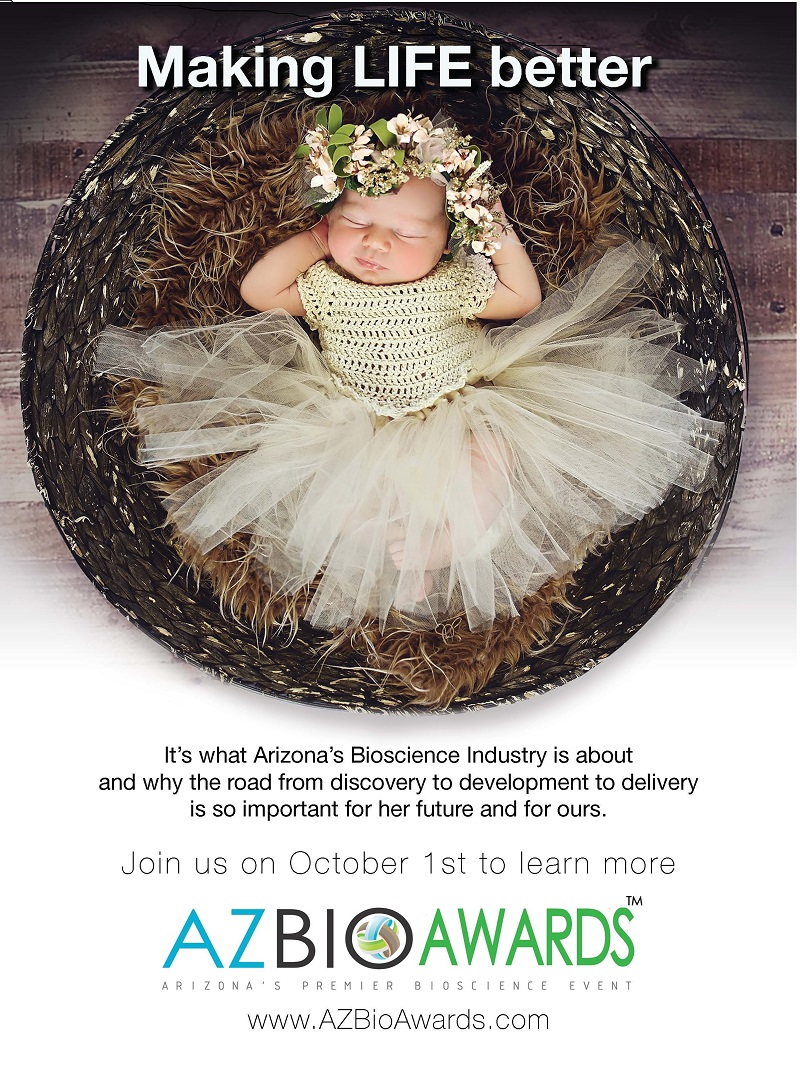