Recognized for his commitment and contributions he has made to healthcare and the community through his leadership, Rich Boals, retired President and CEO of Blue Cross and Blue Shield of Arizona, was conferred an honorary Doctorate of Humane Letters degree by Northern Arizona University (NAU) at the college’s spring 2019 commencement ceremony on Friday, May 10, 2019, in the university’s J. Lawrence Walkup Skydome. 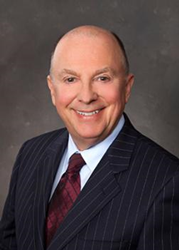 Alongside three additional honorees, the prestigious degree was presented to Rich amidst a graduating class of bachelor’s, master’s and doctorate students within the College Arts and Letters and the College of Health and Human Services Rich delivered a keynote speech highlighting pivotal decision points in his life to the room of nearly 1,000 students.

“Growing up in blue-collar Ohio I would never have thought I’d be standing here today, much less conferred such a prestigious honor,” told the crowd of 10,000 students, faculty, parents, and guests.