Cancer is a protean disease, assuming many forms and disguises. Despite enormous strides in research in past decades, some cancers remain persistently lethal. 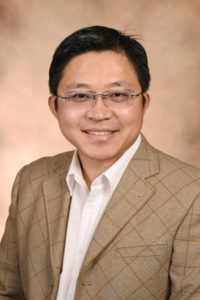 Tony Hu is a researcher in the Biodesign Virginia G. Piper Center for Personalized Diagnostics and ASU’s School of Biological and Health Systems Engineering.

Pancreatic cancer — one of the 10 most common cancers for both men and women — is one such affliction. Pancreatic ductal adenocarcinoma (PDAC), the most common form of the disease, is notoriously difficult to detect in its early stages and has a five-year survival rate of less than 5%.

In new research appearing in the journal Nano Research, Arizona State University researcher Tony Hu and his colleagues describe an innovative method for pinpointing telltale signs of pancreatic cancer well before any clinical manifestations of the disease appear. The technique, which is noninvasive, requiring only a small sample of blood, could revolutionize the early diagnosis of the disease, enabling early, life-saving intervention.

The method described in the new study detects biomolecules in the blood known as peptides — small chains of amino acids. The study results show how a mutation in a cancer-linked gene known as KRAS can set the process of cancer development in motion, leading to a cascade of events that ultimately cause uncontrolled cell division and other hallmarks of the disease.

Further, the study describes the ratio of two forms of a critical peptide that can be detected in blood and used as an early diagnostic biomarker for pancreatic cancer. This ratio is altered by the KRAS mutation.

The advance offers hope of early detection for those stricken with the disease and demonstrates the expanding power of peptidomics — a burgeoning new field of research.

Hu has been interested in peptides and their profound potential in medicine for a number of years, first publishing on cancer-linked peptides in a 2014 paper in Clinical Chemistry.

“There’s an enzyme that is active at the local tumor site in breast cancer, showing dramatically increased expression compared to normal,” he said. “Unfortunately, the enzyme dissolves in the blood and is undetectable.”

The solution was to look at the peptide product produced by the enzyme, which can be profiled directly from the blood. Using this approach, Hu and his colleagues found variations in peptide expression that precisely matched the enzyme activity at the tumor site. The results encouraged Hu that peptides indeed have much to tell us about underlying disease.

Hu is a researcher in the Biodesign Virginia G. Piper Center for Personalized Diagnostics and ASU’s School of Biological and Health Systems Engineering.

Hidden menace
This year, the American Cancer Society estimates over 45,000 people will die from pancreatic cancer. The disease accounts for around 3% of all cancers in the U.S. and around 7% of all cancer fatalities, with a slightly higher disease prevalence in men.

Pancreatic cancer can develop when cells of the pancreas acquire mutations in their DNA, causing cells to grow uncontrollably, eventually forming a tumor. If left untreated, the disease rapidly spreads to nearby organs and blood vessels. Once diagnosed, treatment may include surgery, chemotherapy, radiation therapy or a combination of these.

The pancreas plays a variety of important roles in the body, releasing digestive enzymes as well as hormones that help regulate blood sugar. Pancreatic cancer begins in the tissues of the pancreas, an organ in the abdomen lying horizontally behind the lower part of the stomach.

A family history of pancreatic cysts or pancreatic cancer are risk factors and screening in such patients may help detect presence of disease. Unfortunately, the affliction is seldom diagnosed in its early stages and can spread aggressively in the body. Diabetes is also a risk factor for pancreatic cancer, and may be symptomatic, particularly when accompanied by weight loss, jaundice or pain in the upper abdomen that spreads to the back.

Other factors contributing to the risk of developing PDAC include advancing age, chronic inflammation of the pancreas (pancreatitis), smoking, obesity or a family history of certain genetic syndromes such as the BRCA2 gene mutation.

From health to disease
While many mysteries remain along the path leading to PDAC, one signature event appears to be crucial for tumor initiation — a mutation in an important gene known as KRAS. Mutational modification of this cancer gene (or oncogene) occurs in over 90% of PDAC cancers, making it by far the most important such cancer-linked mutation. The KRAS mutation sets the stage for a precursor of the disease, known as pancreatic intraepithelial neoplasia, which progresses into invasive and metastatic cancer.

Alterations in KRAS cause the loss of tumor suppressor genes that form a critical line of defense against tumor formation in healthy tissue. Mutated KRAS then triggers a cascade of events that switches the machinery of cell division into a permanent “ON” state, leading to unchecked cell growth, proliferation and survival and the formation of tumors. This is an important and unusual distinction in terms of gene mutations, which tend to inactivate genes. In the case of RAS genes however, the effect is to over-activate their cell signaling.

An important way station in the complex, lethal pathway initiated by aberrant KRAS signaling is the activation of the peptide known as bradykinin, which has been implicated in the progression of a number of forms of cancer.

Bradykinin, a peptide belonging to the kinin family of proteins, is known to play a role in cell proliferation, migration, invasion and tumor growth. Under the influence of mutated KRAS, the bradykinin peptide can undergo a post-translational modification known as hydroxylation.

Like proteins, peptides are composed of amino acids, but are smaller molecules, typically assembled from just 50 amino acids or less. Often, they are produced through the breakdown of larger, more complex proteins. Peptide byproducts of the tumor microenvironment circulate in the bloodstream, providing a rich source of potential cancer biomarkers. Currently, they are being actively explored for their diagnostic and therapeutic potential.

A new book, “The Enzymes: Peptidomics of Cancer-Derived Enzyme Products,” co-edited by Tony Hu explores the peptidome in keen detail. The particular focus of the book is how peptides, small segments of linked amino acids, can provide researchers and clinicians with vital clues about cancer prognosis currently unavailable through conventional diagnostic methods.

While the KRAS mutation initiates the onset of cancer, it occurs long before outward signs of the disease are apparent.

The effect of a mutated KRAS gene is to elevate an enzyme known as P4HA1. This enzyme is overexpressed in PDAC tumors, compared to normal and inflamed pancreatic tissues and has been shown to be responsible for production of Hyp-BK, the hydroxylated form of bradykinin in pancreatic cells. (Post-translational modifications of proteins and peptides play a crucial role in the progression of many forms of cancer.)

In the new study, the ratio of hydroxylated bradykinin (Hyp-BK), to normal bradykinin (BK) is detected in samples of blood. To do this, the researchers use tiny beadlike hydrogel particles known as Nanotraps, which may be custom-designed in such a way as to cause the peptides of interest to selectively bind with them. Then, using mass spectrometry, the peptide ratio (Hyp-BK/BK) can be analyzed and used as a highly accurate, noninvasive biomarker for pancreatic cancer.

Mass spectrometry — a technique allowing peptides to be accurately identified based on their molecular weights — revealed that the plasma Hyp-BK/BK ratio was higher in patients with PDAC cancer when compared with pancreatitis patients and healthy controls. The Hyp-BK/BK association with PDAC was also observed to increase with advancing tumor stage.

The research is important not only for its contribution to early detection for this aggressive illness. The study points to possible candidates for intervention in the disease process leading from KRAS mutation to the complex sequence of events that cause pancreatic cancer. Efforts to influence these therapeutic targets may one day offer effective treatment or even prevention of the disease, though much more research is needed.